President’s action on guns draws fire from all sides 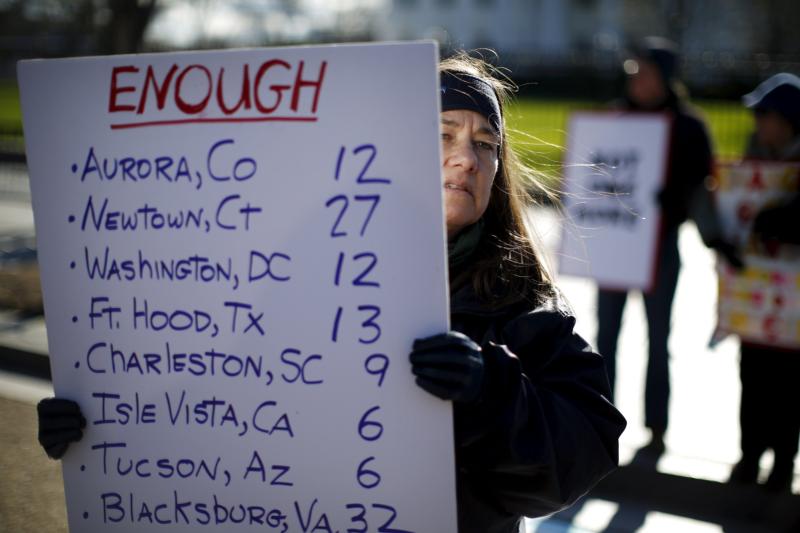 WASHINGTON (CNS) — When President Barack Obama unveiled a series of executive orders Jan. 5 intended to make a dent in gun violence in the United States, people reacted. And how.

“Thank God that someone finally has the courage to close the loopholes in our pitiful gun control laws to reduce the number of mass shootings, suicides and killings that have become a plague in our country,” said Bishop Kevin J. Farrell of Dallas in a Jan. 5 entry titled “The Cowboy Mentality” on his blog.

“Obama’s executive actions, though modest, are first steps in correcting gun laws so weak that they are ludicrous,” Bishop Farrell added. “Congress has unabashedly sold itself to the gun lobby. If there was ever any doubt, its recent action to kill legislation to ban people on the terrorist no-fly list (from obtaining guns) made it obvious.”

“Violence in our society is a complex issue with many facets, taking many forms. While no measure can eliminate all acts of violence which involve firearms, we welcome reasonable efforts aimed at saving lives and making communities safer, said a Jan. 6 statement by said Archbishop Thomas G. Wenski of Miami, chairman of the U.S. bishops’ Committee on Domestic Justice and Human Development.

“We hope Congress will take up this issue in a more robust way, considering all of the varied aspects involved. In addition to reasonable regulation, conversations must include strengthening social services for persons with mental illness, while being mindful that the vast majority of those suffering with mental illness are not likely to commit violent criminal acts,” Archbishop Wenski added.

He noted, “For a long time now, the bishops of the United States have called for reasonable policies to help reduce gun violence.”

That dates back to at least 1994, when the bishops approved a pastoral statement, “Confronting a Culture of Violence.”

Citing data from the National Center for Health Statistics, the statement said, “Between 1979 and 1991, nearly 50,000 American children and teenagers were killed by guns, matching the number of Americans who died in battle in Vietnam. It is now estimated 13 American children die every day from guns. Gunshots cause one out of four deaths among American teenagers.” The bishops added that guns in the United States had quadrupled from 50 million to 201 million between 1950 and 1990. The 2013 estimate: 300 million.

“Curbing the easy availability of deadly weapons” was one of 14 points in the statement’s “framework for action.” The statement embraced a broad definition of violence, from abortion to war to domestic abuse to capital punishment to “the slow motion violence of poverty.” 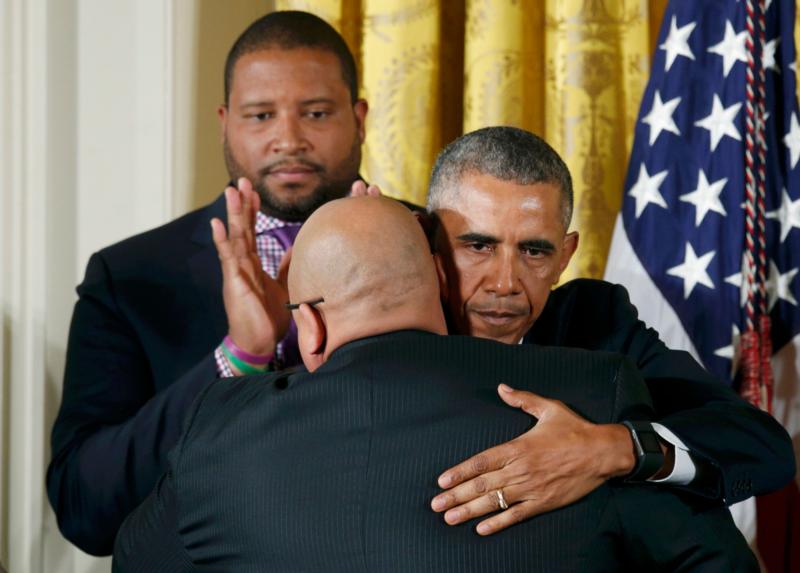 President Barack Obama hugs an unidentified man in the East Room of the White House in Washington Jan. 5 after announcing steps the administration is taking to reduce gun violence. (CNS photo/Kevin Lamarque, Reuters)

The bishops lauded the work of Greater Bridgeport Interfaith Action in Connecticut, which successfully passed a ban on assault weapons later upheld by the courts. “Legislative networks can advocate for public policies,” the statement said, that can, among other things, “prevent and combat crime, restrict dangerous weapons” and promote safe communities.”

The elements of Obama’s executive orders:

* Anyone who sells guns is considered a gun dealer and must get a license and conduct background checks of prospective buyers. The FBI and the Bureau of Alcohol, Tobacco and Firearms will in turn work to speed up the background check process.

* The addition of 200 ATF agents and investigators to enforce gun laws already on the books.

* The expenditure of $500 million to bolster mental health care nationwide, as many who take part in mass shootings have been shown to be mentally ill. Moreover, two-thirds of U.S. gun deaths are suicides.

* Added research into gun safety technology, such as trigger locks and fingerprint verification to keep stolen firearms from being used. “If we can do it for your iPad, there’s no reason we can’t do it with a stolen gun,” Obama said at the White House event unveiling the executive orders. “If a child can’t open a bottle of aspirin, we should make sure that they can’t pull a trigger on a gun.”

Not everyone was receptive to Obama’s executive orders.

David Daleiden, founder of the Center for Medical Progress, which released a series of surreptitious Planned Parenthood videos last year, said in a Jan. 6 statement, “Yesterday, President Obama wiped tears from his eyes saying: ‘Every time I think about those kids, it gets me mad.’ Mr. President, show the same outrage and compassion for the kids who are killed and harvested for body parts at Planned Parenthood, and parted out and sold across the country like used cars.”

Republican presidential candidates also rejected Obama’s executive orders. “If you live by the pen you die by the pen, and my pen has got an eraser,” said Sen. Ted Cruz, R-Texas. Former Florida Gov. Jeb Bush said he will “fight as hard as I can against any effort by this president, or by any liberal that wants to take away people’s rights that are embedded in the Bill of Rights, embedded in our Constitution.” Gov. Chris Christie of New Jersey called Obama a “petulant child.”

The Franciscan Action Network said in a statement, “Three years ago, FAN was a strong supporter of the bipartisan Manchin-Toomey proposal which would have expanded background checks had it not failed in the Senate. In those three years since, there have been multiple mass shootings plus killings every day in cities, towns and rural areas across the United States. We applaud yesterday’s statement by President Obama and encourage Congress to follow his lead and revisit gun safety legislation.”

“My heart aches that gun violence in the United States is all too common, said a Jan. 5 statement by Sister Simone Campbell, a Sister of Social Service who is executive director of Network, the Catholic social justice lobby. “Today President Obama has taken action to do what he can while Congress has refused to act. It is urgently needed that we take a step beyond lamentation toward action to effectively prevent further killing. We, as a people, must move to action rather than be mired by apathy.”

Liza Gold, a clinical professor of psychiatry at Georgetown’s medical school, said in a separate Jan. 5 statement, “President Obama’s executive actions following the Newtown massacre (in which 26 people, including 20 children, died at Sandy Hook Elementary School in Connecticut) lifted the ban on federal funding for the CDC (the federal Centers for Disease Control) to conduct research regarding gun violence. Nevertheless, Congress has refused to pass proposed legislation that includes such funding. We encourage the executive and legislative branches of the federal government to also allocate funds for research that can guide policy.”

PREVIOUS: Ohio parish rebuilds two years after being destroyed in a tornado