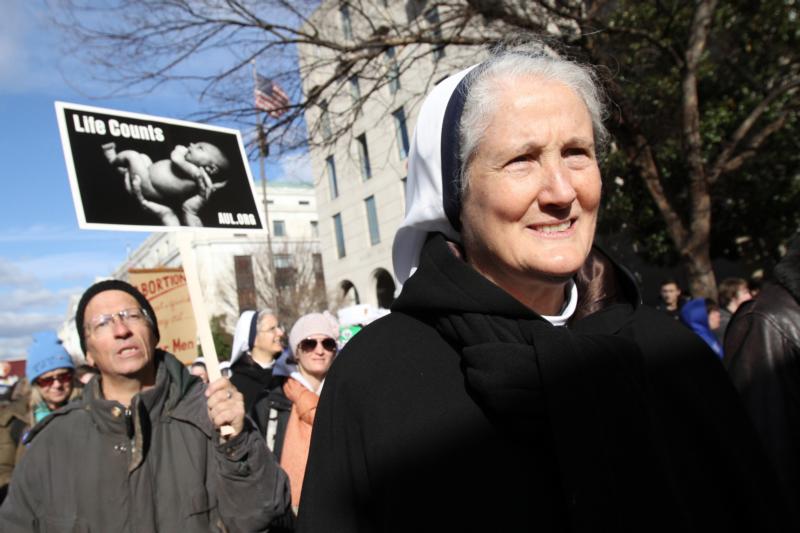 Mother Agnes Mary Donovan, superior general of the Sisters of Life, walks with other pro-life advocates during the March for Life in Washington Jan. 22, 2015. (CNS photo/Gregory A. Shemitz)

ST. PAUL, Minn. (CNS) — As a mother of six, Leah Jacobson is watching other parents try to raise children in a society that no longer supports sisterhood among mothers.

And that’s a shame, said the founder and president of The Guiding Star Project, a Duluth-based organization seeking to combine under one roof a variety of holistic health care services for women and families.

“If we stop duplicating services and start using donor dollars to share space … we can save thousands and thousands of dollars that can be directed to services” and better compete with Planned Parenthood through brand power, said Jacobson, 34, a parishioner at St. Joseph in Crosby in the Diocese of Duluth.

“This is so much bigger than abortion. This is about supporting motherhood,” she told The Catholic Spirit, newspaper of the Archdiocese of St. Paul and Minneapolis.

Forty-three years into legalized abortion in the United States — the Supreme Court’s landmark decision of Jan. 22, 1973 — pro-life advocates say their mission to save babies is broader than preventing abortions. These same advocates from several Minnesota-based organizations have been working to change how pregnancy resource centers operate in the advent of smartphones and other technology, which have created new ways women seek information and obtain abortions.

“And in the process, we hope and pray that she chooses life,” Mealey said. “When you respect somebody’s intellect and free will, you come at it very much less about ‘we’re right, you’re wrong’ and more about ‘we actually care about you (regardless of your circumstances)’. We see and respect the human person.”

Focusing on a woman’s or family’s needs during an unexpected pregnancy or other volatile time allows pregnancy resource centers to earn trust and build relationships. What’s most important, advocates say, is that this is done tangibly and not merely through a mission statement.

Mealey acknowledged that while some affiliates of the pro-life movement might prevent abortions through shock or shame, advocates are asking, “At what cost?”

“We want these young women not only to choose life, but also to be effective, strong parents, or to choose adoption,” said Mealey, who serves on Abria’s board and is a parishioner of Holy Family in St. Louis Park. “A lot of these women don’t understand the inestimable worth of their own soul, and so they can’t possibly understand the inestimable worth of their child’s soul.”

Abria Pregnancy Resources is located within five miles of 10 colleges and universities, and a dozen low-income neighborhoods, positioning it to reach people in need of its services. It’s also across the street from the state’s only Planned Parenthood site where surgical abortions are performed and less than a mile down the street from NARAL Pro-Choice Minnesota.

Mealey said Abria’s biggest challenge is reaching millennials (commonly defined as those born between 1980 and 2000) who are highly engaged through mobile devices and also are most likely to have an abortion. That’s why Abria’s website is mobile-friendly, and staff members are capable of providing information via online chat and texting. The next goal is to create a mobile app, Mealey said.

And while they’ve seen success evident in abortion numbers declining longitudinally nationwide, pregnancy resource centers have determined they can propel that trend by reaching people before they’re in a crisis situation by starting important conversations about dignity, fertility and sexual health with adolescents. Abria has a variety of educational programs in the works to accomplish that.

Its growing list of medical services includes personal services such as life coaching. The “vanguard” approach contributes to trust and relationship-building with clients, Mealey explained.

Today, abortion’s implications are magnified when women are able to initiate a chemical abortion in the privacy of their homes using the oral pill RU-486. That, too, is where pregnancy resource centers have a place, Mealey said.

“It’s one thing to go in and have a very sterile ‘medical procedure’ done by a doctor and a nurse, and then it’s over and you don’t see the consequences,” she said. “It’s another to take two pills in your own home, go through the pain, go through labor, and then take the nascent life that is now dead and flush it away — literally — in your own bathroom.”

Mealey noted that Abria wants to add RU-486 reversals to its medical services.

As certified life coaches with Pregnancy Choices in Apple Valley, Kristin Wermus and Kearston Lazaretti have a goal to change the conversation with women who are “abortion vulnerable or determined.”

Most women who walk through their doors seeking a variety of free services are between ages 20 and 24 and want to take a pregnancy test. Upon the result, Wermus, Lazaretti and the center’s other life coach, who’s bilingual, become partners accompanying the women through an eight-week process, providing them “the right tools,” such as connecting them to the values they’ve defined for themselves.

Values, Wermus said, are the first things to go in a stressful situation. Lazaretti noted that their life coaches ask their clients how their decisions honor or dishonor their values. Unfortunately, they said, abstinence isn’t a value for most of the women they coach. And sometimes, women still choose abortion.

Wermus said Pregnancy Choices, founded in 2006, follows the tenants of the Catholic Church, but staff members don’t directly tell a woman she can’t have an abortion.

“We’re called to suffer in this work,” said Wermus, a parishioner of St. Francis of Assisi in Lake St. Croix Beach. “We give all the credit to the Holy Spirit, to Jesus, to God — that we know we might not have prevented this abortion with our conversation, but potentially the second one, because we see a lot of women who’ve already had abortions who come in here because they do want a different choice.”

Even after clients know they want an abortion and that Pregnancy Choices doesn’t provide them or make referrals for them, many women still want to talk.

“(Life coaching) helps us to walk alongside them without taking the responsibility of their choices upon ourselves,” said Lazaretti, a parishioner of All Saints in Lakeville.

Wermus added, “I want every single person who’s going to have an abortion south of the river to come here first. And we have to make that happen, because if we’re not, we’re doing something wrong. I know once we get them through the door, we have the exact structure to help them. But it’s just getting them through that door. Life coaching allows them to choose life because they can see the possibility, rather than the probability. Most of us try to live in probability, which is really about fear.”

Conveniently but coincidentally, an adoption agency is located across the hall. Wermus and Lazaretti said life coaching resulted in three clients choosing adoption in 2015.

Under the Guiding Star model, a variety of fertility, pregnancy and medical service providers are considered tenants in a space the nonprofit owns. Jacobson said tenants agree to Guiding Star’s philosophy statement and have a willingness to work with others. Guiding Star centers cater their services to the community’s needs.

“We’re making strides in changing public opinion on abortion, but until we as a movement can find common ground, the underlying issues of the culture of death aren’t being addressed,” Jacobson said. “Bigger is better to have presence and legitimacy.”