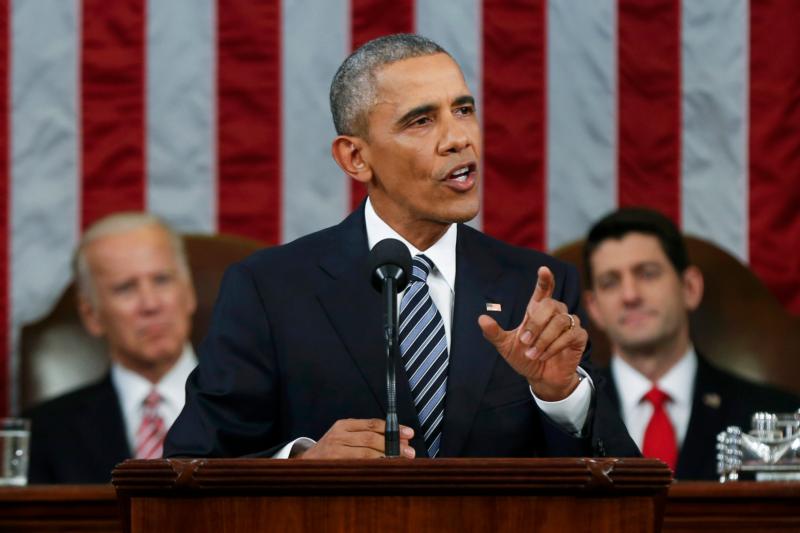 U.S. President Barack Obama delivers his final State of the Union address to a joint session of Congress in Washington Jan. 12. "His Holiness Pope Francis told this body from the very spot that I'm standing on tonight that to imitate the hatred and violence of tyrants and murderers is the best way to take their place," Obama said, adding that hateful rhetoric "betrays who we are as country." (CNS photo/Evan Vucci, Pool via Reuters)

WASHINGTON (CNS) — Although President Barack Obama’s final State of the Union address Jan. 12 hit a fair amount of key Catholic issues, it did not go into detail on them.

The speech focused more on general themes than specific policies, which was not surprising since this is his last term.

He emphasized change and hope for the future and touched on Catholic issues that seemed right out of a Catholic social justice playbook: caring for the poor, protecting the environment, working for criminal justice reform and stemming the tide of drug abuse.

He also spoke about concerns the U.S. bishops or Pope Francis have raised, such as closing the military-run prison at the Guantanamo Bay Naval Base in Cuba, lifting the U.S. economic embargo in Cuba and using military force to stop the Islamic State.

Obama mentioned, but hardly dwelt upon, the need for immigration reform and he also brought up, and defended, the Affordable Care Act, which Catholic leaders have criticized especially for its contraceptive mandate and the absence of a conscience clause.

The president highlighted the need to care for poor and vulnerable, but right after he said this, Twitter feeds churned out comments about the president’s failure to protect the most vulnerable by favoring the legal right to abortion.

Obama’s speech quoted Pope Francis as it did last year. This year’s quote was more dramatic because the president was able to reiterate the pope’s words delivered from the same podium less than four months ago when he addressed members of Congress.

“Pope Francis, told this body from the very spot I stand tonight that ‘to imitate the hatred and violence of tyrants and murderers is the best way to take their place,'” Obama said, stressing: “when politicians insult Muslims, when a mosque is vandalized, or a kid bullied, that doesn’t make us safer. … It’s just wrong. It diminishes us in the eyes of the world. It makes it harder to achieve our goals. And it betrays who we are as a country.”

A year ago, Obama quoted Pope Francis as saying that “diplomacy is the work of small steps,” referring to the administration’s efforts to normalize relations with Cuba.

Cuba, where the pope spent three days last September, also was a topic in this year’s State of the Union speech when Obama spoke of the success with restoring diplomatic relations last year with Cuba, which opened the door to travel and commerce. He urged Congress to take this one step further by lifting the economic embargo on the country.

In a few words on poverty, something the U.S. bishops and Catholic Charities USA agencies have worked to reduce, the president noted that House Speaker Paul Ryan, R-Wisconsin, has spoken of “tackling poverty” and added that he would welcome a “serious discussion about strategies we can all support, like expanding tax cuts for low-income workers without kids.”

Then in one sentence, which many felt did not give the proper weight to such pressing issues, the president mentioned the need to fix “a broken immigration system” and protect “our kids from gun violence.”

Another quick mention was the hope to work on bipartisan priorities such as “criminal justice reform, and helping people who are battling prescription drug abuse.”

When he mentioned the Affordable Care Act, Obama said it was about “filling the gaps in employer-based care so that when we lose a job, or go back to school, or start that new business, we’ll still have coverage,” adding that nearly 18 million have gained coverage so far.

He also acknowledged that not everyone is on the same page about the health care law by delivering the understatement of the night: “I’m guessing we won’t agree on health care anytime soon.”

The U.S. bishops, who have long advocated for universal health care, are among those in disagreement over the law, primarily because of objections to its conscience infringement, since the act requires health insurance plans to provide coverage for birth control drugs and procedures.

The president also raised the issue of climate change — another topic that not everyone agrees on, including Catholics — but Pope Francis strongly endorsed doing something about in his 2015 encyclical “Laudato Si’.”

Speaking frankly, Obama said: “Look, if anybody still wants to dispute the science around climate change, have at it. You’ll be pretty lonely, because you’ll be debating our military, most of America’s business leaders, the majority of the American people, almost the entire scientific community, and 200 nations around the world who agree it’s a problem and intend to solve it.”

Obama did not point out his invited guests as he has in previous years. One seat in the gallery was left empty to symbolize victims of gun violence.

Members of Congress also invited guests to the address who both supported or disagreed with the president’s policies.

Trenna Meins, principal at Sacred Heart School in Cucamonga, California, came to the speech at the invitation of Rep. Mark Takano, D-California. Her husband, Damien, was killed in the Dec. 2 San Bernardino shooting.

Ryan invited two members of the Little Sisters of the Poor to attend. The religious order, which serves the elderly poor, and other Catholic entities have a case before the Supreme Court asking for relief from being forced to comply with the federal contraceptive mandate. Oral arguments in the case will be heard this spring.

Prior to Obama’s address, Melissa Rogers, executive director of the White House Office of Faith-Based and Neighborhood Partnerships, told reporters in a telephone conference that the president would emphasize hope in his remarks. His hope was not “blind optimism,” she said, but something that required courage.

She also said the White House had worked closely with religious communities to balance the administration’s goals.

“We’ll continue to do that until we close up shop,” she added.

PREVIOUS: Moving to her own rhythm, gymnast defies limits of Down syndrome

NEXT: Pro-lifers in U.S. shift approach in current social climate