On his day off, pope makes secret stop at Nativity scene’s birthplace 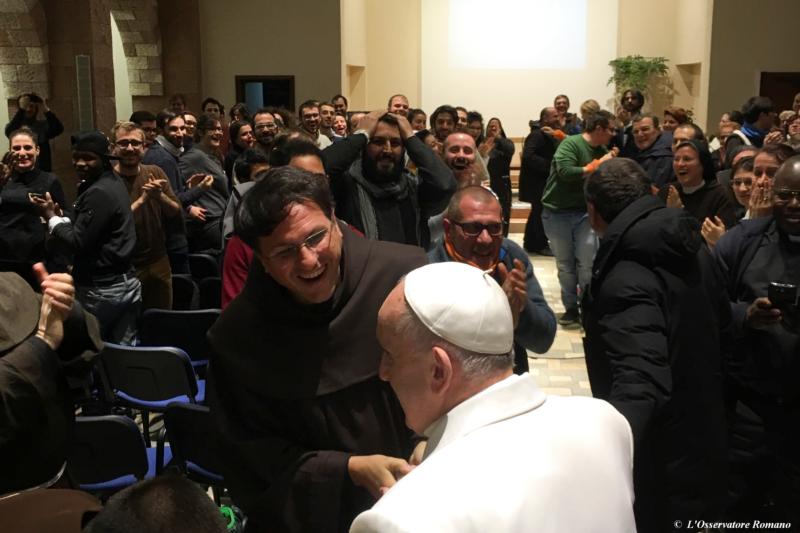 A Franciscan greets Pope Francis during a Jan. 4 surprise visit to the Franciscan shrine in Greccio, Italy. (CNS photo/L'Osservatore Romano)

VATICAN CITY (CNS) — Pope Francis made a surprise visit to the place where his namesake, St. Francis of Assisi, created the world’s first Nativity scene.

“He wanted to visit the sanctuary and places where St. Francis, on Christmas Eve in 1223, represented the first living Nativity in history,” Bishop Domenico Pompili of Rieti told ANSA, the Italian news agency.

The pope had nothing listed on his official schedule, and so he used the free day to visit the Franciscan shrine in Greccio, a town 60 miles northeast of Rome and 56 miles south of Assisi.

The bishop said he and the shrine’s prior were the only people informed a few days ahead of time of the pope’s plans to make the Jan. 4 visit.

As the pope arrived in a blue Ford Focus accompanied by two plainclothes security guards, the shrine’s guardian said he was caught completely off guard. “I didn’t even have my habit on and I quickly went to the refectory to put it on. Then I opened the gate for the pope,” Franciscan Father Alfredo Silvestri told the Italian bishops’ TV2000.

The pope also made an unannounced stop at a local youth meeting organized by the diocese. Amid loud cheers and chants of “Francesco,” some participants were moved to tears.

The pope told the some 150 young people that their bishop had told him it would be a good idea to pray at Greccio during the Christmas season. “So I came to pray. But I won’t say what white lie he used to lure me here,” the pope joked.

In impromptu remarks, the pope told them to reflect on two important signs associated with Christ’s birth: the star of Bethlehem and the baby in a manger.

“The sky is full of stars, isn’t it? But there is one that is special,” the star that inspired the Three Wise Men to leave everything behind and begin a journey into the unknown, he said.

The pope asked the young people to be on the lookout in their own lives for a “special star that calls us to do something greater, to strike out on a journey, to make a decision.”

“We have to ask for this grace of discovering ‘the star’ that God today wants to show me because that star will lead me to Jesus,” he said.

The second sign, which the angels tell the shepherds about, is a baby born in a manger, he said.

This shows, the pope said, how “God lowered himself, obliterated himself to be like us, to walk before us, but with smallness, that is, you can say, humility, which goes against pride, self-importance, arrogance.”

The pope asked them to think about whether their own lives were “meek, humble, (one) that doesn’t turn up its nose, that isn’t full of pride.”

The Three Wise Men were very smart “because they let themselves be led by the star. All the splendor of Herod’s huge palace” did not fool them because they were able to sense right away that the promised king they were looking for was not there, the pope said.

He told the young people he hoped their lives would always be guided by these two signs — two gifts from God. He asked they always have that star that will guide them and “the humility to rediscover Jesus in the little ones, the humble, the poor, in those who are a cast off by society and from our own life.” 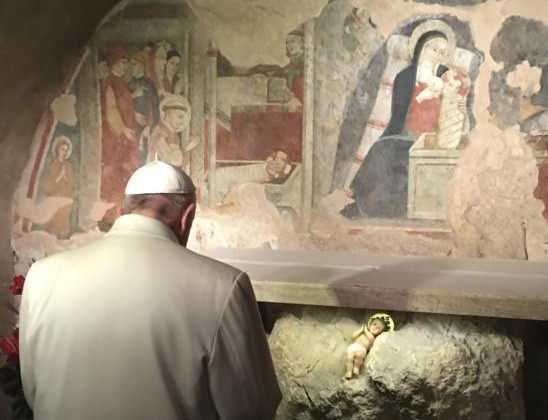 Pope Francis prays in front of a Nativity scene during a Jan. 4 surprise visit to the Franciscan shrine in Greccio, Italy. (CNS photo/L’Osservatore Romano, handout via EPA)