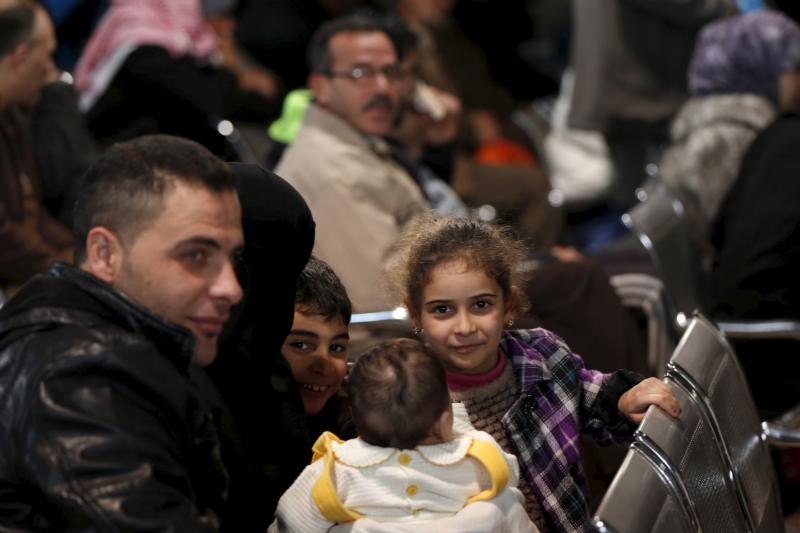 Syrian refugees wait to register at the office of the U.N. High Commissioner for Refugees in Amman, Jordan, Dec. 11. More than 1,000 Syrian refugees in Jordan were interviewed for a potential chance to go to Canada. (CNS photo/Muhammad Hamed, Reuters)

AMMAN, Jordan (CNS) — As a cautious world rang in the New Year with concerns over terrorism and security, Catholics in Canada were continuing to welcome Syrian refugees to their newly adopted homeland.

The Canadian target of accepting 25,000 Syrian refugees by late February “is well in hand, and we should meet it with no problem,” Bruno Saccomani, Canadian ambassador to Jordan, told Catholic News Service Dec. 30. “That includes privately sponsored and government-sponsored Syrian refugees.”

Martin Mark, who directs the Office for Refugees in the Archdiocese of Toronto, told Catholic News Service in early January, “Even in the night, we received new people and also new notices from Amman, the Jordanian capital, that we will be getting around 300 people.”

Canada has one of the biggest resettlement programs in the world for Syrian refugees, and the Toronto archdiocesan office, known as ORAT, provides advice, support and assistance to civic sponsors in Canada, including parishes, communities and universities wishing to aid refugees.

“I consider it as an emergency evacuation because of the large number of people coming and the last-minute arrangements,” Mark told CNS. “The refugees were en route for one or two days and with the excitement; everyone was really tired when they arrived.”

Mark was a refugee from Hungary 15 years ago and said he personally understands the difficulties faced by those escaping conflict and discrimination. The former veterinarian was forced to flee factions in his native Hungary who resented his work on behalf of victims of racism.

Mark said ORAT focuses mainly on privately sponsored refugees. “Only if there is a special need, the government asks us to help with government-sponsored refugees under the joint-assistance sponsorship program,” he said. This is mainly for refugees who face severe medical needs.

“We identify our refugees, select and screen them, do all the preparations and pay the bill,” Mark said of ORAT’s private sponsorship. “So we are financially responsible for each and every refugee that we bring into the country.”

Mark said that in 2015, ORAT initiated sponsorship and resettlement for 2,300 refugees worldwide. Ninety percent, mainly Iraqis and Syrians, came from the Middle East.

Saccomani said increased numbers of Canadian government personnel on the ground in the Middle East have permitted the processing of refugees to go faster to reach the February goal, without sacrificing stringent security measures.

He said immigration, security, medical and military services have been mobilized for the effort in which “normal vetting processes involved with any immigrating to Canada have been maintained.”

“Let’s not forget that security begins with some of the criteria that we have established when it comes to our selection of Syrian refugees,” the diplomat said. “We are selecting from the most vulnerable groups, including resettling intact families, single women, and people with debilitating diseases and injuries.

“The objective is to help Jordan, Turkey and Lebanon move some of the most complicated and vulnerable cases out of their hands and allow us the opportunity to support such countries,” Saccomani added.

The Catholic Church in Canada recognizes that it is not just Syrian refugees that need help at this time, despite Syria representing the largest humanitarian crisis in the world at the moment. Recently Toronto Cardinal Thomas Collins established Project Hope, a special appeal to help refugees from the Middle East.

Mark said the program helps “everybody from the Middle East, not only Syrian citizens, but Iraqis. And we have some cases of Sudanese in Jordan. We include them also to help, because we feel that we cannot send them away, just because they carry different passport.”

Often, Iraqi Christians who fled the Islamic State takeover of their property in the Ninevah Plain in 2014 have been overlooked by the West’s resettlement efforts of Syrians.

Jordan hosts some 630,000 registered Syrian refugees, but the government says when unregistered refugees are included, the figure is much higher. Jordan has praised Canada’s resettlement program and called on other countries to follow suit, particularly those urging Syria’s neighbors to host even more refugees.

Saccomani said it would be impossible to carry out such a comprehensive refugee resettlement program without backing from the Canadian public.

“This would never be able to work had we not received the complete support of the Canadian population. After the Syrians land in Toronto or Montreal,” Saccomani said, “they will be received in over 40 communities across the country.”

“That’s the real secret of this operation. Canadians as a whole have embraced this project as a national Canadian one, and we are all very, very proud to be part of it,” the ambassador added.

“This is faith in practice,” he added. “You can see different groups, some with no personal interests getting involved, just because everybody understands that we need to do something,” he added.

NEXT: On his day off, pope makes secret stop at Nativity scene’s birthplace