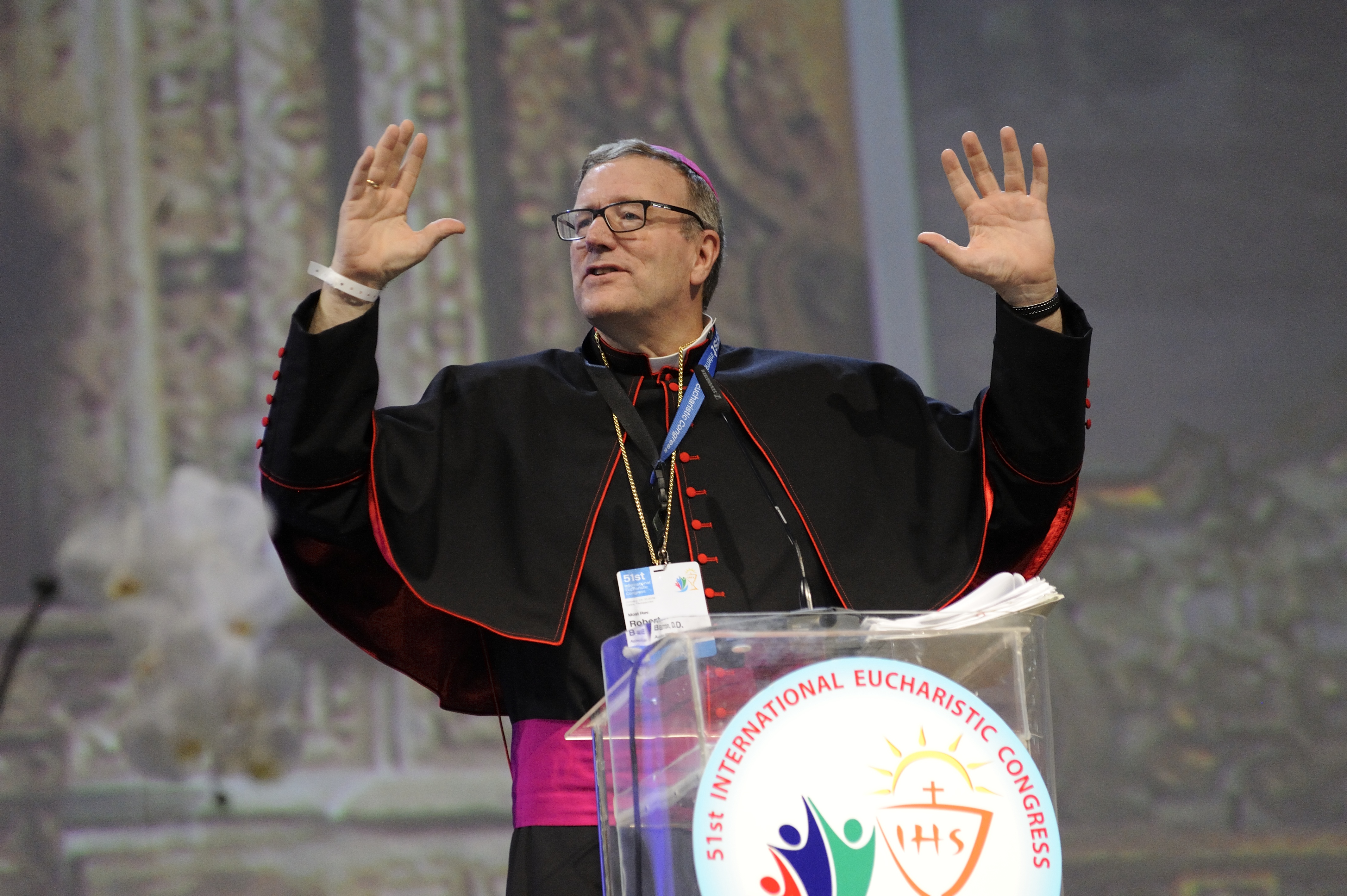 CEBU, Philippines (CNS) — Los Angeles Auxiliary Bishop Robert Barron said popular culture’s message of individuals being “infinitely right” is “repugnant to (Catholics’) eucharistic faith.” But he also said Christianity is “running on fumes” as it tries to counter the trend of people leaving the church or staying away from the Eucharist.

“To stretch out like someone dying of hunger is the right attitude toward the Eucharist,” Bishop Barron said at the 51st International Eucharistic Congress. “What’s sad today is so many in the Catholic world have become blase about the Eucharist.”

The bishop said only 30 percent of Catholics in the United States actually receive Communion, calling this a “disaster.”

At a news briefing after his presentation at the congress, he said that, unlike the German philosopher Friedrich Nietzsche’s ideology of self-invention, Catholic faithful “did not invent (their) own story, we belong to a story” and that is “God’s drama.”

Bishop Barron — author of numerous books and a longtime faculty member, then president of Mundelein Seminary, major seminary of the Archdiocese of Chicago — said the call of the church today is to retain Catholics and attract new ones.

Patrician Brother Peter John Hayes of Ballyfin, Ireland, was in the crowd of about 12,000 who listened, took notes and clicked cameras as the bishop drove home the message of the Eucharist as a meal, a sacrifice and “the real presence” of Christ.

Brother Hayes told Catholic News Service the problem of dwindling numbers of those taking the Eucharist has been on his mind.

“When you wonder, ‘What do we have to do? What can we do? What can I do? … At an event like this … we get it that some of us are on the same road, anyway,” said Brother Hayes.

The bishop used a reading from the Gospel of St. Luke as an example of the two disciples who did not realize that the risen Lord was right next to them on Easter.

Bishop Barron said they were “walking the wrong way,” turning away from God as everyone does, since people are all sinners. And that made it hard to recognize Jesus in their midst. But once they heard his words and were compelled by the power of his life, then begged him to stay, he shared a meal with them and gave the same command he had given the night before he died, “Do this in memory of me.”

People ignore Jesus’ commands all the time, said Bishop Barron, but “over the centuries that one dominical command has been massively obeyed.” That revelation of the pattern of Jesus’ life in the breaking of the bread is the moment the faithful “get it” and are no longer walking the wrong way, he added.

The bishop highlighted the Eucharist as a sacrifice, a theme that he said was the least-known and least-developed.

Bishop Barron emphasized that God does not need the sacrifices of the faithful because he “doesn’t need anything,” but by returning something to God, they “are united to him.”

“The little we bring, if offered to God in the right spirit, breaks against the rock of the divine self-sufficiency and comes back elevated and multiplied for our benefit,” he said.

Julius Maquiling, a eucharistic minister of 25 years from the Cagayan de Oro Archdiocese in the southern Philippines, said he was struck by this concept of sacrifice.

He also told CNS he was touched to be reminded “that the bread is the true bread, Jesus Christ.”

In the talk, Bishop Barron said, “Wealth, pleasure, honor, power … we sinners, we go lusting after them all time, but they won’t satisfy us. Look for eternal things, eternal bread.”

When Jesus says his body and blood are given up for everyone, the bishop said: “If he’s the word of God, what he says is. What he says reaches into the very roots of something and changes it. Really, truly and substantially present, yes.”

NEXT: Children have the right to a mother and a father, Italian cardinal says