Credibility is on the line when Christians offer mercy, pope says in book 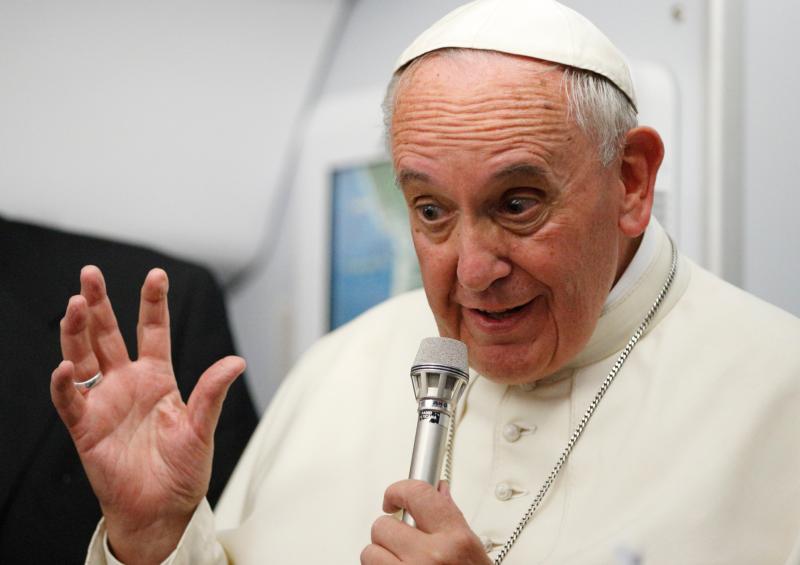 VATICAN CITY (CNS) — Being ministers of God’s mercy, church members overcome “prejudice and rigidity,” taking risks like Jesus did in order to heal and to save, Pope Francis said.

In Jesus’ day, lepers were cast out of the community “to avoid contamination: the healthy needed to be protected,” but Jesus, at his own risk, “goes up to the leper and he restores him, he heals him,” Pope Francis said in a new book-length interview on mercy.

“By welcoming a marginalized person whose body is wounded and by welcoming the sinner whose soul is wounded, we put our credibility as Christians on the line,” the pope told the Italian journalist Andrea Tornielli in “The Name of God is Mercy.”

The book was scheduled for a worldwide release Jan. 12.

In the interview, the pope spoke about experiencing an overwhelming sense of mercy during confession when he was 17 years old, provided more details about stories he has recounted in homilies, explained his comment, “Who am I to judge” about a homosexual person seeking God and discussed the need he saw to invoke a jubilee Year of Mercy.

He also talked about the relationship of mercy and justice and addressed criticism that his focus on mercy amounts to watering down church doctrine and tolerating sin.

Tornielli asked Pope Francis why he so frequently and negatively mentions the “scholars of the law” in his morning homilies. The pope responded that in the Gospels “they represent the principal opposition to Jesus: they challenge him in the name of doctrine” and such an attitude “is repeated throughout the long history of the church.”

“The church does not exist to condemn people but to bring about an encounter with the visceral love of God’s mercy,” Pope Francis said.

Using the example of Jesus’ close contact with lepers despite the Old Testament law that lepers be excluded from the community, Pope Francis said it is obvious that the exclusion of lepers was meant to contain disease, but it led to social and emotional suffering and, what is worse, to a sense that lepers had committed some sin which caused their disease. They were excluded from the community, but also from a relationship with God.

In literally reaching out to lepers, the pope said, Jesus “shows us a new horizon, the logic of a God who is love, a God who desires the salvation of all men.”

Jesus touched and healed the lepers, he continued. “He didn’t sit down at a desk and study the situation, he didn’t consult the experts for pros and cons. What really mattered to him was reaching stranded people and saving them.”

Pope Francis said a similar attitude by the church today “provokes angry mutterings from those who are only ever used to having things fit into their preconceived notions and ritual purity.”

“Caring for outcasts and sinners does not mean letting the wolves attack the flock” or jumping into the darkness with sinners, he said; it means being aware of the reality of sin and sharing the reality that God always is ready to forgive the sinner.

When the grace of God begins to help a person recognize his or her sin and need for forgiveness, the pope said, that person “needs to find an open door, not a closed one. He needs to find acceptance, not judgment, prejudice or condemnation. He needs to be helped, not pushed away or cast out.”

“Jesus sends forth his disciples not as holders of power or masters of a law,” the pope said. “The Christian message is transmitted by embracing those in difficulty, by embracing the outcast, the marginalized and the sinner.”

Obviously, he said, the church cannot and does not pretend sin is unimportant.

But “God forgives everyone, he offers new possibilities to everyone, he showers his mercy on everyone who asks for it,” Pope Francis said. “We are the ones who do not know how to forgive.”

The pope told Tornielli he is convinced that God’s mercy is Jesus’ most important message and that it is a message people today urgently need to hear.

“Humanity is wounded, deeply wounded,” he said. “Either it does not know how to cure its wounds or it believes that it’s not possible to cure them.”

To preach the Gospel, the church must counter an attitude that says there are sins that cannot be healed or forgiven, the pope said.

“The church does not exist to condemn people but to bring about an encounter with the visceral love of God’s mercy,” he said.

Priests, especially in the confessional, must do all they can to communicate God’s love and mercy. If they cannot offer absolution to someone, the pope said, they should at least offer a blessing. The fact that the person entered the confessional is a clear sign of God’s grace already at work.

“As a confessor, even when I have found myself before a locked door,” he said, “I have always tried to find a crack, just a tiny opening, so that I can pry open that door and grant forgiveness and mercy.”

As for his “Who am I to judge” remark to reporters in July 2013 when asked about the church’s attitude toward homosexual persons, Pope Francis said, “I was paraphrasing by heart the Catechism of the Catholic Church where it says that these people should be treated with delicacy and not be marginalized.”

Speaking to Tornielli, Pope Francis made no comment on homosexuality as such, other than to insist that “people should not be defined only by their sexual tendencies.”

“I prefer that homosexuals come to confession, that they stay close to the Lord, and that we all pray together,” he said. “You can advise them to pray, show goodwill, show them the way and accompany them along it.”

PREVIOUS: French bishops ask what has been learned since Charlie Hebdo attacks