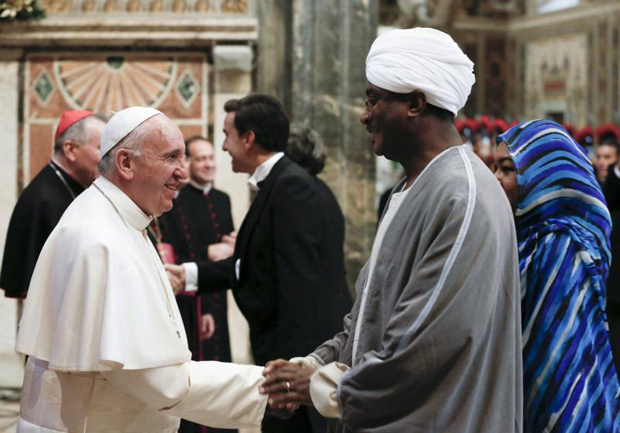 Pope Francis greets an ambassador during an audience with the diplomatic corps at the Vatican Jan.11. (CNS photo/Alessandro Bianchi, Reuters)

VATICAN CITY (CNS) — Cold indifference to migrants, the poor, the hungry and the persecuted must be overcome through the warmth of mercy, which can transform people into artisans of peace, Pope Francis said.

In a lengthy speech Jan. 11 to diplomats accredited to the Holy See, the pope called on the world’s governments to work together to combat the effects of a “culture of waste” that sacrifices “men and women before the idols of profit and consumption.”

Dialogue, he said, is the antidote that can heal the world of the “individualistic spirit” growing in today’s culture, causing indifference toward those who suffer, particularly migrants who only seek to “live in peace and dignity.”

Biblical and human history is marked by countless migrations of those seeking a better life or fleeing circumstances such as war, persecution, poverty or the effects of climate change, Pope Francis said. Unfortunately, their suffering has begun to “appear normal” to too many people.

Making a special appeal on behalf of those fleeing war and religious persecution, the pope said they often find themselves at the mercy of the “powerful who exploit the weak” or turn to human traffickers where they “may well lose their possessions, their dignity and even their lives.” The pope called for an end to human trafficking, adding that “it turns human beings, especially the weakest and most defenseless, into commodities.”

Countries who are taking in migrants, he said, also face hardships and fears, especially due to the growing threat of international terrorism. Despite the difficulties, the pope affirmed his conviction that Europe has the means to “balance between its twofold moral responsibility to protect the rights of its citizens and to ensure assistance and acceptance to migrants.”

Expressing gratitude for initiatives in welcoming migrants, the pope recognized the efforts of countries such as Lebanon, Jordan, Turkey and Greece, who have continued to help and not close their borders. He also commended the Italian government’s commitment to saving lives in the Mediterranean and its taking responsibility for “a massive number of refugees.”

“It is my hope that the traditional sense of hospitality and solidarity which distinguishes the Italian people will not be weakened by the inevitable difficulties of the moment but that, in light of its age-old tradition, the nation may prove capable of accepting and integrating the social, economic and cultural contribution which migrants can offer,” he said.

The cultural implications of migration, particularly in regards to different religious affiliations, also must be addressed, he said. Without “sincere and respectful dialogue,” growing diversity can lead to fears and to viewing others as enemies due to “closed-mindedness and intransigence.”

“Extremism and fundamentalism find fertile soil not only in the exploitation of religion for purposes of power, but also in the vacuum of ideals and the loss of identity — including religious identity — which dramatically marks the so-called West,” he said.

Recalling his apostolic visits in 2015 to Africa, North and South America and Asia, the pope said that mercy was the common thread that linked his journeys, particularly in areas suffering due to war, poverty, social inequality and persecution.

He also warned that the centrality of the family as “the first and most important school of mercy” is threatened by growing efforts to redefine the institution of marriage, “by relativism, by the culture of the ephemeral, by a lack of openness to life.”

“Today there is a widespread fear of the definitive commitment demanded by the family; those who pay the price are the young, who are often vulnerable and uncertain, and the elderly, who end up being neglected and abandoned,” the pope said.

While noting that the new year has begun with tensions, particularly with the recent hydrogen bomb test conducted in North Korea, the pope expressed his hope that those involved in conflicts around the world “will be open to the voice of peace and a readiness to seek agreements.”

And the pope urged the world community to place human dignity at the heart of its humanitarian response in fighting the culture of waste and lack of respect for human life.

“Persons are no longer seen as a paramount value to be cared for and respected, especially when poor or disabled, or ‘not yet useful’ — like the unborn — or ‘no longer needed’ — like the elderly,” he said. “We have grown indifferent to all sorts of waste, starting with the waste of food, which is all more deplorable when so many individuals and families suffer hunger and malnutrition.”

The Holy Year of Mercy, Pope Francis said, can serve as an opportunity to overcome indifference and work toward lasting peace in the world.

“I am certain that this jubilee year will be a favorable occasion for the cold indifference of so many hearts to be won over by the warmth of mercy, that precious gift of God which turns fear into love and makes us artisans of peace,” the pope said.

PREVIOUS: Credibility is on the line when Christians offer mercy, pope says in book

NEXT: The best legacy children can receive from parents is faith, pope says