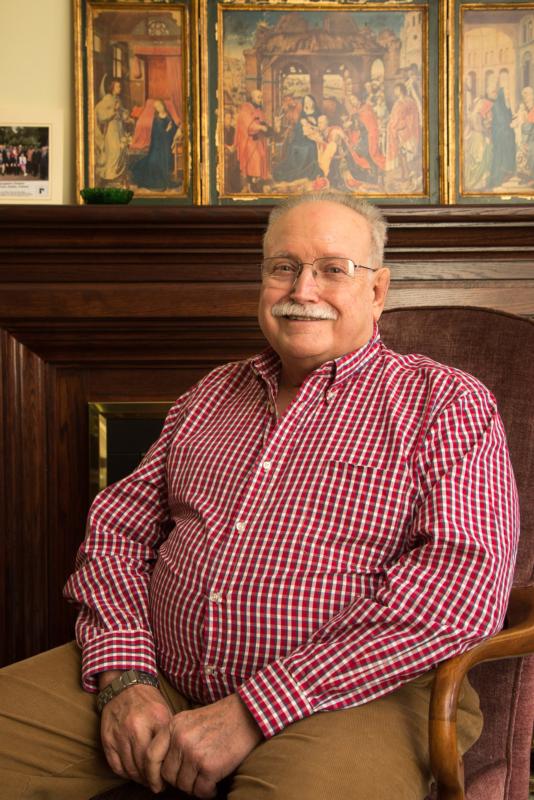 Atonement Father Elias Mallon, pictured in a Jan. 16 photo in Toronto, is a scholar of ancient Near East languages and culture who insists Catholics need to do a better job of reading the difficult texts in the Bible. (CNS photo/Michael Swan, The Catholic Register)

TORONTO (CNS) — Most people have never heard a homily preached on Deuteronomy 20:10-18. It’s kind of difficult to apply these God-given rules of war to daily life in the 21st century.

The part about enslaving the women and killing all the men and boys if the village resists attack has little application when asking a boss for a raise or negotiating a mortgage renewal.

The Bible was written in a very different place at a very different time by people whose self-understanding and world view was formed by forces people today might understand intellectually but struggle to feel deep inside.

Fortunately for Catholics, the war codes in Deuteronomy never quite make it into the lectionary for Sunday readings. Nobody has to preach on them.

Father Elias Mallon, a member of the Franciscan Friars of the Atonement, said it need not be so: It is possible to find some deeper Christian meaning in difficult texts from the Bible. But it requires study and an understanding of the history embedded in biblical literature, which was collected over a 1,000-year span and finally accepted as part of the Bible more than 17 centuries ago.

Father Mallon was recently in Toronto for a three-way discussion among Catholics, Muslims and Jews about reading and interpreting difficult texts. The event was hosted by the Archdiocese of Toronto.

The New York priest has spent a lifetime reading, translating and understanding the ancient languages which, once mastered, gave him insights into the Bible and the monotheistic cultures of the three Abrahamic religions. He’s been a contributor to Muslim-Christian dialogue since 1985, and he is the author of “Islam: What Catholics Need to Know.”

Learning to interpret tricky, terrible and difficult texts in sacred Scriptures is not some obscure, academic challenge. When preachers and ordinary believers misinterpret their sacred texts, the result is almost always fundamentalism, Father Mallon said.

“Fundamentalism is probably, and I mean this sarcastically, the ecumenical reality,” he said. “We all have it. It’s a problem for all of us — Christians, Muslims, Jews, Hindus, Buddhists. Right down the line, that’s the problem.”

Fundamentalism is usually the result of reading an ancient, sacred text as if it were a newspaper or a modern textbook — reading the words without any awareness of the culture or the historical circumstances in which they were first spoken, he said.

The Islamic State, Boko Haram, al-Shabab, Ian Paisley’s “defensive militia” in Northern Ireland, Lebanon’s Phalange militias in the 1980s, volunteer militias in Jewish West Bank settlements all insist on plucking out bits of sacred texts to justify violence. The only way to prevent violent, fundamentalist readings of the Bible and Quran is to know and preach a more accurate, more sophisticated reading, Father Mallon said.

When Moses urges the people of Israel to take “eye for eye, tooth for tooth, hand for hand, foot for foot, burn for burn, wound for wound, stripe for stripe,” the Bible is not urging vengefulness, he said; it’s trying to limit the violence that was a feature of almost every dispute in the cultures of the ancient world. Blood feuds at that time demanded complete annihilation of an enemy. Every insult was met with the threat of murder extending to entire families. “Eye for eye” was a way of limiting the violence.

A thousand years later, Jesus taught in the Sermon on the Mount that limiting the violence was not enough.

The worst readings of sacred literature often come from people trying to read the other religion’s holy book and explain it, he said. When an angry Catholic tells you what the Quran says, a resentful Jew interprets the New Testament or a paranoid Muslim picks at the Bible, one can be sure there is a dangerous misunderstanding.

Swan is associate editor of the Toronto-based Catholic Register.

NEXT: Cardinal confirms some priests decline appointment as bishop