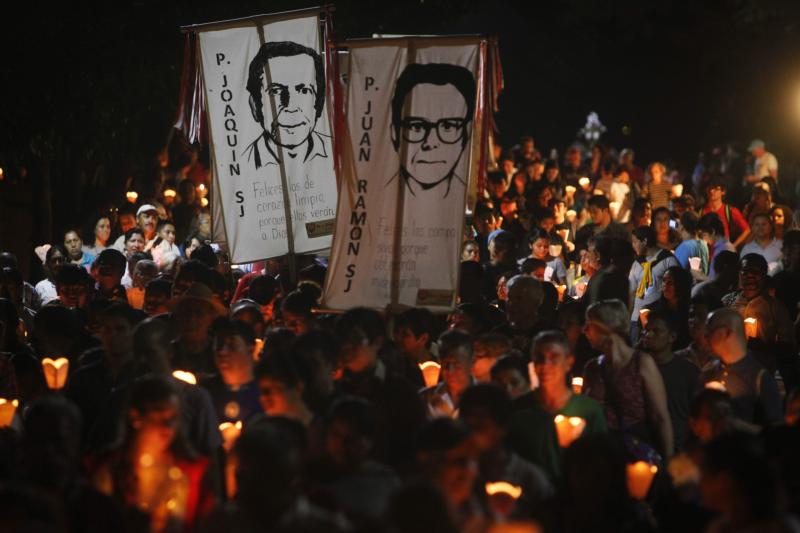 People participate in the "little lanterns march" at the Central American University in San Salvador during the 2015 commemoration of the 26th anniversary of the massacre of six Jesuit priests and two women, murdered in November 1989 by a military commando. (CNS photo/Oscar Rivera, EPA)

A Spanish court has reissued a request for the arrest warrants for 17 Salvadoran military officials and soldiers for their alleged involvement in the killing that shocked this Central American country and the international community.

“We will always be in favor of truth, of justice, in favor of the victims,” Archbishop Escobar said during a Jan. 10 news conference in which he said the files on war crimes investigated in the 1980s by the church’s legal aid office, Tutela Legal, are available for the public and investigators.

“We will be in favor (of clarifying war crimes) and collaborating in what we can collaborate,” he added.

During the 12 years of civil war, which ended in 1992, the lawyers and investigators of Tutela Legal were among the few who dared to investigate cases of torture, murder, and violations of human rights, many of them committed by the right-wing death squads.

Spain seeks the extradition of the military officials, because four of the six Jesuit killed were Spaniards.

On Jan. 5, Spanish Judge Eloy Velasco asked Interpol for the arrest warrants of the military officials, a copy of which was sent to the Salvadoran police. As of Jan. 11, the Salvadoran government had not said why police had not put them under arrest.

Velasco made a similar request in 2011, but Salvadoran authorities said those orders were only for finding the defendants’ location, not a detention. But an August constitutional court ruling said the orders seek not only the location but also the arrest of wanted persons; the ruling opened the way for Velasco to request the detention again.

PREVIOUS: Pope: Prayers of the faithful, not clergy, can make miracles happen