Pope: Prayers of the faithful, not clergy, can make miracles happen 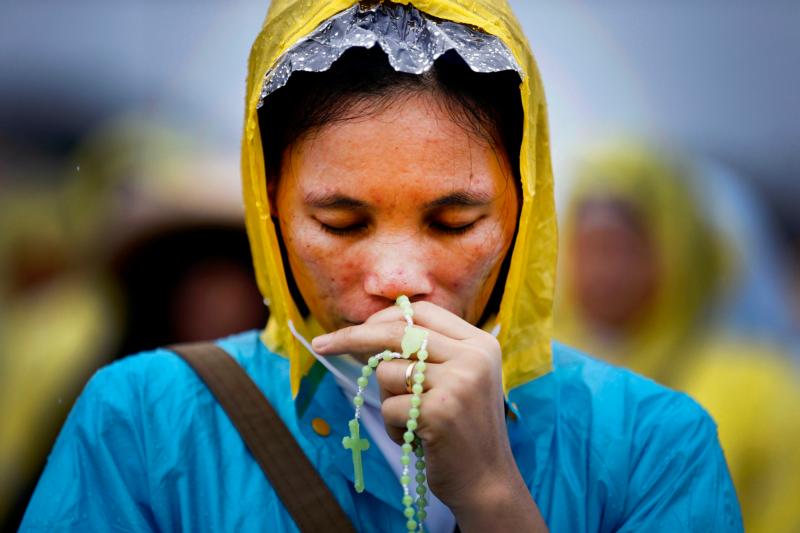 A woman prays in 2015 as Pope Francis celebrates Mass in Manila, Philippines. The prayers of the faithful, not the pope, bishops, priests or nuns, have the power to make miracles happen in the most impossible situations, Pope Francis said at his morning Mass. (CNS photo/Dennis M. Sabangan, EPA)

VATICAN CITY (CNS) — The prayers of the faithful, not the pope, bishops, priests or nuns, have the power to make miracles happen in the most impossible situations, Pope Francis said at his morning Mass.

Saints, like St. Monica, have proven that lives can change if people pray courageously and believe that God “can do everything,” he said Jan. 12.

The pope recalled Hannah’s tearful prayers to God for a child as he reflected on the day’s first reading (1 Sm 1: 9-20) during his homily at the Mass in the Domus Sanctae Marthae.

Her prayer, he said, exemplifies “the courage of a woman of faith” who prays as if she were putting everything she had on the line.

“There are so many good women like that in the church,” the pope said. “Let us think of a great one, St. Monica, who with her tears was able to obtain the grace of conversion for her son, St. Augustine. There are so many who are like that.”

The pope said that he saw his own personal defects in the reaction of Eli, the priest of the temple, who initially assumed Hannah’s tearful pleas to God were due to drunkenness. When someone lacks heartfelt pity, he said, it is difficult to understand another who prays with anguish, like Jesus in the Garden of Gethsemane.

“Jesus knew this prayer in the Garden of Olives, when the anguish and pain were so great that he sweat blood,” the pope said. “And Jesus responded the same way as this woman: with meekness. At times, we pray, we ask the Lord, but so many times we do not know how to arrive precisely at that struggle with the Lord, to the point of tears, to ask for grace.”

Pope Francis recalled a man in his native Argentina who prayed with that same anguish, spending an entire night praying for his daughter’s healing at the gates of the Marian shrine of Lujan. Noting that the man’s daughter was healed the next day, the pope said that is proof that “prayer makes miracles” happen.

“The prayers of the faithful change the church,” he said. “It is not us: the pope, the bishops, the priests, the nuns who bring the church forward, it is the saints! And the saints are these people, like (Hannah). The saints are those who have the courage to believe that God is the Lord and that he can do everything.”

PREVIOUS: Ghanaian bishops: No Guantanamo prisoners in our backyard