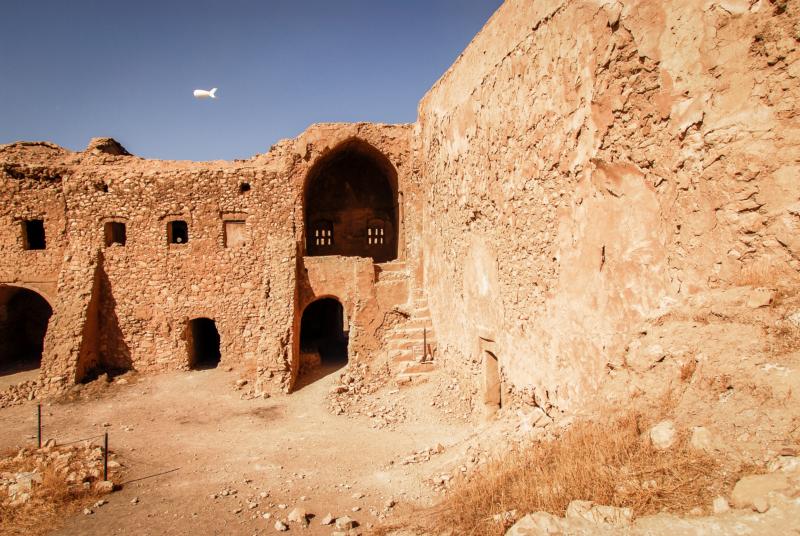 This 2009 photo shows the remains of St. Elijah Monastery in Mosul, Iraq. Islamic State militants claimed responsibility for the recent destruction of Iraq's oldest Christian monastery after a preservation effort was mounted to save the 1,400-year-old site. (CNS photo/courtesy Father Jeffrey Whorton)

“I had the same emotional and perhaps spiritual experience as I did when I was standing over the bodies of fallen soldiers,” Father Jeffrey Whorton told Catholic News Service after seeing pictures of the monastery’s destruction.

Father Whorton served as a Catholic chaplain for the U.S. military in Iraq and holds the rank of major, was instrumental along with others in seeing a preservation initiative mounted on the 1,400-old structure. Father Whorton said he believed he was the last priest in 2009 to “offer Mass on that altar before it was destroyed.”

The last recorded church service in recent years to take place inside the monastery’s walls was the Easter Vigil in 2010, but that was held in the courtyard rather than the altar area.

Reading of the destruction “was that profound and surprisingly strong emotion because of my connection with the monastery,” Father Whorton, who now works at Fort Bragg, North Carolina, told CNS by telephone. “It was a kind of a grief that was like a loss of life almost.”

The Associated Press confirmed the news that the ancient monastery on the outskirts of Mosul had been turned into a field of rubble, with exclusive satellite images published early Jan. 20. Islamic State militants claimed responsibility.

Father Whorton said the chance to both worship and give informal tours of the monastery during his tour of duty in Iraq “was probably the highlight of my entire priesthood.”

“I was able to offer Mass there three or four times on that altar. I was made very aware of the great cloud of witnesses,” said Father Whorton, explaining his sense of those ancient Christians who had worshipped over the centuries at St. Elijah.

“In the forefront of my mind was the reality that in 1700s, 150 or so (monks) had been martyred there,” the American priest said. “So I knew I was in a sacred place offering the holy sacrifice of the Mass. I felt extremely unworthy standing at the venerable altar. That, along with celebrating with the Holy Father, was the highlight of my entire priesthood.”

People were forced to bend down physically to enter the monastery. It was a “humble acquiescence of bending low for this great space that you are entering,” the priest said.

Father Whorton said another unusual feature was a piece of wood shaped like a yoke that stood above the entrance to the nave.

“For me, there was a kind of putting on the yoke of Christ and to bend low into that space where my fallen brothers and sisters had died (centuries ago). It was extremely emotional and a spiritually palpable event for me,” he said of his experience ministering in the ancient monastery.

“God became present once again on that ancient altar as he has done thousands and thousands of time throughout the 1,400 years of its existence. That’s the weight of glory,” Father Whorton said.

Many had voiced concern about the fate of the monastery after Islamic State militants swept into the area in June 2014 and had cut off most communication there. Hundreds of thousands of Christians were forced to flee rather than convert to Islam, pay a protection tax or be killed.

Father Whorton said the finality of ancient monastery’s fate has weighed heavy on him.

“I did not realize until I saw the pictures of the destruction that I would be one of the ones to literally close the door on this ancient church,” he said.

“I hope that I closed it with all the necessary decorum that is due to such a venerable place,” he added.

Assyrian Father Emanuel Youkhana, who heads the Christian Aid Program Northern Iraq, CAPNI, denounced the attack as yet another assault once again on Christians and their heritage in their ancient homeland.

“Dozens and dozens of scientific, philosophic, historical and other books were written or translated in such monasteries. This is a memory of Iraq which has been cut off,” he told CNS.

“When they damage my 2,000 years of Christianity and 5,000 years of Assyrian heritage as the indigenous people of this country, my question is this: If my history is being damaged, my present is being threatened, is there any future?” the cleric asked.

He cited examples of the Islamic State’s bulldozing the Assyrian city of Nimrod, where the Tower of Babel is believed to have existed. The United Nations called its destruction cultural cleansing and a war crime.

Father Youkhana also drew attention to the destruction of archaeological sites in Ninevah along with the forced displacement of Christians and other religious minorities long present in Iraq from their historic area.

He renewed a call for the international community to do more to preserve the Christian presence in their ancient homeland, saying it pained him to see many Christians escaping for safety to the West.

“What will be the future of Oriental Christianity if we don’t protect or give future chances for Christians to survive and to build a future,” he said. “We have to keep this mosaic and diversity, not give up.”

NEXT: Pope asks mercy, pardon for ways Christians have harmed one another