Pope asks mercy, pardon for ways Christians have harmed one another 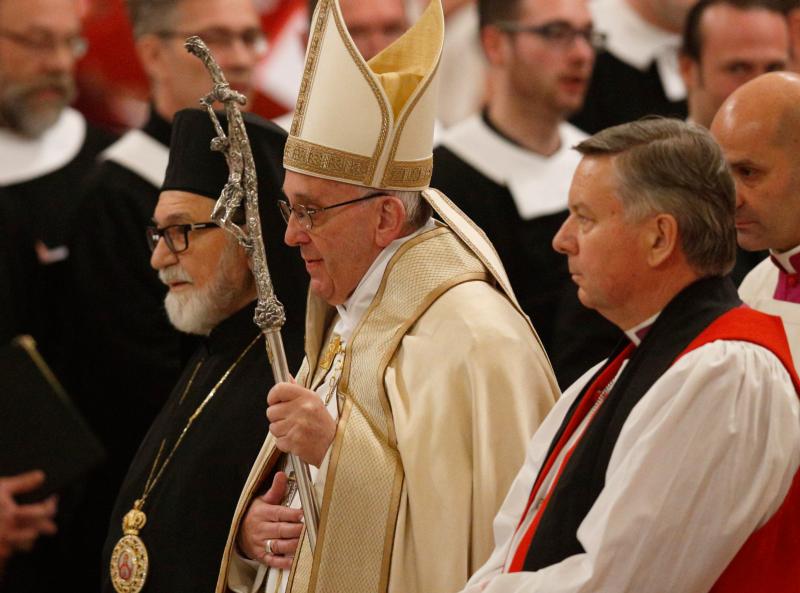 Pope Francis walks with Orthodox Metropolitan Gennadios of Italy and Anglican Archbishop David Moxon, the archbishop of Canterburys representative to the Vatican, as they arrive for a prayer service at the Basilica of St. Paul Outside the Walls Jan. 25. The service concluded the Week of Prayer for Christian Unity. (CNS photo/Paul Haring)

ROME (CNS) — After walking across the threshold of the Holy Door with an Orthodox metropolitan and an Anglican archbishop, Pope Francis invoked God’s mercy upon divided Christians and apologized for times that Catholics may have hurt members of other denominations.

“As bishop of Rome and pastor of the Catholic Church, I want to beg for mercy and forgiveness for un-Gospel-like behavior on the part of Catholics against Christians of other churches,” the pope said Jan. 25 at a prayer service concluding the Week of Prayer for Christian Unity.

“We ask most of all for forgiveness for the sin of our divisions, which are an open wound on the body of Christ,” Pope Francis said.

“At the same time, I ask all my Catholic brothers and sisters to forgive if, today or in the past, they were hurt by other Christians,” he said. “We cannot erase what happened, but we do not want to allow the burden of past faults to continue to poison our relationships.”

As is customary, Pope Francis led the service at Rome’s Basilica of St. Paul Outside the Walls, which tradition holds as the burial site of the apostle. Orthodox Metropolitan Gennadios, representing the ecumenical patriarch, and Anglican Archbishop David Moxon, representing the archbishop of Canterbury, joined the pope in prayer at St. Paul’s tomb at the beginning of the service.

St. Paul and countless Christian martyrs throughout the centuries gave their lives for their faith in Christ and now enjoy “full communion in the presence of God the father,” the pope said in his homily. He prayed the martyrs would sustain today’s Christians with their prayers and their example.

The annual week of prayer ends Jan. 25, the feast of the Conversion of St. Paul. Pope Francis told those gathered in the basilica that “the superabundance of God’s mercy” was the only basis for Paul’s conversion from being a persecutor of Christians to a preacher of the Gospel. Mercy saved him, and proclaiming that mercy to others was the mission he received.

For the 2016 week of prayer, the Pontifical Council for Promoting Christian Unity and the World Council of Churches chose the theme, “Called to proclaim the mighty acts of the Lord,” which is drawn from some translations of the second chapter of the First Letter of Peter.

The passage (1 Pt 2:9,) Pope Francis said, originally was addressed to “members of small and fragile communities,” yet calls them “a chosen race, a royal priesthood, a holy nation, a people of his own.”

Being chosen for salvation, the pope said, inspires “comfort and constant awe” among Christians today just like in the days of Sts. Peter and Paul. “Why me, Lord? Why us,” Christians should and do ask.

The answer, Pope Francis said has to do with “the mystery of mercy and of God’s choice: The father loves everyone and wants to save all,” so he chooses people and sends them out to share God’s mercy and love with others.

“Beyond the differences that still separate us,” he told the ecumenical gathering, “we recognize with joy that at the origin of the Christian life there is always a call whose author is God himself.”

“When all Christians of different churches listen to the word of God and try to put it into practice,” the pope said, “they truly take important steps toward unity.”

“It is not only the call that unites us,” he said, “we are joined by the same mission: to proclaim to all the mighty acts of the Lord.”

“Walking together and working together, we will become aware that we are already united in the name of the Lord,” he said. “Unity is made by walking.”

NEXT: Pope: Live your faith during Lent, perform works of mercy