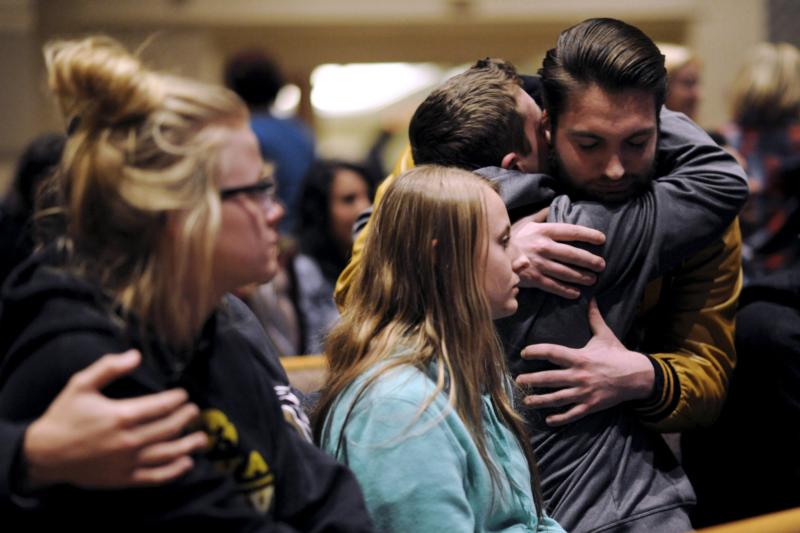 People hug at a vigil after six people were killed in a random shooting in Kalamazoo, Mich., Feb. 21. Kalamazoo Bishop Paul J. Bradley decried the shootings and offered prayers for victims at a Feb. 22 Mass. (CNS photo/Mark Kauzlarich, Reuters) 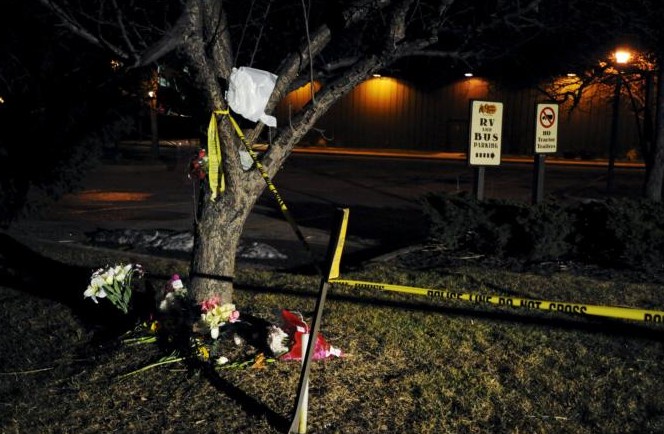 Flowers are placed at a makeshift memorial Feb. 22 near the Cracker Barrel restaurant in Kalamazoo, Mich., where one person died in a random shooting. Five other people also were killed and two others were wounded during the Feb. 20 shootings. (CNS photo/Mark Kauzlarich, Reuters)

KALAMAZOO, Mich. (CNS) — Expressing shock and sadness, Bishop Paul J. Bradley of Kalamazoo offered prayers for the six people who were killed and two others who were injured by a gunman in the western Michigan city.

The bishop also called for an end to all forms of violence in a statement released Feb. 21, the day following the shootings.

Bishop Bradley presided at a Mass for the victims Feb. 22 at St. Augustine Cathedral. Other churches either held prayer services or were planning memorial events for the victims.

Jason Dalton, 45, of Kalamazoo is suspected in the shooting spree that kept the city on edge for several hours. Dalton was arrested early Feb. 21 in downtown Kalamazoo without incident and was being held in jail. He was expected to be arraigned Feb. 22 on murder charges.

Police said the shootings appeared to be random. The first incident occurred about 6 p.m. outside an apartment complex in eastern Kalamazoo County, where a woman was seriously wounded after being shot multiple times.

Four hours later and 15 miles away, police said, a man and his son were fatally shot while looking at vehicles at a car dealership. The last incident occurred 15 minutes later when five women were shot outside of a restaurant, police said. Four of the women died while a 14-year-old girl was hospitalized in serious condition.

“Our thoughts and prayers go out to the families and loved ones of the six innocent people whose lives in this world were so mercilessly ended,” Bishop Bradley’s statement said. “May they live forever with God in the life of the world to come.”

The bishop also offered a prayer for the suspect, asking that God “show him mercy and change his heart.”

The statement also commended first responders for their work to keep Kalamazoo safe.

“May this Lenten season be a time for all of us to turn away from sin and be freed from the strong hold of evil’s influence so that we can live together in security and peace,” the bishop said.