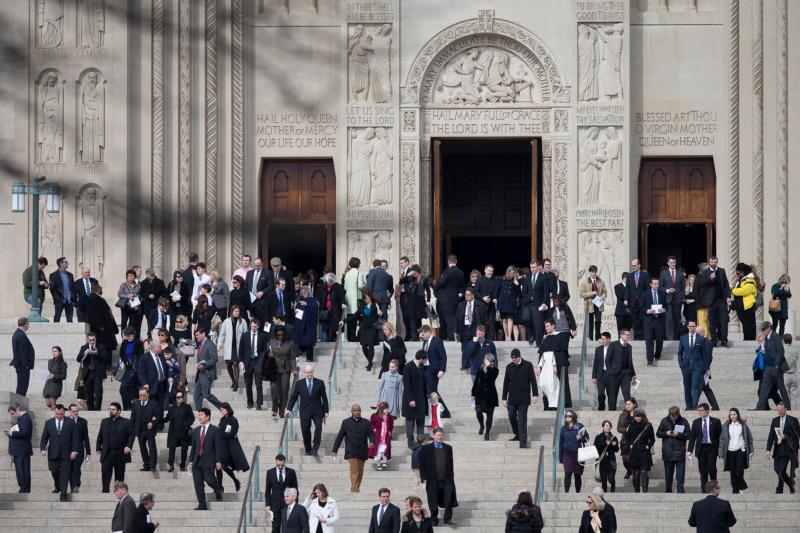 Mourners depart the funeral Mass of the late Supreme Court Justice Antonin Scalia at the Basilica of the National Shrine of the Immaculate Conception in Washington Feb. 20. (CNS photo/Tyler Orsburn)

WASHINGTON (CNS) — Following the Feb. 20 funeral Mass for Supreme Court Justice Antonin Scalia at the Basilica of the National Shrine of the Immaculate Conception, some who attended the funeral shared their profound admiration and fond memories of the late justice.

Michael Novak, a Catholic scholar, theologian and a former colleague of Scalia at the American Enterprise Institute in the 1970s, said the funeral Mass was an event that would have made his old friend very proud.

“It was beautiful, just the way Nino would have wanted it. Every word was just perfect,” he said about the late justice, calling him by his nickname.

Susannah Patton, a member of the John Carroll Society, the sponsor of the annual Red Mass, which Scalia faithfully attended every year, said the Mass was both “joyful and intimate,” even though it was on an historic and grand scale.

Of the late justice’s deep-rooted Catholicism, she said it was incorporated into his life completely. “Justice Scalia’s faith was remarkable,” she told the Catholic Standard, newspaper of the Washington Archdiocese.

Patton, who met the Scalias on several occasions, said she knew the late justice to attend daily Mass at St. Joseph Church on Capitol Hill, the closest Catholic church to the Supreme Court building. She recounted a story she had heard years ago of Justice Scalia comforting a troubled homeless woman at St. Joseph’s after Mass one day.

“He held her hands, talked to her for more than 30 minutes and they both wept,” she said. “That was him. He could be boisterous, but so kind and always full of life.”

Presidential candidate Sen. Ted Cruz, R-Texas, attended Scalia’s funeral before returning to South Carolina for the Republican presidential primary held the same day. Cruz said he had revered the noted jurist since Scalia’s nomination to the nation’s highest court in 1986.

“He was brilliant, passionate and full of life. He knew what he believed. Justice Scalia was fighting for those principles with every passion in his soul. He emanated joy,” he said. “His three decades of service embodied a fidelity to the U.S. Constitution that is the essence of a Supreme Court justice.”

William J. Bennett, former U.S. secretary of education, said he was fortunate to count himself among Scalia’s friends. He said he frequently discussed education issues with the late justice.

Bennett also remembered Scalia’s larger-than-life personality. “He would always come to my brother’s annual Christmas party and none of the lawyers there ever wanted to sing, but he always loved to belt out all the Christmas carols,” he said. His brother, Robert, is a well-known Washington lawyer.

Bennett described the Mass as a “simple, powerful and magnificent” liturgy that honored a great man whose “faith was extraordinary.”

Leonard Leo, executive vice president of the Federalist Society and a close friend of Scalia, served as a lector during the Mass. He said the lessons of Scalia’s life, legal legacy and deep faith were blessings that would long endure.

“He was a justice who was a tremendous blessing to all — his family, his friends and his country,” said Leo. “He was a model of dedication to faith, family and principle, and a model for all of us to conduct our lives with integrity.”

PREVIOUS: The deeper his faith, the better public servant Scalia was, says son

NEXT: Bishop decries shootings in Michigan, prays for victims