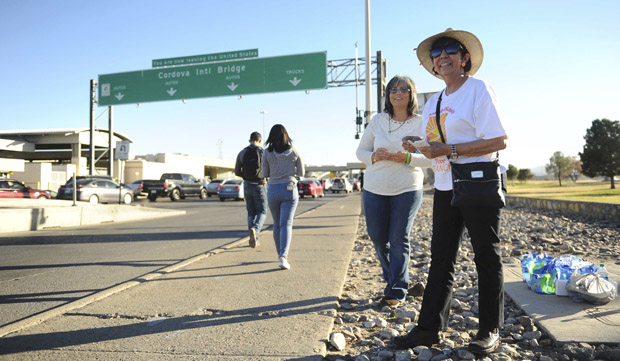 EL PASO, Texas (CNS) — Mexican immigration rates have been down for a while, for a time even reversing.

That reality seems to be absent from political circles and the perception of the general American population. But Diana Martinez is proof of it.

“I am from Chiapas, and just got deported,” Martinez told Catholic News Service in an interview midway on the Paso del Norte border-crossing bridge in the western Texas city of El Paso. “I don’t want to try anymore, just want to go home.”

Although Martinez did not have a specific plan, she was begging for money to afford transportation back to her hometown. “I don’t know how I’ll get there … praying to God is what I can only think of,” said the petite, slender young woman. Asked if she adhered to a certain religion, she said no, answering, “I only believe in God.”

She knew Pope Francis was coming to Ciudad Juarez, Mexico, but that seemed to have little value for her situation.

Martinez was brief in telling CNS about the months it took her to make it across Mexico and into the U.S., and about the several times she has been deported.

In the heat of another U.S. election year, immigration has been a theme for candidates, who have promised to fix the situation, but their words on the issue do not seem to reflect the reality being experienced by immigrants like Martinez.

They are the face of a little-mentioned trend originally reported last November by Washington-based Pew Research Center.

The report, titled “More Mexicans Leaving Than Coming to the U.S.,” has a subtitle that summarizes the whole document: “Net loss of 140,000 between 2009 and 2014; family reunification top reason for leaving.”

Some of the Pew data from the period studied includes:

— One million Mexicans, including U.S.-born children, left the U.S. for Mexico, while an estimated 870,000 Mexicans came to the U.S.

— Sixty-one percent of Mexicans who left the U.S. did so voluntarily; 14 percent of those who left were deported.

— Possible reasons for the decline in Mexican immigration include effects of the U.S. economic recession, resulting in immigrants losing jobs; and a desire to reunite families.

“This shift in immigration is noteworthy. Since 1965, Mexico has sent more immigrants (16.2 million) to the United States than any other country, in what has been the largest wave of immigration in U.S history,” concluded the report.

NEXT: Immigration case a blessing in disguise that highlights migration issues