El Paso Diocese gets ready for rendezvous with Pope Francis 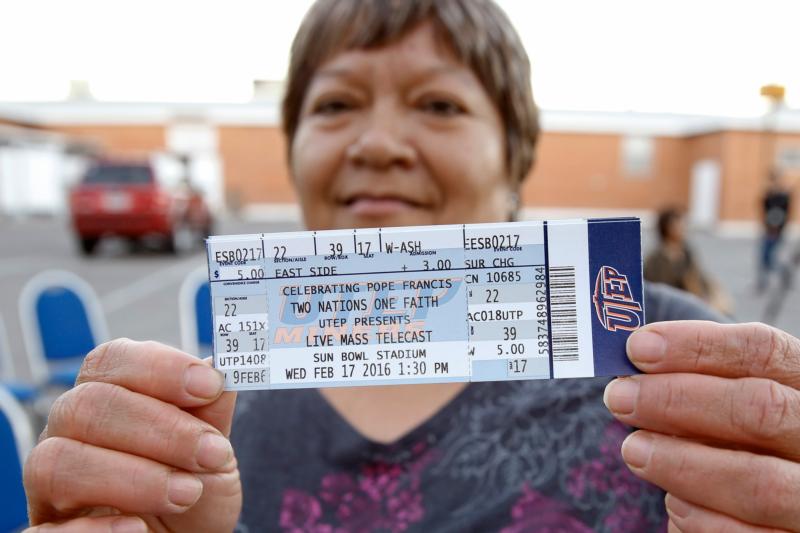 While the Diocese of Juarez’s chancery was bustling with church officials obtaining their papal Mass credentials, El Paso Bishop Mark J. Seitz was handling a full day of meetings, greeting incoming dignitaries and doing media interviews. He closed the day meeting with parishioners at St. Ignatius Church to distribute 200 free tickets to a celebration to be held at the Sun Bowl Stadium Feb. 17.

The bishop said the tickets to the Sun Bowl, priced at $15 for nonparishioners and $10 for parishioners, were selling well, but he was doubtful the event would sell the 51,500 tickets needed to fill it. The 4 p.m. (local time) papal Mass will be simulcasted at the stadium after an afternoon musical show.

“Tickets for the other one were no problem,” he said referring to a gathering scheduled at a reserved area on the edge the causeway of the Rio Grande, the natural U.S.-Mexico border. “There are only 600 (guests) permitted in an area that is very restricted by the Border Patrol.”

Before starting the Juarez Mass, Pope Francis will take some time to pray, not only with Mass attendees, but also with church officials, migrants, refugees, immigration activists, and victims of violence seated across the river.

Bishop Seitz will be in the party receiving Pope Francis to Ciudad Juarez early Feb. 17, and also will stand with the pope when he prays facing the river and greets the people on the opposite side.

“It’s difficult to put into words how wonderful that is, to have the leader of 1.2 billion Catholics of people here, in our region, people who have suffered a good deal from all the violence across the border,” the bishop said.

Bishop Seitz chose St. Ignatius to receive the free tickets because the parish is located close to the area that will be blocked off all day for the river event. Segundo Barrio, as the neighborhood is called, is one of the poorest in the city.

The Diocese of El Paso has a population of 890,500, of which just over 81 percent is Hispanic; 75 percent of the population is Catholic.

“This is one metropolitan area with a line drawn across it,” said Bishop Seitz of the El Paso-Juarez conglomerate. “And yet there are so many things that connect us. This is a very important day here in El Paso even if the pope isn’t physically crossing the border.”

NEXT: Hard data and people’s stories point to fewer Mexicans migrating to U.S.