Priest’s mission starts with getting people to the dinner table 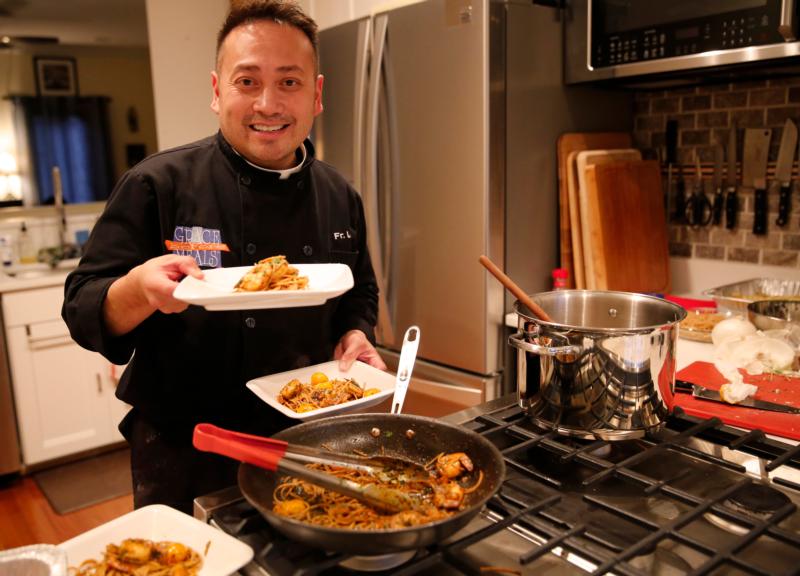 BALTIMORE (CNS) — For Father Leo Patalinghug, faith and food go hand in hand, or in cooking terms, they blend; there is no trick to folding one into the other.

The 45-year-old Filipino-American, known as the cooking priest, has made the blending of those two worlds his life’s work with his apostolate, “Grace Before Meals,” which aims, as he puts it: “to bring families to the dinner table and bring God to the table.”

He not only does a cooking show on the Eternal Word Television Network called “Savoring our Faith,” but he also travels across the country giving parish workshops and speaks at conferences, on radio programs and via social media about the need for families to celebrate not just Catholic feast days but everyday meals together. He also has written three books and is currently working on two more.

Without irony, he says there is a hunger for this ministry, noting that the parish workshops he gives are typically booked, filled with parishioners of all ages interested in how food and faith meet and on connecting or reconnecting with each other and God.

When Catholic News Service met Father Patalinghug at his Baltimore home Feb. 24, he had just returned from a series of parish missions in California and Chicago and was about to leave the next day for the Los Angeles Religious Education Congress. Oh, and he also was having about 30 family members over that night for dinner, so he needed to get meat in the oven and a pasta dish started.

But noting that a busy schedule is pretty much how he rolls, he demonstrated that with some advance planning he could also easily whip up a Lenten meal of brown butter smoked paprika sauteed with cherry tomatoes and shrimp over pasta. 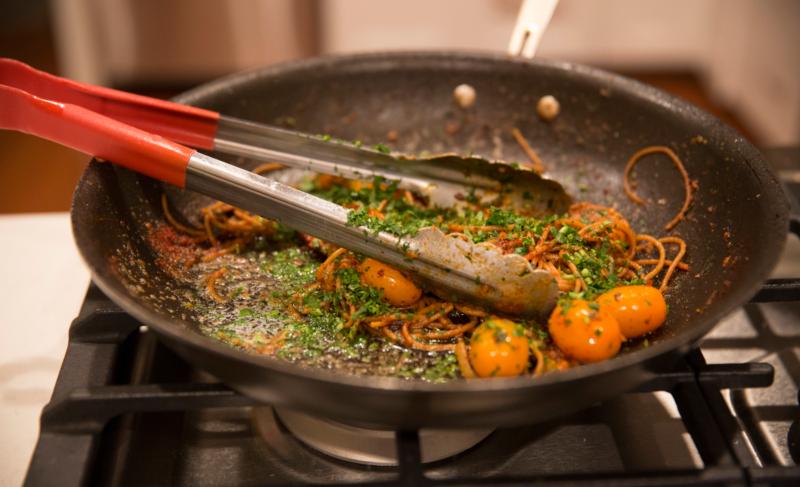 “If a family thinks ahead about what they’re going to do in Lent — as opposed to making it seem like a drudgery” that they have to think of something meatless to eat, he said, they can easily prepare a similar dish and not have to rely on cheese pizza or frozen fish sticks.

Case in point: His simple meatless meal seemed easy to make, looked good when plated, as he put it, and was also really tasty.

That’s part of his ministry, helping people see they can and should eat well and eat together.

The priest has tapped into a current food fascination, popularized by Food Network, the very spot where he gained some notoriety seven years ago when he beat celebrity chef Bobby Flay in a steak fajita cook-off on “Throwdown! With Bobby Flay.”

At that time, the Baltimore priest, who is part of a community of consecrated life called Voluntas Dei, was already doing a cooking show and had written the “Grace Before Meals Cookbook,” but cooking had been part of his DNA long before that.

Over the years, he has occasionally taken cooking classes and when he was in the seminary at the Pontifical North American College in Rome, he ended up picking up tips from chefs at local restaurants.

But what really got his cooking juices going was from being the youngest of four children and growing up in what he jokingly calls “Hotel Patalinghug” because of his family’s hospitality so typical of the Filipino culture. He said he helped or watched his mother cook and they never ate dinner until his father, a doctor, came home from work, usually around 7:30 p.m.

These days, with family get-togethers, he is not always the main cook, because his mom is such a good cook and his family members often bring something.

The go-to meal for the priest who is frequently on-the-run is cooked vegetables and rice and maybe some steak “because who doesn’t like a little meat?”

His kitchen, set up for cooking demonstrations, is uncluttered. The counters are bare and cookbooks are stacked high above cabinets, with the appearance that they are not often needed. On a chopping block is a small wooden statue of St. Pasqual, the Franciscan monk who worked in a monastery kitchen and is considered the patron saint of cooks and kitchens.

Father Patalinghug admits his work is not a traditional ministry, but he said it is meeting people where they are just as Jesus sent his disciples out and told them to “eat what is set before you.”

He gives the example of St. Paul, “who followed such a strict diet, but when he went to evangelize the nations, he had to, for the first time, eat bacon, and he loved it I’m sure.”

He can’t seem to help throwing in cooking terms when talking about his work, noting that Christians are all called to be leaven in society and that his ultimate goal is to bring people back to the Lord’s table.

He also said his ministry provides bait: “Once people nibble on the truth, once they’ve tasted and seen the goodness of God, they hunger for more.”

And he sees the fruit, so to speak, with the response including an email from a woman who told him that after watching his show, she went to church the next day, went to confession and received the Eucharist for the first time in 30 years.

“And I thought, I was just cutting onions, you know? It’s kind of crazy,” he added, “but I was doing it in the name of the Lord.”

NEXT: Rise in extreme poverty traced to 1996 welfare reform law