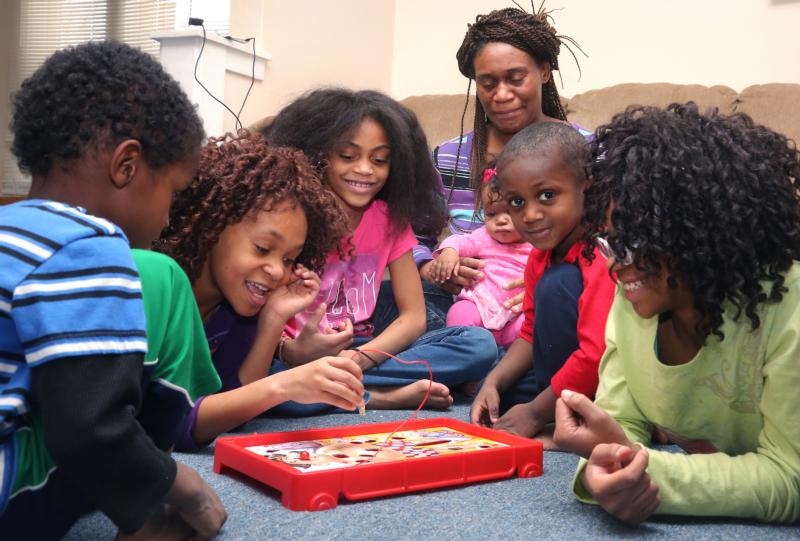 Quinn Washington's family plays a board game Feb. 16 in their new home in Lorain, Ohio. The family lives at what is considered the extreme poverty level. After Washington lost her job in 2014, they faced months of surviving on virtually no income and having to sleep in the family vehicle, shelters and later a motel. (CNS photo/William Rieter)

A single mother of six, Washington, 32, worked long hours to provide for her kids, taking on overtime most weeks at Invacare, a global health equipment manufacturer in neighboring Elyria. When she gave birth to her now 4-year-old son, she kept maternity leave to a minimum.

“Even though I was making good money, I didn’t want to appear to be too lazy,” she said. “So when I had my son I went straight back to work. That’s the way I am.”

Washington’s take home pay was around $900 a week, good salary in this once booming industrial town on the shores of Lake Erie. She rented a nice home in a safe neighborhood, stayed involved with the kids and provided a few extras for her growing family.

Two years ago, it all came tumbling down. Washington was laid off. Within three months, unable to pay the rent, she and the kids found themselves living in the family van for a few days.

“I told my kids we were camping,” she laughed. “We would go off the turnpike in Amherst, where they have a truck area. We would go there to shower.”

In between short stints in the van and short-term jobs, the family would stay in shelters for the homeless. It was not ideal, Washington, said, but better than living on the street. After a while, Washington landed a minimum-wage factory job and the six moved into a motel in Elyria, staying there for about six months.

Cobbling together an existence has not been easy, Washington told Catholic News Service at the Cleveland Diocese’s Catholic Charities Family Center in downtown Lorain. There, staff recently assisted her with obtaining a Section 8 rental subsidy and applying for the Temporary Assistance for Needy Families program.

“The only motivation I have is my children,” she said of her family, now ranging in age from 8 months to 10 years old. “I need to make them dinner. I need to put them to bed every day. I don’t want to be in a situation where I would lose legal custody.”

For much of the past two years, the Washington family had been living on little or no income, in what sociologists and policy experts define as extreme poverty. It’s what the World Bank defines as living on $2 a day or less per person.

The idea of extreme poverty seems foreign in the richest country on the planet. It’s a phenomena, however, that has been growing, particularly among families with children during the last 20 years, argue Kathryn J. Edin and H. Luke Shaefer, co-authors of “$2 a Day: Living on Almost Nothing in America.”

In the book, they deconstruct data gathered by the U.S. Census Bureau’s Survey of Income and Program Participation, which they consider the best available source for identifying household participation in public programs and family incomes among the poor.

Edin, Bloomberg distinguished professor of sociology at Johns Hopkins University, and Shaefer, associate professor of social work and public policy at the University of Michigan, said the increase parallels the years since 1996, when the Personal Responsibility and Work Opportunity Reconciliation Act — known as welfare reform — was adopted. They contend that the prevalence of extreme poverty has risen sharply, especially among those most impacted by welfare reform.

Edin discussed the growth of extreme poverty in Washington during a program sponsored by the Catholic Campaign for Human Development at the annual Catholic Social Ministry Gathering in January.

Welfare reform ended the cash assistance that families received under the Aid to Families of Dependent Children program, which began in 1935 in the midst of the Great Depression. AFDC was replaced by Temporary Assistance for Needy Families, or TANF, which set time limits for recipients to receive aid and implemented a work requirement. In addition, recipients could access funds only through an electronic bank transfer card, limiting where they could purchase needed goods.

Under TANF, states have broad discretion to determine who is eligible for benefits and services. Edin and Shaefer suggest that because TANF is funded as a block grant, giving state officials reason to keep families off the rolls and allowing them to use the funds for other related programs.

Data from the Administration for Children and Families in the Department of Health and Human Services show that a bit more than 3 million people per month received TANF during fiscal year 2015. The U.S. Census Bureau recorded the poverty rate at 14.8 percent in 2014, the latest year for which data is available.

That contrasts with the 12.3 million people who received AFDC during a typical month in 1996, the last year of the program, when the poverty rate stood at 11 percent.

“We’re seeing an awful lot of people coming to us because they have nowhere to live, nothing to eat and they’re frightened,” she said.

Now, the agency is focusing its efforts on members of Congress as representatives prepare to consider the fiscal year 2017 budget. President Barack Obama’s budget proposal released early in February includes $100 million for the emergency food and shelter program, a $20 million reduction from current year funding.

As of Feb. 29, Republicans had yet to submit a budget proposal.

“We’re really concerned about it especially with the pending legislation,” Sister Donna said. “We’re hoping we can focus in to get representatives on both sides of the aisle to speak together and speak with us and talk about some of the potential cuts in the appropriations that would hurt people more.”

Edin said that while the number of people living in extreme poverty is up, many families like the Washingtons are not usually in such a dire situation permanently as they float in and out of the category depending on their circumstances. Still, the numbers are cause for concern, Edin said.

“We believe that a public policy that really violates American values ends up stigmatizing the poor and separating the poor from the rest of society,” she said. “That’s what TANF did.”

In their book, Edin and Shaefer suggest that it’s time to develop programs that would help lift people out of extreme poverty rather than simply meet basic needs. Such policies would incorporate the creation of better paying jobs that respond to family needs, promote families living on their own rather than crowding in with other family members or friends, and recognizing that a work requirement in order to receive public assistance does not fit every family’s situation.

With TANF benefits about to begin, a Section 8 housing subsidy in place and a work-at-home job underway, Washington and her family have escaped — for now — extreme poverty. For that she is grateful. She knows though that their situation can change in a moment.

“This experience changed me,” Washington said. “I wasn’t a mean person, but I was oblivious to a lot that went on to homeless people, to whatever happens. Now I appreciate it because now I’m out of it. It helped me to have more compassion, more empathy for people because it’s not a good situation.”

PREVIOUS: Priest’s mission starts with getting people to the dinner table

NEXT: Elderly urged to ‘live gift of mercy’ by thoughts, prayers for others