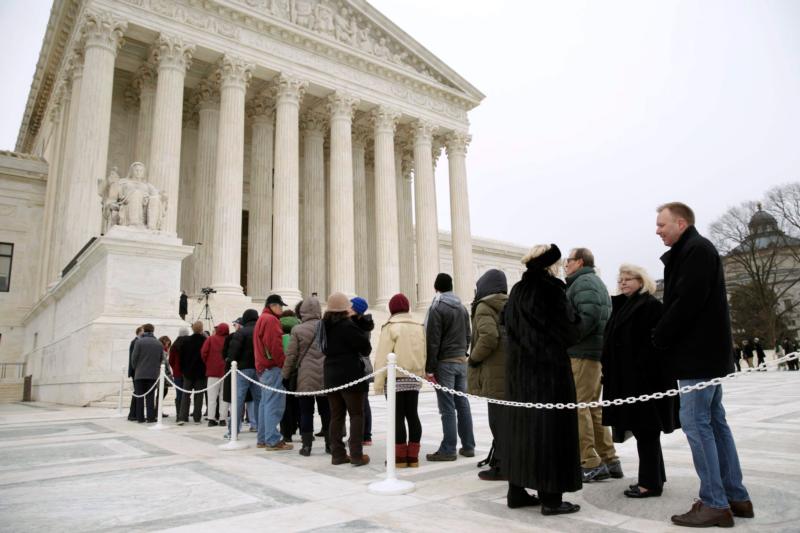 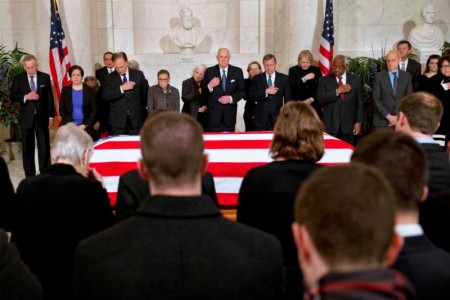 WASHINGTON (CNS) — On most days when the Supreme Court is in session, only a relative handful of people can get inside.

Outside, advocates both pro and con on the major issues of the day fill the sidewalks, ratcheting up the noise and exhorting their followers that their side is on the right side of law and history.

But on Feb. 19, it was just the opposite. Thousands of people passed through the Great Hall of the Supreme Court building to pay their respects to Justice Antonin Scalia, whose body lay in repose the day before his funeral Mass at the Basilica of the National Shrine of the Immaculate Conception.

And outside, as people waited in line for two hours or more to pass by Scalia’s casket, the volume level was turned way down.

One man played songs from a boom box while silently holding a sign saying “God Bless America.” One man asked for change, holding a sign saying he was a veteran. Across the street, a woman dressed in white kept saying “God bless you” to anyone within earshot. But the line — which started on the Supreme Court steps, down a half-block, then around the corner and all the way to the next block and making a hairpin turn all the way back again — seemed relatively quiet for its size. Many chatted. Some stared into their cellphones.

Haley Mathews of Dallas, in Washington for a college internship, was reading the novel “The Orphan Master’s Son.” “I just wanted to see something historic,” she told Catholic News Service. “I don’t agree with all of Justice Scalia’s opinions, but I appreciate his intellect.”

History was on the minds of others in line, too. “My sister-in-law” was the reason he was there, said Tim Barfield of National Harbor, Maryland, a Washington suburb. “This is a one-time thing,” he added. “You may not see it again in your lifetime.” The sister-in-law, Octavia Spencer — an Atlanta lawyer, not the actor — said, “I like history. I’m a history buff.”

Gigi Coriale, a student at Georgetown Visitation High School in Washington, came with her mother, Leigh. She had to cut classes at the end of the school day to be in the line. She said some of her fellow students wanted to come, “but they didn’t know if their parents would agree to let them come.”

“Or,” interjected Leigh Coriale, “they don’t have a cool mom.” She added, “This is one of the great things we have in D.C. It doesn’t matter if we’re politically aligned with them or not. But we get to see them lie in state.”

Others in line appreciated Scalia’s legal philosophy. David Mallof, managing director of Free Access & Broadcast Telemedia, said he has a complaint against the Federal Communications Commission before the U.S. Circuit Court of Appeals for the D.C. Circuit. His lawyer, he noted, clerked for the judge who replaced Scalia after Scalia was appointed to the Supreme Court.

“He was a great jurist,” said Mallof, echoing the sentiments uttered by others to CNS while they waited in line. “We quoted him” in a brief to the appellate court: “You don’t find any elephants in mouse holes.”

“I felt like he was my representative on the court,” said John Morgan of Tampa, Florida, in Washington for a one-year work assignment.

Scalia, who died Feb. 13 while at a Texas lodge on a hunting trip, proved “you can be a dedicated public servant and a faithful Catholic,” said John Caddock of New Jersey, a graduate student in public policy at Georgetown University.

Father Bob Connor, an Opus Dei priest, said he went to high school with Scalia and kept in touch with him and his family through the years. He drove from New York City to Washington Feb. 17 to pass by the casket. Father Connor said Scalia’s family “would be glad to know there are so many of us out here” waiting to pay their respects.

PREVIOUS: Supreme Court without Justice Scalia: Will it lack a tip of the scales?

NEXT: The deeper his faith, the better public servant Scalia was, says son