The deeper his faith, the better public servant Scalia was, says son 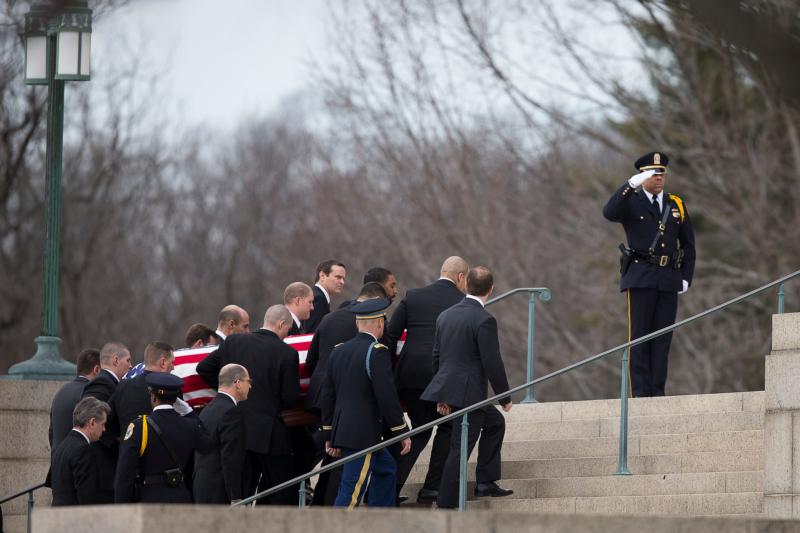 Pallbearers carry the casket of the late Supreme Court Justice Antonin Scalia up the steps at the Basilica of the National Shrine of the Immaculate Conception in Washington for his Feb. 20 funeral Mass. (CNS photo/Tyler Orsburn)

WASHINGTON (CNS) — Just as many pilgrims are passing through the Holy Door at the Basilica of the National Shrine of the Immaculate Conception in this Year of Mercy, the casket bearing the body of the late Supreme Court Justice Antonin Scalia entered through the door Feb. 20.

Father Paul Scalia, the justice’s son and the main celebrant and homilist at his father’s funeral Mass, said the fact that Scalia’s casket was carried through that door of mercy was a great blessing. In his homily, he emphasized that his father was a man of faith, dedicated to his family and service to his country, a man who relied on God’s mercy and was sustained through the sacraments.

“We give thanks that Jesus brought him to new life in baptism, nourished him with the Eucharist and healed him in the confessional,” Father Scalia said in his homily. “God blessed Dad with a deep Catholic faith, the conviction that Christ’s presence and power continue in the world today through his body, the church.”

Speaking of his father’s devotion to his Catholic faith, Father Scalia said, “He loved the clarity and coherence of the church’s teachings. He treasured the church’s ceremonies, especially the beauty of her ancient worship. He trusted the power of her sacraments as the means of salvation, as Christ working within him for his salvation.”

Father Scalia, a priest of the Diocese of Arlington, Virginia, is episcopal vicar for clergy for the diocese, where the late justice lived with his family.

The elder Scalia died Feb. 13 of natural causes while in Texas for a hunting trip. He was 79. He is survived by his wife, Maureen, and by the couple’s nine children and 36 grandchildren.

As bells tolled, family members accompanied his flag-draped casket up the steps into the national shrine and down its main aisle as the congregation sang the hymn “O God Our Help in Ages Past.” The family then sat in a front section as the casket was placed at the base of the steps leading to the main altar.

Other Catholic leaders at the Mass included Auxiliary Bishop Richard B. Higgins of the U.S. Archdiocese for the Military Services; Msgr. Walter R. Rossi, rector of the national shrine; and John Garvey, president of The Catholic University of America. Nearly 100 priests concelebrated the Mass and were joined by about 36 deacons. The congregation of 3,300 people included Catholic laypeople and women and men religious, as well as guests of many different faiths.

The cardinal expressed “our heartfelt sympathy at the loss of your husband, your father, your grandfather and friend, and we once again pledge our prayers that God will grant him eternal rest and grant you comfort and consolation.”

Leonard Leo, a friend of Justice Scalia who is executive vice president of the Federalist Society, read the first reading from the Book of Wisdom, which opened with, “The souls of the just are in the hands of God.” Justice Thomas read the second reading from St. Paul’s letter to the Romans, and Father Colin Davis, a priest of the Diocese of Arlington, read the Gospel reading from St. Matthew.

The Mass included some hymns in Latin, including Mozart’s soaring “Ave Verum Corpus” (“Hail True Body”) sung by the shrine’s choir during Communion. The liturgy also reflected Scalia’s sense of humor, with both Cardinal Wuerl and Father Scalia joking about the family’s desire “for a simple parish family Mass” for the justice’s funeral, which ended up being held in the largest Catholic church in North America to accommodate the number of mourners.

Since his death, Father Scalia said in his homily, the justice had been praised by many for his intellect, his writings and speeches. “But more important to us — and to him — was that he was Dad. He was the father God gave us for the great adventure of family life,” Father Scalia said. “Sure, he forgot our names at times or mixed them up, but there were nine of us!”

The priest also expressed thanks for his parents’ marriage, noting that “Jesus bestowed upon him 55 years of marriage to the woman he loved, a woman who could match him at every step and even hold him accountable.”

“God blessed Dad, as is well known, with a love for his country,” Father Scalia said. “He knew well what a close-run thing the founding of our nation was. And he saw in that founding, as did the founders themselves, a blessing. A blessing quickly lost when faith is banned from the public square, or when we refuse to bring it there.”

Later during the prayer of commendation, Father Scalia, prayed that God would grant the justice a merciful judgment.

As the congregation sang, “O God Beyond All Praising,” Scalia’s casket was carried down the shrine’s center aisle, accompanied as he had been in life by his family, and then they left for his private burial ceremony.