A brotherly embrace brings pope and Russian patriarch together 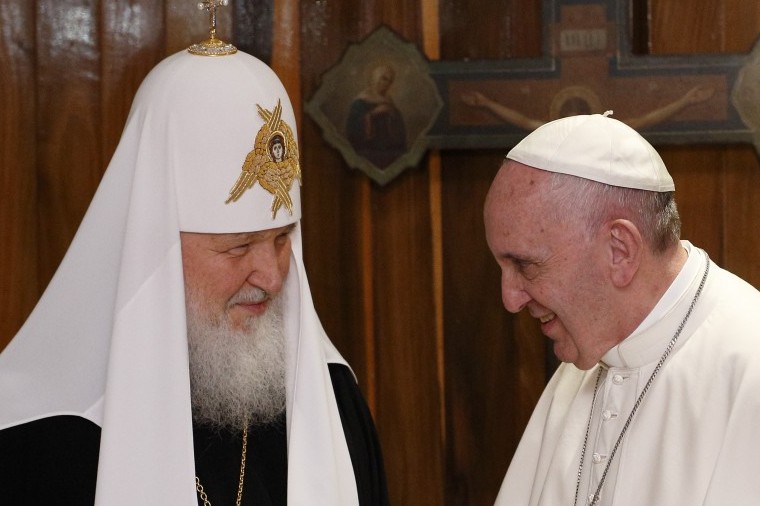 Amid the clicking of cameras and multiple flashes, Patriarch Kirill was overheard telling the pope, “Things are easier now.”

“It is clearer that this is God’s will,” Pope Francis told him.

A flight of almost 12 hours capped months of intense negotiations and more than two decades of Vatican overtures to bring a pope and a Russian patriarch together for the first time.

Addressing the situation in the Middle East and North Africa, they said in a joint declaration that “whole families, villages and cities of our brothers and sisters in Christ are being completely exterminated.”

Cuban President Raul Castro played host to the pope and patriarch, who was on a visit to Russian Orthodox communities on the island-nation. Pope Francis had a pastoral visit to Mexico planned for months; the stop in Havana was announced only a week before the meeting.

Pope Francis and Patriarch Kirill signed a joint declaration that emphasized the things the two churches have in common.

Addressing the situation in the Middle East and North Africa, they said that “whole families, villages and cities of our brothers and sisters in Christ are being completely exterminated.” They called on the international community “to act urgently in order to prevent the further expulsion” of Christians, to end violence and terrorism and to ensure that large amounts of humanitarian aid reach the victims of violence.

“In raising our voice in defense of persecuted Christians, we wish to express our compassion for the suffering experienced by the faithful of other religious traditions who have also become victims of civil war, chaos and terrorist violence,” they said.

“Attempts to justify criminal acts with religious slogans are altogether unacceptable,” they said. “No crime may be committed in God’s name.”

They called those who have died “martyrs of our times” and said they helped unite various churches “by their shared suffering.”

They spoke of the need to be vigilant against European integration that is “devoid of respect for religious identities.” They also spoke of extreme poverty, the “millions of migrants and refugees knocking on the doors of wealthy nations” and consumerism.

They spoke of life issues: abortion, euthanasia, new reproductive technologies and threats against the churches’ view of marriage.

After they signed the document, the two leaders embraced, and each spoke briefly.

Patriarch Kirill said they had a two-hour, “open discussion with full awareness of the responsibility we have for our people, for the future of Christianity, and for the future of human civilization itself. It was a conversation filled with content that gave us the opportunity to understand and hear the position of the other. And the results of the conversation allow me to assure that currently both churches can cooperate together to defend Christians around the world; with full responsibility to work together so that there may be no war; so that human life can be respected in the entire world; so that the foundations of human, family and social morality may be strengthened through the participation of the church in the life of human modern society.”

Pope Francis said: “We spoke as brothers, we share the same baptism, we are bishops, we spoke about our churches. We agreed that unity is done walking (together). We spoke clearly without mincing words. I confess that I felt the consolation of the Spirit in this dialogue. I am grateful for the humility of His Holiness, his fraternal humility and his good wishes for unity. We left with a series of initiatives that I believe are viable and can be done. ”

He thanked Patriarch Kirill and others involved in arranging the meeting and also thanked Cuba, “the great Cuban people and their president here present. I am grateful for his active availability; if it continues this way, Cuba will be the ‘capital of unity.'”

Patriarch Kirill gave Pope Francis a small copy of an icon of Our Lady of Kazan, which itself is a symbol of Vatican-Russian Orthodox detente, but also of failed hopes. The oldest known copy of the icon, an ornate 18th-century piece had been hanging in St. John Paul II’s study for a decade as he hoped to return it to Russia personally. Instead, in 2004, he had Cardinal Walter Kasper take it back to its country of origin as a gesture of goodwill.

The icon is one of the most revered and replicated icons in Russian Orthodoxy.

Pope Francis gave Patriarch Kirill a reliquary with a relic of St. Cyril, the patriarch’s patron saint, and a chalice, which not only is a sign of hopes for full communion between the two churches, but also a sign that the Catholic Church recognizes the validity of the Orthodox sacraments.

The addition of a stopover in Cuba was widely seen as a sign of Pope Francis’ willingness to go the extra mile to reach out a hand in friendship. At the same time, observers said, it gave those Russian Orthodox opposed to ecumenism a sense that their church is special and that it bowed to no one in agreeing to the meeting.

In a commentary distributed Feb. 11, Ukrainian Catholic Bishop Borys Gudziak of Paris said: “The pope is demonstrating humility; he is going to the territory of the other. In the eyes of nostalgic Russians, Cuba is almost home territory, a last outpost of a lost Soviet Empire.”

The Moscow Patriarchate had said that while those problems still exist with the Catholic communities, they take a backseat to the urgency of defending together the rights and very existence of persecuted Christians in the Middle East.

The harsh persecution of Christians and other minorities in Syria, Iraq and other parts of the region has been a cause Pope Francis has pleaded before world leaders and for which he has rallied the prayers of Christians across the globe.

He speaks often of the “ecumenism of blood,” the fact that Christians are killed for believing in Christ with the persecutors not knowing or caring what denomination or church they belong to. Christians are fully united in that suffering and, the pope has said, those who die for their faith are in full communion with each other and with centuries of martyrs now in the presence of God.

But the fate of persecuted Christians was not the pope’s primary motive for meeting Patriarch Kirill. Simply meeting him was the point.

Metropolitan Hilarion Volokolamsk, head of the Moscow Patriarchate’s external affairs department, told reporters a week earlier that Patriarch Kirill chose Havana in the “New World” because Europe, the “Old World,” was the birthplace of Christian division.

Ukrainians, Catholic or not, have expressed concerns about Pope Francis’ meeting with Patriarch Kirill given the patriarch’s apparently close ties to Russian President Vladimir Putin at a time of ongoing fighting in Eastern Ukraine.

“The topics of discussion will not be explicitly political ones,” Bishop Gudziak wrote. “The gist of the rendezvous will be the encounter of church leaders representing very different experiences, agendas, styles and spiritualities of ecclesial leadership. One can hardly expect revolutionary results. Yet, it is through encounter that spiritual change occurs. Let us pray for good spiritual fruit.”

Contributing to this story was Junno Arocho in Mexico City.

NEXT: Pope makes long-awaited visit to Our Lady of Guadalupe in Mexico