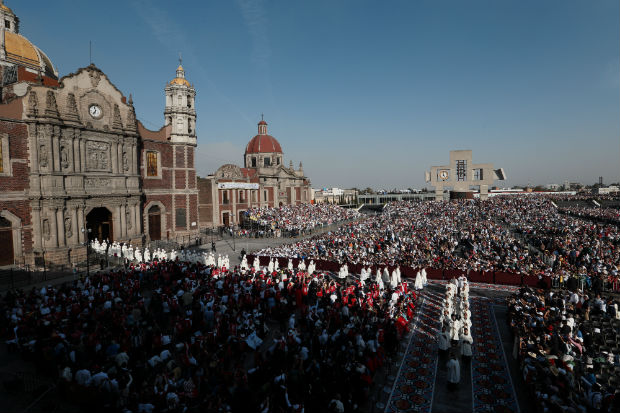 Bishops process from the historic Basilica of Our Lady of Guadalupe to the modern basilica for a Mass celebrated by Pope Francis in Mexico City Feb. 13. (CNS photo/Paul Haring) 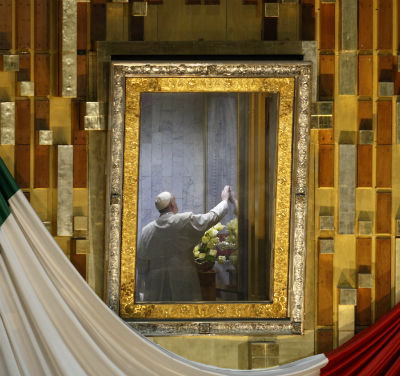 MEXICO CITY (CNS) — Pope Francis fulfilled his much-desired wish to pray in silence before the miraculous image of Our Lady of Guadalupe.

After celebrating the first Mass of his papal trip to Mexico Feb. 13, the pope made his way to the “camarin” (“little room”) behind the main altar of the basilica dedicated to Mary. The miraculous mantle, which normally faces the congregation, can be turned around to allow a closer and more private moment of veneration.

Laying a bouquet of yellow roses in front of the image, the pope sat down in prayerful silence with eyes closed and head bowed. After roughly 20 minutes, the pope stood up, laid his hand on the image and departed from the small room.

About 12,000 people packed the basilica for the papal Mass and another 30,000 were watching on screens set up in the outer courtyard. Built in 1976, the Basilica of Our Lady of Guadalupe is located near Tepeyac hill, the site of Mary’s apparitions to St. Juan Diego in 1531. With some 12 million people visiting each year, it is Catholicism’s most popular Marian shrine.

In his homily, the pope reflected on the Gospel reading, which recalled Mary’s visit to her cousin Elizabeth. Mary’s humility in saying “yes” to God’s will, he said, is a response “which prompted her to give the best of herself, going forth to meet others.” 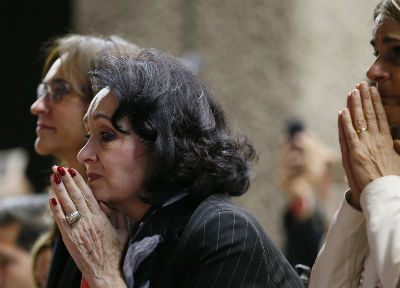 That very humility also led her to appear to a poor indigenous man, he said. “Just as she made herself present to little Juan, so too she continues to reveal herself to all of us, especially to those who feel — like him — ‘worthless,'” the pope said.

Recalling the miraculous appearance of Mary’s image, Pope Francis noted that through such a miracle, “Juan experienced in his own life what hope is, what the mercy of God is.”

The pope said that despite the indigenous saint’s feelings of inadequacy, Mary chose him to “oversee, care for, protect and promote the building of this shrine.”

“In this way, she managed to awaken something he did not know how to express, a veritable banner of love and justice: no one could be left out in the building of that other shrine: the shrine of life, the shrine of our communities, our societies and our cultures,” he said.

God’s true shrine, he added, is the life of his children, especially young people without a future, the elderly who are often unacknowledged and forgotten and families lacking even the most basic necessities.

“The shrine of God is the faces of the many people we encounter each day,” the pope said.

Pope Francis said that those who suffer do not weep in vain and their sufferings are a silent prayer that rises to heaven, “always finding a place in Mary’s mantle.”

Like St. Juan Diego, Christians are called to be Mary’s ambassadors and console those who are overwhelmed by trials and sufferings, he said.

“‘Am I not your mother? Am I not here with you?’ Mary says this to us again. Go and build my shrine, help me to lift up the lives of my sons and daughters, your brothers and sisters,” the pope said.

PREVIOUS: A brotherly embrace brings pope and Russian patriarch together

NEXT: Pope Francis tells Mexican bishops to speak out on tough issues