Being human: Pope Francis delights many, frustrates some 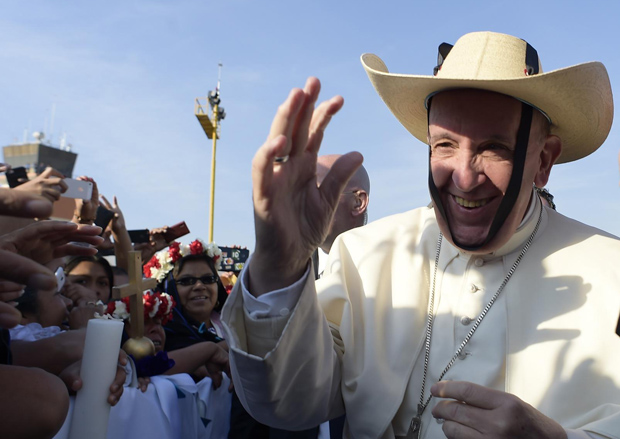 Pope Francis greets the crowd while wearing a hat before celebrating Mass with priests and religious at a stadium in Morelia, Mexico, Feb. 16. (CNS photo/L'Osservatore Romano via EPA)

VATICAN CITY (CNS) — The pope is human. Pope Francis demonstrated that in Mexico, as he does wherever he goes, and most people find it attractive. Most of the time.

In Pope Francis, Catholics can see a real person trying to live his faith in a complicated world. Sometimes he waves at them and they can see the frayed edges of his soutane sleeve. When his sciatica is acting up, he needs extra help going down steps. His aides do not keep his reading glasses, so sometimes he fumbles with the soutane pocket trying to get them out.

Crowds “ahhh” when he tenderly strokes the face of an obviously sick person, and they applaud when he gives a big hug to a child. However, they can be shocked when the human side of the pope is impatience or downright anger like it was Feb. 16 in Morelia, Mexico, when one of the thousands of people who grab the pope at public events yanked him, pulling him on top of a person seated in a wheelchair.

“What’s the matter with you?” the pope snapped. “Don’t be selfish!”

While security officers helped the pope back up, Pope Francis caressed the face of the boy he’d fallen on.

The off-the-cuff Pope Francis is very human, too. That touches people who experience a pope really listening to them and who is taking notes as people ask him questions. It sometimes frustrates journalists who are given his prepared remarks in advance, knowing full well that he may use little or none of the printed text. For people who do not usually agree with Pope Francis, the ad-libbing is just a nightmare. And, those spontaneous remarks can be frustratingly incomplete or imprecise.

But the pope knows that. For example, when he speaks about the growing gap between the rich and poor, he openly approximates. “If I’m not mistaken — the figures are approximate — but more or less 80 percent of human wealth is in the hands of less than 20 percent of the population,” he said Feb. 10 at his weekly general audience at the Vatican.

When people call Pope Francis “the pope of surprises,” they usually say it with a delighted sense of expectation. But there are people in the world who really don’t like surprises.

As far back as the papal trips of St. John Paul II, journalists have valued being on the papal plane because it is the only time they are guaranteed a chance to ask the pope questions. Popes do not hold regular news conferences. With Pope Francis, unlike with Pope Benedict XVI, the questions are not submitted in advance, and his answers almost always make the news.

Flying back from Mexico Feb. 17, Pope Francis was asked to react to Donald Trump’s accusations that the pope is political and, since the pope had just celebrated Mass at the Mexican-U.S. border, he also was asked to comment on Trump’s proposal to build a wall along the entire length of the border and deport millions of immigrants. Pope Francis answered, “If he says these things, this man is not Christian.”

The pope was less clear in responding to a question about whether “avoiding pregnancy” could be considered a “lesser evil” when facing the possibility of birth defects from the Zika virus. The pope used the word “contraception” when referring to Blessed Paul VI allowing women religious in the Belgian Congo in the 1960s to take the pill to avoid becoming pregnant if they were the victim of rape, which was being used as a weapon of war.

Then, answering the question about Zika, he said, “Avoiding pregnancy is not an absolute evil. In certain cases, such as the one I mentioned of Blessed Paul VI, it was clear.” The answer led to headlines saying the pope said it was possible that using birth control in response to Zika could be tolerated.

The pope’s responses to journalists, particularly, to the Trump question and to the Zika question made a splash in the news and on social media.

Thomas Peters, who tweets as @AmericanPapist, tweeted, “For the 1 millionth time, no more in-flight papal news conferences please!” And a bit later, he added, “Seriously, who believes that off-the-cuff interviews at 30,000 feet after a weeklong international trip is a good idea anymore?”

Pope Francis’ answer to another question, one that did not make the news, also illustrates his human side. He was asked what he was praying for during the 20 minutes he sat before the image of Our Lady of Guadalupe in Mexico City.

But he would not say more or give more details. “The things a child tells his mother are kind of secret,” he explained.

NEXT: Irish bishops urge Catholics to press candidates on abortion