In Zika outbreak, contraceptives may be ‘lesser evil,’ pope says 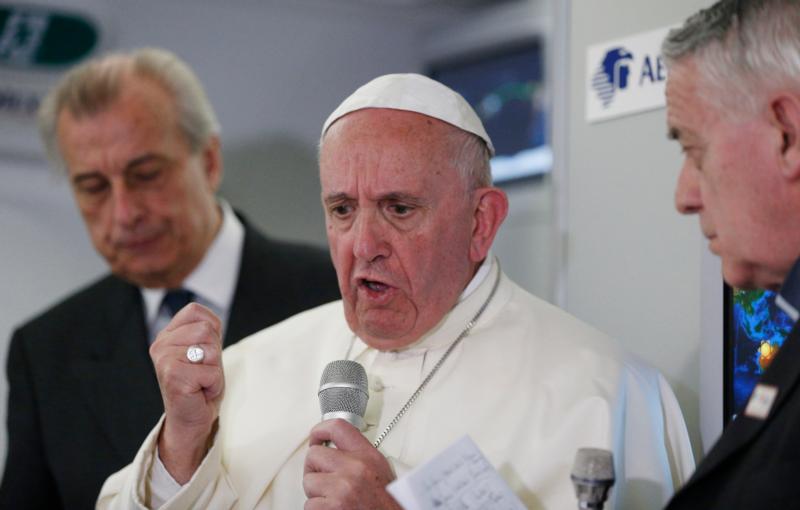 ABOARD THE PAPAL FLIGHT FROM MEXICO (CNS) — With physicians across Central and South American urging women to postpone pregnancy because of the Zika virus that causes birth defects, Pope Francis said using contraceptives could be a “lesser evil.”

Holding a news conference Feb. 17 on his way back to Rome after a six-day visit to Cuba and Mexico, the pope was asked if the use of artificial contraceptives or abortion could be considered “a lesser evil” when the baby had a high risk of birth defects.

“Abortion is not a lesser evil — it’s a crime,” Pope Francis said. It is the deliberate taking of an innocent human life. “It’s an absolute evil.”

The concept of a “lesser evil” may apply to artificial birth control, however, he said, pointing to Blessed Paul VI’s consent in the early 1960s for women religious in the then-Belgian Congo to take the pill when rape was being used as a weapon of war.

Unlike abortion, he said, “avoiding pregnancy is not an absolute evil. In certain cases, such as the one I mentioned of Blessed Paul VI, it was clear.”

At the same time, Pope Francis pleaded with doctors and scientists “to do their utmost to find vaccines against these mosquitoes that carry this disease.”

Jesuit Father Federico Lombardi, speaking to Vatican Radio about the pope’s remarks, said Pope Francis distinguished between abortion and “the possibility of a recourse to contraception or condoms in cases of emergency or in special situations, which does not involve the suppression of a human life, but avoiding a pregnancy.”

“He does not say this recourse can be accepted and used without any discernment, but in fact clearly said that it can be taken into consideration in cases of particular emergency,” Father Lombardi said.

Pope Francis’ reference to the situation in Belgian Congo illustrates how he was not referring to using contraceptives in “a normal situation,” but only in situations of serious danger, the spokesman said.

Pope Benedict XVI made similar comments in his book-interview “Light of the World,” where “he spoke about the use of condoms in situations where there is a risk of contagion, for example, with AIDS,” Father Lombardi said.

Pope Francis said that “contraceptives or condoms, in cases of particular emergency and gravity, can be the object of a serious discernment of conscience,” Father Lombardi said, “while on abortion, he did not allow any room for consideration.”

Health officials have urged women to postpone their pregnancies for two years, because the Zika virus has been linked to microcephaly, a rare neurological condition that causes smaller heads in newborns, affecting the normal development of their brain.

In general, the Catholic Church is opposed to artificial birth control, but promotes natural family planning to space births.

NEXT: Being human: Pope Francis delights many, frustrates some