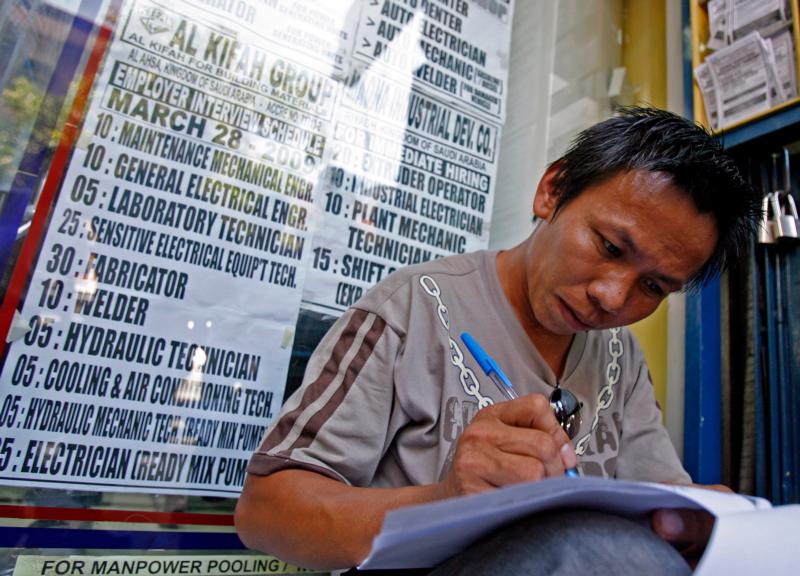 In this 2009 file photo, a Filipino jobseeker fills out forms outside a recruitment agency in Manila for jobs in the Middle East. Bishops there are preparing ways to support Filipinos working in the Middle East who might be affected by falling oil prices in the region. (CNS photo/Alanah Torralba, EPA)

MANILA, Philippines (CNS) — The country’s Catholic bishops are preparing ways to support Filipinos working in the Middle East who might be affected by falling oil prices in the region.

The bishops said they would intensify their pastoral programs for overseas Filipino workers, “reaching out to them through chaplains and to their families through the parishes,” said Bishop Ruperto Santos of Balanga, chairman of the bishops’ Commission on the Pastoral Care of Migrants and Itinerant People. His remarks were reported by ucanews.com.

The bishop said the church is ready to provide seminars and transition counseling to the workers.

Bishop Santos said news that Filipino workers in the Middle East are in danger of losing their jobs is “very alarming,” because it would also affect the families left behind in the country.

“A widespread retrenchment (of workers) will definitely affect adversely their dependents here,” he said, adding that thousands of Filipinos are working in the Middle East.

Ucanews.com reported that in a statement Feb. 14, Bishop Santos urged the Philippine government to prepare a contingency plan and coordinate with host countries so that accurate data can be obtained on the conditions of Filipino workers.

“This is a problem not only of the workers but of the entire country,” he said.

In early February, the Philippine government assured people that the country has enough funds for repatriation and other forms of assistance for Filipino workers who may be affected by plunging crude oil prices.

Rebecca Calzado of the Overseas Workers Welfare Administration said “possible assistance” is being planned for displaced workers who will stay abroad after losing their jobs.

Government data show that during the first 11 months of 2015, the Middle East remained the second-biggest source of remittances on a per-region basis for the Philippines.

On a per-country basis, the United States has the most Filipinos sending remittances, followed by Saudi Arabia.

The Central Bank of the Philippines has said that it expects a temporary slowdown in remittances from Filipino workers in Saudi Arabia and Iran amid the tension between the two Middle Eastern countries.