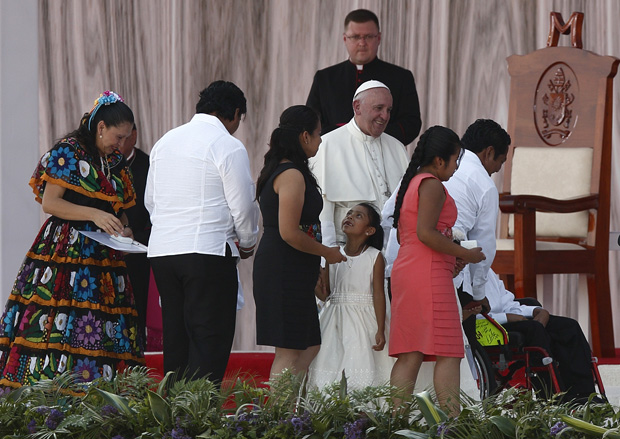 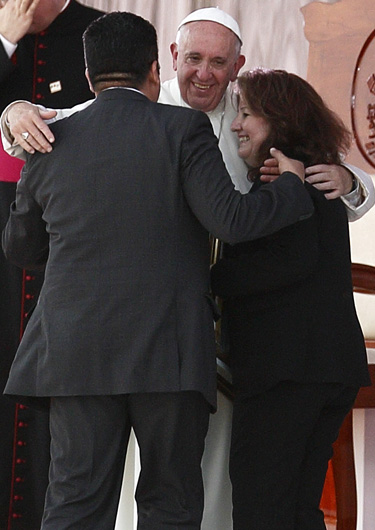 Pope Francis embraces Humberto and Claudia Gomez, who are married civilly but not in the church, during a meeting with families at the Victor Manuel Reyna Stadium in Tuxtla Gutierrez, Mexico, Feb. 15. (CNS photo/Paul Haring)

Speaking under a scorching-hot sun as dozens were treated for heat stroke, the pope said family life was not always easy and often was a struggle, but he pleaded for perseverance, saying family life was one of the solutions to increasing isolation and uncertainty and its unintended consequences.

“I prefer a wounded family that makes daily efforts to put love into play to a society that is sick from isolationism and is habitually afraid of love,” Pope Francis said Feb. 15 in front of a boisterous audience of families, who came from across southern Mexican and nearby Guatemala for a celebration in the city of Tuxtla Gutierrez. “I prefer a family that makes repeated efforts to begin again to a society that is narcissistic and obsessed with luxury and comfort. I prefer a family with tired faces from generous giving to faces with makeup that know nothing of tenderness and compassion.”

The pope’s focus on families turned the focus of his six-day visit toward the pastoral issues after hitting hard on matters such as corruption, crime and the country’s often impoverished and exploited indigenous populations.

During the event, a couple from the city of Monterrey — one of whom was divorced — spoke of the stigma and sense of not belonging by not being able to receive Communion, but finding a home in the Catholic Church by serving others and organizing pastoral projects.

“As we came close to our church, we received loved and compassion,” said Humberto and Claudia Gomez, who are married civilly, but not in the church. “It’s marvelous to have a marriage and family in which God is at the center.”

Another speaker, single mother Beatriz Munoz Hernandez, 52, spoke of a childhood marked by “poverty, violence and abandonment” by her father, then of becoming pregnant as a teenager.

“I found the love of God through his church and he rescued me, announced that he loved me, that he didn’t reject me and, above all, that he forgave me,” said Munoz, adding her faith helped in overcoming the temptation of seeing abortion as a solution to several pregnancies.

Family is often seen as a social safety net in Mexico and a pillar in a low-trust society, though state statistics show people are marrying less, divorcing more and increasingly living in nontraditional families.

Pope Francis cracked jokes throughout his speech and strayed from his prepared text. He mentioned a couple married for 50 years and asked “who was the most patient.” The answer was obvious for the pope: “Both of them.”

Departing from prepared remarks, he offered advice for creating happy families and keeping the peace in times of turbulence.

“Do not end the day without making peace,” Pope Francis said. “If you end the day in war, you will end up in cold war, and a cold war is very dangerous in the family, because it will undermine families from underneath.”

Pope Francis focused most on overcoming isolation and uncertainty and its insidious effects.

“Uncertainty is not only a threat to our stomach (which is already serious), but it can also threaten our soul, demoralizing us and taking away our energy, so that we seek apparent solutions that, in the end solve nothing,” he said. “There is a kind of uncertainty which can be very dangerous, which can creep in surreptitiously; it is the uncertainty born of solitude and isolation.”

He cited the example of Humberto and Claudia and their service to others as a solution. Another solution, he said, was with smart public policy, “which protects and guarantees the bare necessities of life so that every home and every person can develop through education and dignified employment.”

“Laws and personal commitment,” the pope said, “are a good pairing to break the spiral of uncertainty.”

Family is often seen as a social safety net in Mexico and a pillar in a low-trust society, though state statistics show people are marrying less, divorcing more and increasingly living in nontraditional families. 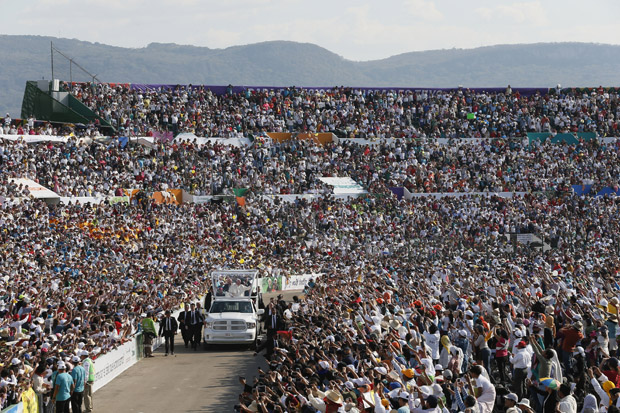