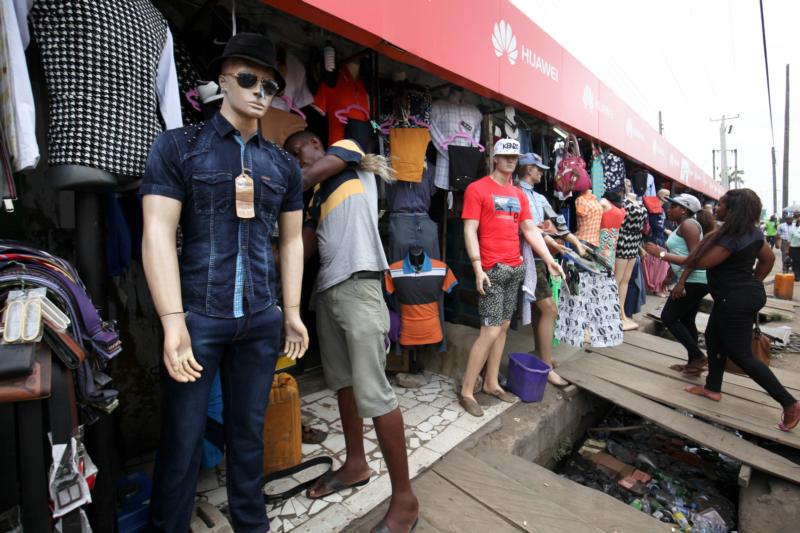 In this Feb. 17, 2015, file photo, shoppers in Lagos, Nigeria, check clothes at a busy shopping center. Nigeria's Catholic bishops called on the government to become less dependent on crude oil as the driver of the country's economy and to strengthen investments in grass-roots businesses to reduce glaring financial inequality. (CNS photo/Ahmed Jallanzo, EPA)

LAGOS, Nigeria (CNS) — Nigeria’s Catholic bishops called on the government to become less dependent on crude oil as the driver of the country’s economy and to strengthen investments in grass-roots businesses to reduce glaring financial inequality.

Such investments would end up strengthening local enterprises, allowing more people to access the basic necessities of life, the Catholic Bishops’ Conference of Nigeria said Feb. 19 at the end of its weeklong meeting in Abuja.

“The poor who have equal rights to benefit from the wealth of the country have continued to experience lack of basic human needs,” the bishops said in calling for policies that support small- and medium-size businesses.

Nigeria’s economy has weakened because of reduced revenues as world oil prices have tumbled over the past two years. The sliding value of the Nigerian naira, the country’s currency, has decreased the buying power of average Nigerians.

The bishops also called on public officials to ensure that resources meant for national development and the common good of all Nigerians are used accordingly.

They expressed concern that cultural conflicts and rising crime are hurting the country.

“We all have a responsibility to ensure that no member of the society suffers violence, marginalization and deprivation,” the bishops said.

“We call on individuals, communities and groups to be more vigilant and be proactively involved in ending these crises.”

At the same time, the bishops commended the government’s renewed push against the Boko Haram insurgency in the northeastern part of the country. Bombings and violent attacks by the insurgents since 2009 have claimed thousands of lives and have caused people to relocate to treacherous camps.

“We encourage the government and security agencies to do all they can to defeat insurgents and prevent further loss of lives,” the bishops said in calling on the government to seek alternative strategies to overcome the insurgents.

The government also must take steps to help victims of the insurgency to rebuild their properties and to engage local leaders and religious communities in its campaign to quash the rebels.

In addition, the bishops lauded the government for fighting corruption. Their statement said the government must take every step necessary to investigate past illegal activity, transparently prosecute those found to have committed wrong and hold the guilty accountable in accordance with Nigerian laws.

Nigeria needed reconciliation, mercy and peace to end tribal, regional and religious sentiments that had held its citizens in bondage for decades, the bishops said.

“We urge Nigerians to work in solidarity to correct the imbalances in resource and power-sharing,” the bishops added. “Proper social security and good governance will engender functional education, employment, health care, social justice and development, and thus curb corruption, violence and poverty.”

NEXT: Ministry in Aleppo is about keeping hope alive, priests say