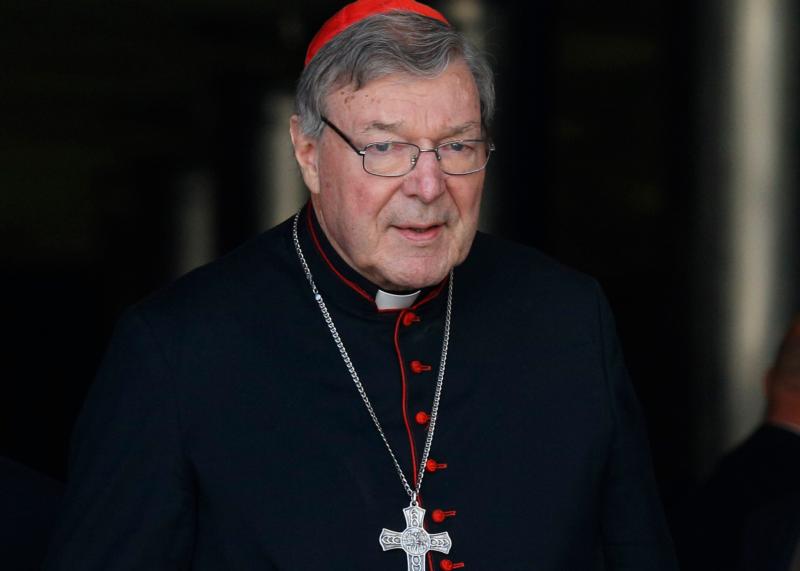 Australian Cardinal George Pell is seen in this Oct. 6, 2014 file photo at the Vatican. The Australian cardinal called for an inquiry into the leaking of accusations that he is under police investigation for the alleged abuse of minors. (CNS photo/Paul Haring)

VATICAN CITY (CNS) — Australian Cardinal George Pell called for an inquiry into the leaking of accusations that he is under police investigation for the alleged abuse of minors.

Calling the accusations “without foundation and utterly false,” the cardinal “strongly denies any wrongdoing. If the police wish to question him, he will cooperate, as he has with each and every public inquiry,” said a statement from the cardinal’s office in Rome Feb. 19.

“The cardinal understands that several media outlets have received confidential information leaked by someone within the Victorian police,” the government law enforcement agency in the Australian state of Victoria, the statement said.

“Given the serious nature of this conduct, the cardinal has called for a public inquiry to be conducted in relation to the actions of those elements of the Victorian police who are undermining the Royal Commission’s work,” it said. The Royal Commission Into Institutional Responses to Child Sexual Abuse is a government inquiry into church, state and other institutions’ response to the sexual abuse of children.

The cardinal also called on the state prime minister and police minister “to immediately investigate the leaking of these baseless allegations,” the statement said.

Victoria’s The Herald Sun reported late Feb. 18 that “legal sources” told reporters more than a dozen special task force detectives have been investigating past claims that the cardinal abused between five and 10 boys when he was a priest in Ballarat and archbishop of Melbourne.

The Sano Task Force, which was established to look into allegations stemming from the Royal Commission’s work, presented its evidence to the Victoria police, the newspaper reported. It said the task force is also investigating allegations the cardinal — then a seminarian — abused an altar boy in 1961. Former Judge Alec Southwell, appointed by the Australian bishops’ conference to investigate the case, dismissed those charges in 2002.

Cardinal Pell, who has been working at the Vatican since 2014 as head of the Secretariat for the Economy, was scheduled to give evidence Feb. 29 to the Royal Commission concerning the Archdiocese of Melbourne’s response to abuse allegations and a case study involving the response of church authorities in Ballarat.

The commission accepted the cardinal’s offer to give evidence via video link after his doctor advised him against taking the long flight to Australia. He has already appeared before the Royal Commission twice and appeared before the Victorian Parliamentary Inquiry into the Handling of Child Abuse by Religious and other Organizations.

The Feb. 19 statement from the cardinal’s office in Rome said, “The timing of these leaks is clearly designed to do maximum damage to the cardinal and the Catholic Church and undermines the work of the Royal Commission.”

“It is outrageous that these allegations have been brought to the cardinal’s attention through a media leak,” it said.

The statement refers to evidence given to the commission that police superiors in the 1950s through 1970s intentionally refused to take action against or charge clerics suspected of abuse.

The statement called it “outrageous” that people within the police publicly attacked him through the leaks when he is “a witness in the same case study that has exposed serious police inaction and wrongdoing.”

While Victoria’s police had not taken steps to pursue “the false allegations” after he was cleared of them in 2002, “the cardinal certainly has no objection to them reviewing the materials that led Justice Southwell to exonerate him. The cardinal is certain that the police will quickly reach the conclusion that the allegations are false.”

NEXT: Pope calls for moratorium on death penalty