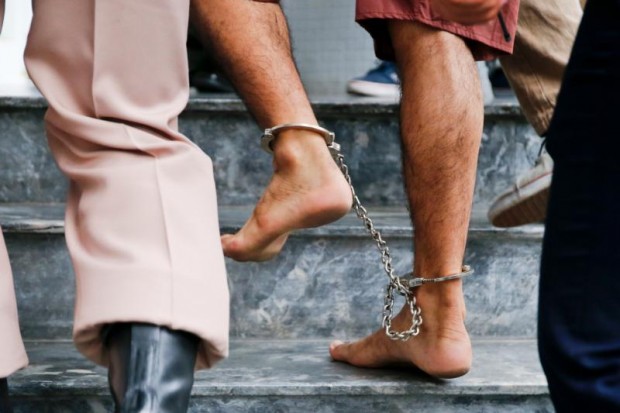 The shackled feet of a bombing suspect in Bangkok, Thailand, are seen as he is escorted by officers and prison personnel to Military Court Feb. 16. Pope Francis asks world leaders for a Jubilee Year moratorium on the death penalty. (CNS photo/Diego Azubel, EPA)

VATICAN CITY (CNS) — Pope Francis called for a moratorium on executions during the Year of Mercy and said the fifth commandment, “Thou shalt not kill,” applies not only to the innocent but to the guilty as well.

“Even a criminal has the inviolable right to life, a gift of God,” he said Feb. 21 after reciting the Angelus with visitors gathered in St. Peter’s Square.

Marking the beginning of an international conference “For a world without the death penalty,” sponsored by the Community of Sant’Egidio, the pope expressed hope that it will strengthen efforts to abolish the death penalty.

Increasing opposition worldwide to the death penalty as “an instrument of legitimate social defense” is “a sign of hope,” he said.

“This issue has to be considered within the perspective of a penal justice, which is more and more in compliance with human dignity and God’s plan for humanity and society,” the pope said.

The pope appealed to world leaders to reach an international consensus on the abolition of the death penalty. He also proposed Catholic government leaders “make a courageous and exemplary gesture by seeking a moratorium on executions during this Holy Year of Mercy.”

“All Christians and people of goodwill are called today to work not only for the abolition of the death penalty, but also to improve the conditions of life in prison, in the respect of human dignity of people deprived of freedom,” he said.

In his remarks before reciting the Angelus prayer, the pope recalled his Feb. 12-17 visit to Mexico, calling it an “experience of transfiguration.”

“The Lord has shown us the light of his glory through the body of the church, of his holy people that lives in this land — a body so often wounded, a people so often oppressed, despised, violated in its dignity. The various encounters we experienced in Mexico were truly full of light: the light of a faith that transfigures faces and enlightens our path,” he said.

The main goal of his trip, he added, was his visit to the Basilica of Our Lady of Guadalupe to pray before the miraculous image of Mary.

“I contemplated and I allowed myself to be gazed upon by she who carries imprinted in her eyes the gaze of all of her children, gathering up the sorrows caused by violence, kidnapping, assassinations, the violence against so many poor people, against so many women,” he said.

Pope Francis also gave thanks to God for his meeting with Russian Orthodox Patriarch Kirill of Moscow, calling it “a prophetic light of the Resurrection which the world today needs more than ever.”

“May the holy mother of God continue to guide us on the path of unity,” the pope said.

Before concluding his address, the pope prescribed some “spiritual medicine” to the faithful for the Lenten season: the rosary.

Volunteers, including some poor, homeless and refugees along with religious, distributed small white boxes with an anatomical drawing of the human heart that contained a rosary along with the Divine Mercy image of Jesus.

“Receive this gift as a spiritual help to spread love, forgiveness and brotherhood, especially during this Year of Mercy,” the pope said.

PREVIOUS: Cardinal Pell calls for inquiry into press leaks accusing him of abuse