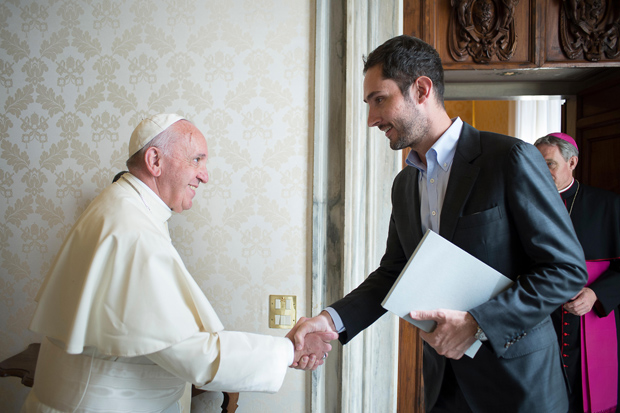 Don’t allow the market to be “an absolute, but honor the requirements of justice,” he said in an audience at the Vatican Feb. 27 with representatives of Confindustria — a federation of employers and the chamber of commerce in Italy.

The pope said the business leaders were called to safeguard professional standards, workplace safety and always promote justice, refusing “the shortcuts of nepotism and cronyism,” dishonesty and “easy compromises.”

Their mission should be guided by altruism, he said, and they categorically should reject letting human dignity be “trampled in the name of production requirements that mask individualistic short-sightedness, sad selfishness and the thirst for earnings.”

Let promoting the common good be what guides production “so that an economy by all and for all may grow,” the pope told the representatives.

A more inclusive economy is possible, he said, “provided that the simple proclamation of economic freedom not prevail over the concrete freedom of the person and his or her rights, that the market not be an absolute, but honor the requirements of justice, and ultimately, the dignity of the person. Because there is no liberty without justice and there is no justice without the respect of each person’s dignity.”

The pope asked that special attention be paid to the real needs and dreams of families and young adults as well as older people who may still have the willingness and know-how to contribute to businesses.

For example, he said, concrete focus on families means liberating “mothers and fathers of families from the anguish of not being able to provide a future, much less a present to their own children; it means knowing how to lead and also how to listen,” sharing ideas and using work to create new jobs.