Giving to the poor is part of Year of Mercy, pope says 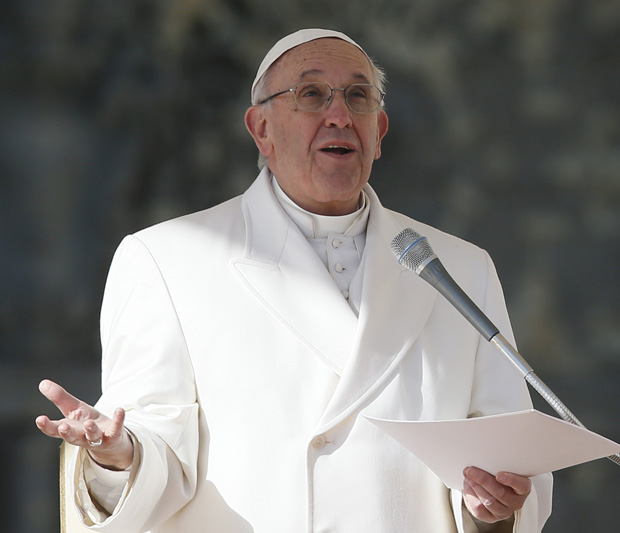 VATICAN CITY (CNS) — A jubilee year that does not open people’s wallets to share what they have with others is not a true jubilee, Pope Francis said.

“This pope isn’t inventing that,” he insisted. “It’s in the Bible.”

At his weekly general audience Feb. 10 in St. Peter’s Square, Pope Francis spoke about the description of a jubilee year in the Book of Leviticus. The religious feast also had serious social implications, he said, because it proclaimed a forgiveness of debts, the freedom of indentured servants and special generosity toward the poor and the stranger.

“It was a kind of ‘general amnesty,’ which permitted everyone to return to their original situation with the cancellation of every debt, the restitution of land and the possibility of enjoying once again the freedom proper to members of the people of God,” he said.

For God’s chosen people, who are called to holiness, the pope said, the jubilee prescriptions help “to combat poverty and inequality, guaranteeing a dignified life for all and a fair distribution of the land on which to live and draw sustenance.”

During the Catholic Church’s jubilee year, each Christian should think about what they have, he said, and “if they have too many things,” they should “give some to someone who has nothing; 10 percent or 50 percent. The Holy Spirit will inspire you.”

“The Lord blesses he who opens his hand with generosity,” the pope added. “He will give you twice as much back, perhaps not in money, but in other things.”

Pope Francis told the crowd gathered in St. Peter’s Square that “a jubilee is for conversion so that our hearts become bigger, more generous, more (like) a child of God, with more love.”

“I’ll tell you something,” he said, “if this jubilee doesn’t reach our pockets, it’s not a real jubilee. Do you understand? This is in the Bible, eh, this pope isn’t inventing that. It’s in the Bible.”

“The biblical message is very clear: courageously open yourselves to sharing; this is mercy,” the pope said. “If we want mercy from God, let us begin by being merciful ourselves.”

A biblical jubilee is about sharing and solidarity, Pope Francis said. “The biblical jubilee was a ‘jubilee of mercy’ because it was lived with a sincere search of the good of one’s needy brothers and sisters.”

The laws governing God’s people in the Bible, he said, also had other means for encouraging people to help others experience God’s mercy. One of those things was the command to tithe a tenth of one’s earnings to the temple and to widows and orphans or to give a portion of the first fruits of one’s harvest.

In addition, he said, the Bible had harsh words for those who charged high interest rates when loaning to the poor. In many countries, he added, usury is still a huge problem and families lose everything and end up on the streets.

“Please, let us pray that in this jubilee the Lord would remove from all our hearts this desire to have more,” he said, adding that as stewards of the Lord, “no one should claim exclusive possession, creating situations of inequality.”