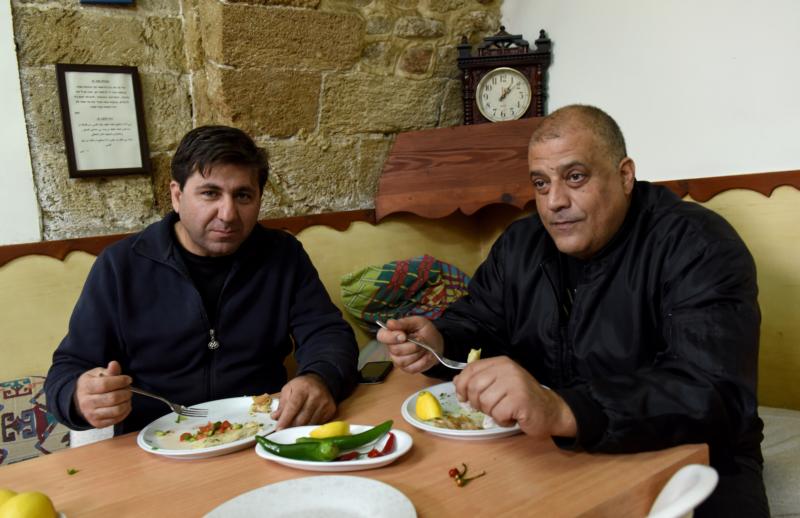 HAIFA, Israel (CNS) — Sultan Subouh, 32, has spent most of his life high on drugs, in detention homes or behind bars. But as he walked into the stone courtyard of the House of Grace after a full day’s work as a handyman, he said he was determined to turn around his life.

Subouh said although he began to work on being drug-free in prison, what really has helped him remain clean is his stay at the House of Grace, Israel’s only halfway house for newly released Arab prisoners. Whenever he feels nervous about his future or unsure about a situation, he returns to the house and is always received with open arms, he said.

“Only because of House of Grace have I been able to take care of myself and hold down a job,” said Subouh, who, after nine months at the house, recently moved to a transitional apartment. Every week he returns to meet with a social worker.

“If it weren’t for this place, I don’t think I would have ever found myself,” he told Catholic News Service. “This is the first time I find myself out in society and clean without drugs. I feel like I am creating something. I have returned to myself, I have returned to my family. I am not hurting myself or anybody else. I feel proud of myself. This house is just simply family. It is not a treatment facility. The Shehades are family. They are amazing supportive people.”

The House of Grace was founded by Kamil Shehade, a member of the local Melkite Catholic community, and his Swiss-born wife, Agnes, in 1982 on property that included an abandoned church donated to them by the Melkite bishop. They raised their family in the compound and, after Kamil Shehade’s death from cancer in 2000, Agnes Shedade continued with their work.

“My husband always said every person was the face of God,” she said.

Residents of the House of Grace stay at the home for nine months, living as members of the family.

Released prisoners have one-half of the house for their bedrooms and laundry room, while Agnes Shehade still lives in the family’s home in the other half, connected by a joint kitchen where meals are shared. The five Shehade children were raised in the house, eating meals and playing with the released prisoners. Fifteen staff members and three volunteers work at the house.

“Growing up this way, this is a way of life for us,” said Jamal Shehade, 33, director of House of Grace. He studied media and communication in Switzerland, even serving in the army there, but eventually returned to Haifa in 2008 to help his mother manage the house, because he felt something was missing from his life. “It’s not always easy; we didn’t have a private life. Our doors were always open, people were always here. But it never made us angry. We understood what kind of blessing it is to be a part of this work, putting all stigmas and prejudices aside and looking at people as part of the family, as human beings. My parents were always there (for us) and it was always a part of their faith.”

He recalled celebrating holidays of all three faiths with the former prisoners. He said growing up in such an atmosphere gave him a different view on life, one in which he looked at everyone with respect and searched for the things they had in common.

“As Christians we never imposed our faith on anyone, and it was important to us to live according to the New Testament and what Jesus told us, to be examples to others,” said Jamal Shehade, who is expecting his first child soon. He said he plans to bring the baby to the House of Grace, just as his siblings bring their children to visit with their grandmother. “I would like my children to be exposed to this, to show them there is another way of living, especially in these difficult days we are living here. In this egoistic world, I want to show them how to give and to share with others.”

Twins Thomas and Bernard Shehade, 30, also help operate the halfway house, which is financed mostly by private donations from Europe. They are now also working in cooperation with the Israeli Prisoner Rehabilitation Authority, which partially funds the treatment for released prisoners while they are at the House of Grace. The relationship has been rocky at times, though, because of financial disagreements.

Jamal Shehade said almost 45 percent of Israel’s 11,000 criminal prisoners are Arab, though they make up only 20 percent of the population.

Initially the House of Grace was open to both Jewish and Arab men and, until 1993, released women prisoners, but after the agreement with the Rehabilitation Authority in 2011, the home became exclusively for Arab men. The house accepts released prisoners who have committed a variety of crimes, except for sexual assaults.

“This place gives people the chance to return to a normative life, to see that there is life beyond (crime and prison), that they can be rehabilitated and also even contribute to society,” said volunteer Geris Deeb, 50.

Seeing the difference between when released prisoners arrive and when they leave “motivates me to continue with this mission,” said Jamal Shehade. “It is not a business where we get a lot of income from, but it is a personal feeling of having been able to change something, even if very slightly, in the life of others.”

NEXT: Pope sends off missionaries of mercy to help people open hearts to God