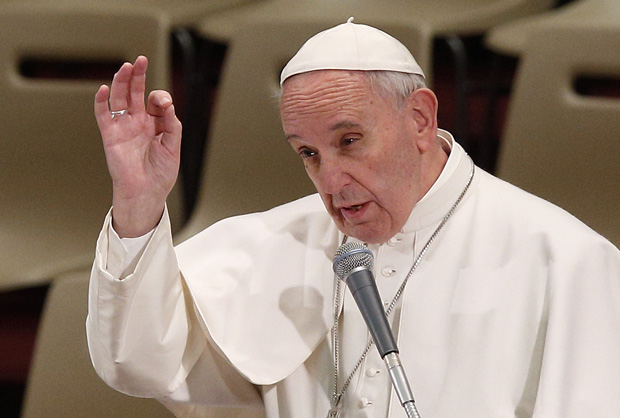 Pope Francis gestures as he speaks during an audience with religious at the Vatican Feb. 1. (CNS photo/Paul Haring)

Dialogue between China and the rest of the world, including the church, is necessary because it is the only way to achieve peace, he said.

“Dialogue does not mean that we end up with a compromise, half the cake for you and the other half for me.”

“No, dialogue means ‘Look, we have got to this point, I may or may not agree, but let us walk together.’ This is what it means to build,” he said in a lengthy interview with Asia Times.

The interview, published online in English Feb. 2, took place at the Vatican Jan. 28 with Francesco Sisci, a longtime Italian correspondent based in China and senior researcher at China’s Renmin University.

The pope also included “my best wishes and greetings to President Xi Jinping and to all the Chinese people” for Chinese New Year Feb. 8.

“I wish to express my hope that they never lose their historical awareness of being a great people, with a great history of wisdom, and that they have much to offer to the world,” the pope said.

In the hourlong interview, the pope said he has admired China ever since he was a boy and sees it as “a reference point of greatness,” as a country and culture “with inexhaustible wisdom.”

In fact, he said he became “very emotional, something that does not usually happen to me,” when he was told they were about to fly over Chinese airspace and send a papal greeting by telegram to Xi on the flight from Rome to South Korea in 2014.

He said Jesuit Father Matteo Ricci, the 16th-century missionary to China, showed the church that “it is necessary to enter into dialogue with China” because of its wealth of wisdom and history — as “a land blessed with many things.”

“The Catholic Church, one of whose duties is to respect all civilizations, before this civilization, I would say, has the duty to respect it with a capital ‘R.’ The church has great potential to receive culture,” the pope said.

However, when asked about the one-child policy that was introduced in China in 1980, the pope said the impact of that policy, especially on the single child who must care for many elderly relatives, was not “natural.”

“The problem for China of not having children must be very painful, because the pyramid is then inverted, and a child has to bear the burden of his father, mother, grandfather and grandmother. And this is exhausting, demanding, disorientating. It is not the natural way.”

China recently passed a two-child policy, and Sisci said families in China still face huge challenges by not having the traditional model of the family that existed before state-enforced population control programs.

When asked how families should face these challenges, especially during the Year of Mercy, the pope said the important thing was to not sink into the status quo but to understand the past and keep moving forward. Otherwise, he said, “if one gets tired and stops, one can become bitter and corrupt.”

“Looking at this past — and perhaps the fact of not having children creates a complex — it is healthy to take responsibility for one’s own path: ‘Well, we have taken this route, something here did not work at all, so now other possibilities are opened up.'”

Those who preferred not to have children “have to take responsibility for their own path,” he said, but in every case, look toward the future, “do not be bitter, but be at peace with your own path, even if you have made mistakes.”

It is only by becoming reconciled with one’s past and errors can one grow and mature, he said.

It’s also “healthy for a person to have mercy toward himself, not to be sadistic or masochistic. That is wrong. And I would say the same for a people; it is healthy for a population to be merciful toward itself,” he said.

When asked about how to face the challenges brought by China’s explosive economic growth such as environmental disasters and harm to families, the pope said facing reality and talking about it — not hiding from it — were the only ways to find possible solutions.

He said accepting reality is like what the goalkeeper must do in a soccer match — he “must catch the ball from wherever it comes. Reality must be accepted for what it is” without “disguising it, without refining it.”

The reality may not be pleasant — “I am against it, it makes me suffer, but if I don’t come to terms with it, I won’t be able to do anything. The second step is to work to improve reality and to change its direction,” he said.

Encounter with the rest of the world

Pope Francis said China should not be afraid of dialogue and encounter with the rest of the world, and vice versa.

“We must not fear challenges,” he said, because everyone can “find ways of coexisting, of respect and mutual admiration.”

“The Western world, the Eastern world and China all have the capacity to maintain the balance of peace and the strength to do so. We must find the way, always through dialogue,” he said.

“To dialogue does not mean that I surrender myself, because at times there is the danger, in the dialogue between different countries, of hidden agendas, namely, cultural colonization,” he said.

“It is necessary to recognize the greatness of the Chinese people, who have always maintained their culture. And their culture — I am not speaking about ideologies that there may have been in the past — their culture was not imposed.”

China’s concern about outside influence in internal affairs has meant it requires Catholic communities to register with the government-controlled Catholic Patriotic Association, which has ordained bishops without the approval of the pope. Chinese authorities have frequently arrested Catholics who reject government control.

The Vatican has not had diplomatic relations with China since shortly after the country’s 1949 communist revolution; however, both sides have regular contact.

NEXT: God wants to save you; will you let him? pope asks