God wants to save you; will you let him? pope asks 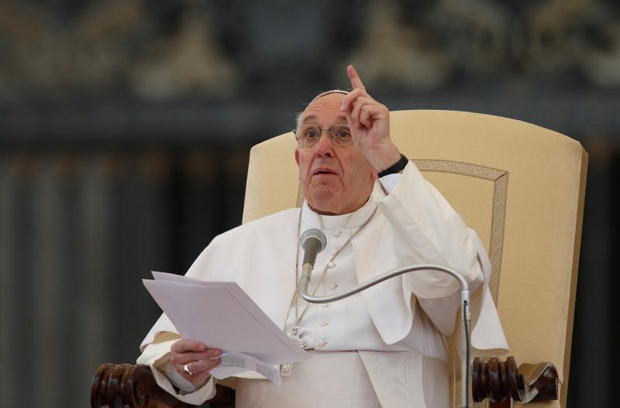 Pope Francis gestures as he speaks during his general audience in St. Peter's Square at the Vatican Feb. 3. (CNS photo/Paul Haring)

VATICAN CITY (CNS) — God doesn’t want to condemn anyone; he wants to save every person in the entire world, Pope Francis said.

“The problem is letting him enter one’s heart” to transform one’s life, the pope said during his weekly general audience in St. Peter’s Square Feb. 3.

“This is the heart of God, the heart of a father who loves his children and wants them to live rightly and justly and, therefore, to live in fullness and be happy,” he said.

The pope continued a series of talks dedicated to divine mercy, looking specifically at how divine mercy and divine justice go hand in hand.

“It might seem that they are two things that contradict each other,” he said, but they don’t because “it is precisely God’s mercy that brings true justice to fruition.”

God’s justice is different from the human administration of legal justice, which is “retributive, that imposes a penalty on the guilty,” the pope said.

“This path still does not lead to true justice because it doesn’t actually conquer evil but simply contains it,” the pope said. “Rather, it is only by responding to (evil) with the good that evil truly can be overcome.”

The Bible shows that true justice bypasses a court system, he said. The one who is wronged goes directly to the one who is guilty “in order to invite him to conversion, to help him to understand that he is doing wrong, to appeal to his conscience.”

Through this act of persuasion, the one guilty of wrongdoing “can open himself to the forgiveness that the injured party is offering him. And this is beautiful,” the pope said.

This is the way that families try to work out their conflicts, he said. The one who has been offended “loves the culprit and wants to salvage the relationship that binds them, not cut off this relationship,” he said.

But it is not an easy path to take, he added. “It requires that the person who was wronged be ready to forgive and desire the salvation of and what’s best for the one who has wronged him.”

These reciprocal acts of forgiveness and conversion are the only way true justice can triumph, the pope said, because “if the guilty one recognizes the evil committed and stops doing it, then the evil is no more and the one who was unjust becomes just.”

“This is how God acts with us sinners,” he said. God constantly offers forgiveness and helps people recognize their sin in order to set them free.

That is because “God doesn’t seek our condemnation, but our salvation. God doesn’t want to condemn anybody,” not even those whom many think deserve it like Pontius Pilate or Judas, he said. “The Lord of mercy wants to save everybody.”

God’s immense heart “goes beyond our small concept of justice” and opens up people’s horizons to his limitless mercy, he said.

This is the kind of paternal heart people want to encounter in the confessional, the pope said.

While the priest may seek to help the penitent understand the evil committed, “we all go to the confessional to find a father, a father who helps us change our life, a father who gives us the strength to go on, a father who forgives us in the name of God.”

That is why the sacrament of penance or reconciliation is such a big responsibility for the priest, the pope said, because the people “who come to you are just looking for a father” and the priest in the confessional is there “in the place of the father who brings justice with his mercy.”

At the end of the audience, the pope greeted members of “American Circus,” an Italian troupe who, wearing bright red, white and blue outfits, performed a routine featuring cheerleading, acrobatics and juggling.

The pope was especially impressed with the juggler who bounced small rubber balls — including with the bottom of his feet — at lighting speed. “The one that was in the front was great, wasn’t he?” the pope commented to Archbishop Georg Ganswein, prefect of the papal household who was sitting next to the pope at the general audience.

Speaking to the performers directly, the pope told them, “you create beauty and beauty always brings us closer to God.”

He also recognized the hard work and training that goes into their craft and said they are a wonderful example “for all of us.”

“The seduction of an easy life, to end up with good results without effort, this is a temptation,” he said.

But with their talent and the hard work they put in behind the scenes, “you offer us a witness that life without constant exertion is a mediocre life,” he told them. “I thank you so much for your example.”