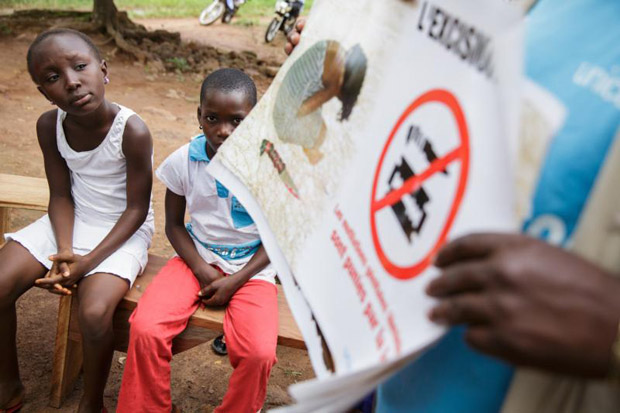 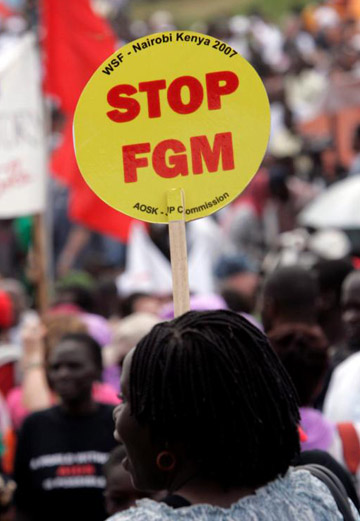 After a week of lectures and seminars, these 80 girls were announcing to their families, their church and the world: We are the light that will shine across Kenya, we will not undergo female genital mutilation.

The girls, from villages northwest of Nairobi, were participating in a Christian rite of passage, organized by Sister Ephigenia Gachiri as an alternative to genital cutting, which is a traditional, cultural rite of passage to mark the transition from girl to woman.

The Loreto sister has been crisscrossing the country in her bright yellow car for the past 16 years, bringing her message to Kenya’s most remote corners: God made you beautiful, don’t ruin his creation with female circumcision.

According to the World Health Organization, female genital mutilation — also called female circumcision or female genital cutting — is defined as any procedure that alters female genital organs for nonmedical reasons. This ranges from removing part of the clitoris, to removing part or all of the labia, to infibulation, which means sewing the vaginal opening together, only allowing for the passage of bodily fluid.

Cultural reasons for it include preserving a girl’s virginity, controlling her sexuality so she will not cheat on her husband, and promoting characteristics such as obedience and passivity.

More than 130 million girls and women alive today have undergone the ceremonial cutting in the 29 countries where it is practiced, mostly in Africa and parts of the Arab world. The World Health Organization reports that there are about 2 million to 3 million women who undergo the mutilation in Africa every year, or at least 6,000 per day.

The United Nations has established International Day of Zero Tolerance for Female Genital Mutilation, observed Feb. 6. The U.N. aims to eliminate the procedure, known as FGM, by 2030.

When Sister Gachiri first began working on this issue, she spent six months meeting every female circumciser that she could find in the Muranga district in Kenya’s interior. She had appealed to bishops in numerous regions, but found the most support among those in Muranga, a region that begins northeast of Nairobi just as the urban sprawl of the capital region ends.

Sister Gachiri, who has a doctorate in education, would sit for hours on low wooden stools, listening to the traditions leading up to the cutting ceremony. She knew that she could not approach communities to talk about this centuries-old practice unless she understood the entire ceremony and its place within the tribal culture and traditions. After she slowly gained the trust of the women circumcisers, they enthusiastically shared their traditions with Sister Gachiri. Some even gave her gifts of circumcising tools, convinced that she would be joining their sisterhood.

When she had enough material to write a book, Sister Gachiri shifted from listening to activism. She secured permission from the village chiefs, church leaders and government authorities, and began visiting schools during the week, asking to speak with the girls. On weekends, she’d visit churches, following a rural priest as he celebrated Mass at three or sometimes four different churches.

“I’d talk about how God created us, and how beautiful we are and how we spoil the body,” Sister Gachiri told the Global Sisters Report. “Sometimes they would run away from the church when they heard what I was talking about.”

She has found that women can be more attached to the tradition than men. An enormous amount of cultural importance is placed on the ritual, believed to ready the girl for adulthood, motherhood and the rest of her life. Women attached to the ritual can view it as part of a celebration of sisterhood.

Sometimes girls in tribes where the ceremony is practiced even demand to get cut, because uncut girls are treated differently in many the communities, explained Sister Gachiri.

Even if a girl has not been cut before marriage, perhaps because she comes from a place where the practice is rare, she is still at risk if she marries into an area where it is more prevalent. “If you marry a man and you’re not circumcised, none of his friends can come to your house and eat food,” Sister Gachiri explained. This complete isolation is difficult in rural areas where community support is essential.

In Kenya, 27 percent of women ages 15 to 49 have undergone the genital cutting, according to the United Nations. The process usually takes place before a girl reaches puberty, though sometimes as early as 6 or 7 years old.

After completing her research, Sister Gachiri started traveling more extensively in Muranga. She visited schools then shifted her focus to adults through women’s groups and church groups. She asked to be to lecture on the dangers of cutting and show a video she made detailing the medical issues of the unhygenic operation.

In her presentation, Sister Gachiri or a medical expert explains that the immediate health dangers include tetanus, urinary retention and infection, fever, sepsis or blood poisoning, and hemorrhaging, which can lead to death. Long-term problems include recurrent bladder and urinary tract infections, infertility, fistula (a hole in the birth canal that leads to obstructed labor), complications during labor from scar tissue, formation of cysts, dyspareunia (painful sexual intercourse), anemia and death. She also speaks about the psychological problems and the conflicts the practice creates in a marriage.

Despite initial opposition, including cultural resistance in Kenya about discussing sexual matters in a public setting, this part of the message started getting through to the groups she visited.

Sister Gachiri also researched the spiritual aspect of the ceremony for her book “Female Circumcision,” published in 2000 by Pauline Sisters Publications.

It took a few years of these seminars before Sister Gachiri realized she couldn’t just talk about the negative aspects of this rite of passage — she would have to provide an alternative. “They have to have a ritual, maybe not FGM, but something that tells the girl, ‘You are now mature and prepares them for life,'” Sister Gachiri said.

After brainstorming sessions with fellow professionals, including psychologists, religious leaders and social workers, Sister Gachiri created an alternative rite of passage adapted for Christian adolescents, along with a workbook for girls and boys.

She holds the Christian Rite of Passage ceremonies in August and December each year, during school vacations, which are the most popular times girls undergo the cutting ceremony.

At the Njoro parish, 80 girls gathered in late August 2015 for the weeklong seminar ending with the celebration of Mass.

The seminar involves 33 sessions on topics that offer psychological, emotional, mental and spiritual teachings to the girls, with an aim of giving them a smooth transition to adulthood.

There also are lectures on marriage, biological changes during adolescence, hygiene, nutrition, HIV/AIDS, and drug and alcohol abuse. Sister Gachiri’s extensive field research has enabled her to create seminars that combine traditional teachings of a certain area with modern knowledge. She has trained a staff of 30 people to run these workshops, which are always held with the blessing of the local priest, pastor or village chief.

In Njoro, six other mentors joined Sister Gachiri to teach the lectures. After seven days, the girls, most ages 13 to 16, celebrated their journey in a special graduation ceremony attended by their parents, friends and church community. The girls stood in front of the entire room and made a promise to themselves and to God, “to remain whole, the way God made me, and not to be maimed by being circumcised, to keep myself whole in the body and soul.”

One graduate, Mary Wairimu, told GSR, “I took part in this program five years ago and it changed my life. I am here today for my younger sister’s graduation. My mother and I encouraged her to come. Our parents are too shy to talk about issues around sex but Sister Ephigenia breaks that taboo.”

Wairimu, now 24, is a nurse at one of the local hospitals. “I have seen the dangers of FGM where I work in the maternity wing, and I am glad my mother brought me to Sister Ephigenia instead. I talk to my neighbors and friends and discourage them from going for the cut,” Wairimu added.

That dedication to spreading the message is exactly the intent that Sister Gachiri hopes to promote. She also feels that the increasing response to the seminars for the girls illustrates the extent to which communities are starting to embrace them.

Sister Gachiri has noticed over the years working on this issue that there has been a shift. Part of that is due to a Kenyan law passed in 2011 making female genital mutilation illegal. This means that, on paper, if a girl does not want to go through it, she can go to the police. Technically, police have the authority to arrest anyone associated with the cutting, including the parents, the circumciser, a sponsoring mentor or the host of the ceremony. However, this rarely happens for a variety of reasons, including police incompetence or collusion between police and community leaders.

Making cutting illegal has now pushed it underground, meaning it is harder to stop, and often it is not accompanied by the traditional rituals and processes that place the ceremony within a larger cultural tradition.

According to the U.N. statistics, prevalence of female genital mutilation decreased by 16 percent in Kenya from 2003 to 2008, the latest year that comprehensive statistics are available. UNICEF estimates that Kenya is one of six African countries that have made significant steps and might be able to eliminate cutting by 2030.

Sister Gachiri also has started to see results in her areas. There are many other NGOs working to stop the cutting ceremony. Since the law was passed in 2011, the national Kenyan media has started to report on instances where circumcisers were fined or arrested, or when girls died.

Information is slowly seeping to the villages, and people are beginning to realize that the cutting ceremony is dangerous and harmful to the girls, she said. Getting the medical information out is the first step. The second step is combatting deeply held tribal beliefs, partly by offering an alternative rite of passage.

“You can’t force it,” said Sister Gachiri. The answer, she explained, is education.

Her work is effective, but it is time-consuming and effects change only on a small scale. She is currently raising money to build a $60,000 “Termination of FGM” training center outside of Nairobi in hopes of reaching a larger audience across the country.

“It is tough,” she admitted. “But it needs to be someone with a passion and a vision. I will not tire. I will not stop.”

PREVIOUS: After oil spill, nuns wonder where students will bathe and play

NEXT: Disease and cold add to suffering of refugees from Mozambique