In silence, pope remembers those who cross Mexican-U.S. border 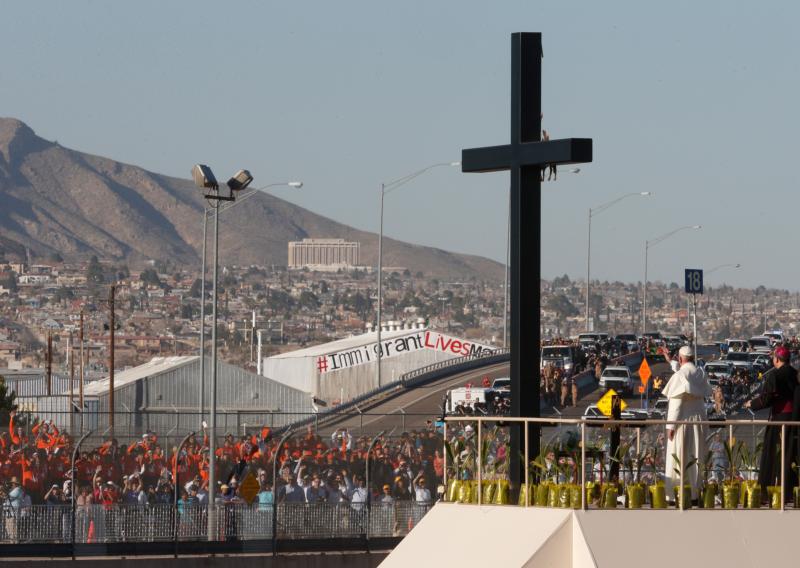 Pope Francis waves to people gathered in El Paso, Texas, after praying at a cross on the Mexican side of the border in Ciudad Juarez, Mexico, Feb. 17. (CNS photo/Paul Haring)

CIUDAD JUAREZ, Mexico (CNS) — At the border of Mexico and the United States, Pope Francis blessed a large cross in memory of all the people who have crossed the frontier.

The pope said nothing Feb. 17, but he clasped his hands tightly in prayer and bowed his head in silent prayer. He left a bunch of flowers on a table in front of the cross.

Then, to the great joy of people, including immigrants, gathered in El Paso, Texas, on the other side of the fence, the pope waved.

The whole thing lasted less than three minutes. But with hundreds of thousands of people waiting in a fairgrounds nearby for Mass, the pope was intent on taking the time to acknowledge the significance of the spot.

At the foot of the large cross were three small crosses, which the pope also blessed. They will go to the dioceses of El Paso, Ciudad Juarez and Las Cruces, New Mexico. 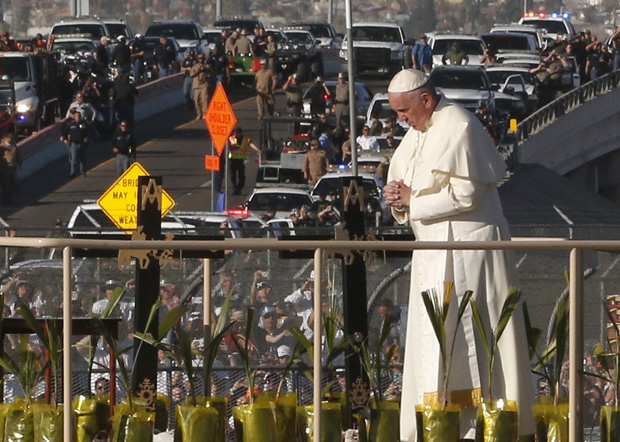 Pope Francis prays at a cross on the border with El Paso, Texas, before celebrating Mass at the fairgrounds in Ciudad Juarez, Mexico, Feb. 17. (CNS photo/Paul Haring)

But it is not only Mexicans who are crossing the border. More and more of the immigrants apprehended by the U.S. Border Patrol are from violence-torn Central American countries, particularly El Salvador, Guatemala and Honduras.

Cardinal Sean O’Malley of Boston, one of several U.S. bishops at the pope’s Mass in Ciudad Juarez, said the pope’s brief moment at the border memorial was “a great sign of hope for families separated and suffering.”

With 20 years’ experience ministering primarily to migrants, the cardinal said he can guarantee, “they bring an energy and a work ethic and a spirit of adventure that made America a great country.”

Lily Limon, of Our Lady of Mount Carmel Parish in El Paso, whose parents were immigrants from Mexico, put her hand over her heart as she saw the pope bless the border.

“To know that he was this close to us, and he took time to bless and look over to us, to the VIPs seated here, our immigrants, our young people that have crossed over undocumented, our migrant workers, this is just an incredible gesture and for us and unforgettable experience.”

There were about 550 people seated on the U.S. side of the Rio Grande taking part in the Mass.

Contributing to this story was Nancy Wiechec in El Paso.

NEXT: Transcript of press conference with Pope Francis