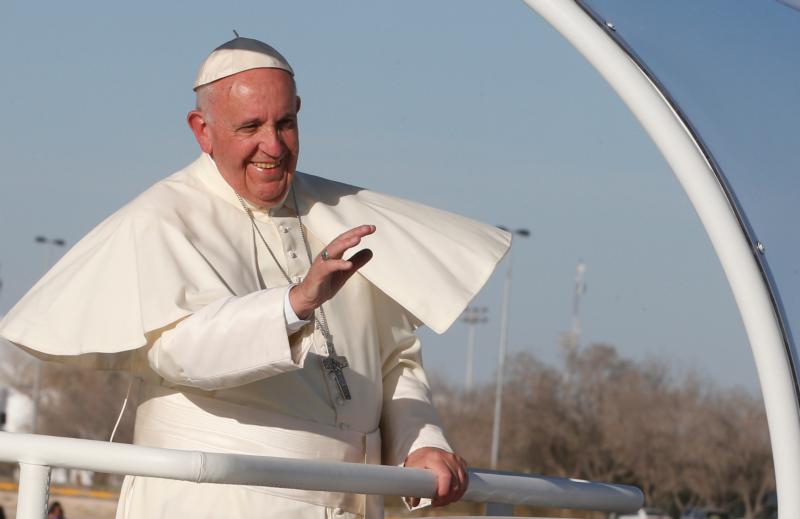 Pope Francis waves from the popemobile after praying at a cross on the border with El Paso, Texas, in Ciudad Juarez, Mexico, Feb. 17. (CNS photo/Paul Haring)

CIUDAD JUAREZ, Mexico (CNS) — Speaking from the symbolic platform of the U.S.-Mexico border, Pope Francis pleaded for the plight of immigrants while warning those refusing to offer safe shelter and passage that their actions and inhospitable attitudes were bringing about dishonor and self-destruction as their hearts hardened and they “lost their sensitivity to pain.”

Recalling the story of Jonah and his instructions from God to save the sinful city of Ninevah by telling the residents that “injustice has infected their way of seeing the world,” Pope Francis’ homily called for compassion, change and conversion on migration issues.

He alluded to Mexico and the United States as Ninevah, the city he said was showing symptoms of “self-destruction as a result of oppression, dishonor, violence and injustice.” He also said mercy was a way to win over opponents.

“The human tragedy that is forced migration is a global phenomenon today. This crisis, which can be measured in numbers and statistics, we want to measure instead with names, stories and families.”

The Mass capped a six-day trip to Mexico in which Pope Francis traveled to the northern and southern borders and denounced the indignities of discrimination, corruption and violence. During the trip he also asked oft-oppressed indigenous peoples for their forgiveness and chastised the privileged political and business classes — saying their exclusionary actions were creating “fertile ground” for children to fall into organized crime and drug cartels.

Pope Francis delivered his homily a stone’s throw from the Rio Grande, which has swallowed so many migrants over the years as they vainly tried to enter the United States in search of bettering their lot in life and, more recently, escaping violence enveloping Central America. 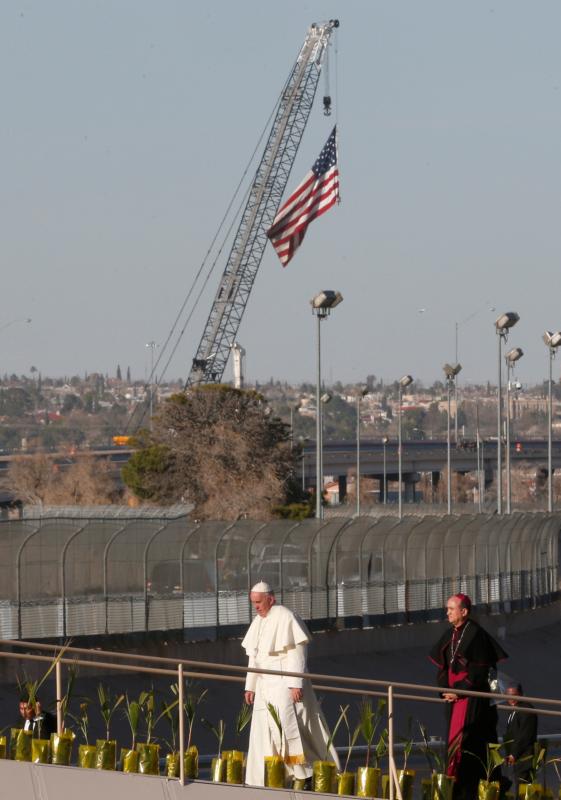 The Mass was celebrated as a binational event with thousands watching across the Rio Grande in El Paso and in a college football stadium. Pope Francis saluted the crowds watching at the Sun Bowl stadium and Bishop Mark Seitz of El Paso for providing technological connections that allowed them to “pray, sing and celebrate together” and “make us feel like a single family and the same Christian community.”

The pope focused on migration, along with the dangers migrants encounter en route to their destinations and the difficulties of surviving on the margins of society without protections.

“Being faced with so many legal vacuums, they get caught up in a web that ensnares and always destroys the poorest,” Pope Francis said.

Migration has marked Mexico for generations, though the number of Mexicans leaving the country is now surpassed by those returning — involuntarily or otherwise — as poor job prospects, an increasingly fortified border and anti-immigration initiatives prompt most to stay put.

Ironically, Mexico has assumed an unlikely role over the past several years: enforcer as it detains and deports record numbers of Central Americans trying to transit the country — while many more of those migrants are preyed upon by criminals and corrupt public officials and suffer crimes such as kidnap, robbery and rape. The Mexican crackdown came after thousands of Central American children streamed through Mexico in 2014, seeking to escape forced enlistment in gangs and hoping to reunite with parents living in the shadows of American society, working minimum-wage jobs to support children left with relatives they hadn’t seen in years.

“Each step, a journey laden with grave injustices. … They are brothers and sisters of those excluded as a result of poverty and violence, drug trafficking and criminal organizations,” Pope Francis said, while lauding the priests, religious and lay Catholics who accompany and protect migrants as they move through Mexico — acts of compassion not always popular with the authorities.

“They are on the front lines, often risking their own lives,” he said. “By their very lives they are prophets of mercy. They are the beating heart and accompanying feet of the church that opens its arms and sustains.”

“They are brothers and sisters of those excluded as a result of poverty and violence, drug trafficking and criminal organizations,” Pope Francis said. “Injustice is radicalized in the young. They are ‘cannon fodder,’ persecuted and threatened when they try to flee the spiral of violence and hell of drugs. Then there are the women unjustly robbed of their lives.”

Pope Francis ended his homily by returning to the example of Jonah and his call for conversion in Ninevah. He called “mercy, which always rejects wickedness,” a way to win over opponents, saying it “always appeals to the latent and numbed goodness in every person,” and urged people to follow Jonah’s example.

Ciudad Juarez once held the dubious distinction of “murder capital of the world.” More than 10,000 lives were lost between 2008 and 2012 as drug cartels battled over a coveted smuggling route and young people were seduced by easy money into illegal activities that led to their deaths.

The pope’s visit was promoted by civic officials as a rebirth for Ciudad Juarez, though priests say the city still suffers vices such as exclusion and violence — in lower numbers than before — and jobs with low salaries and long hours in the booming factory for export economy, all of which strain family life.

PREVIOUS: Vatican invites head of al-Azhar to meet with pope to restart dialogue

NEXT: In silence, pope remembers those who cross Mexican-U.S. border