Negotiating table is only way to bring peace to Syria, pope says 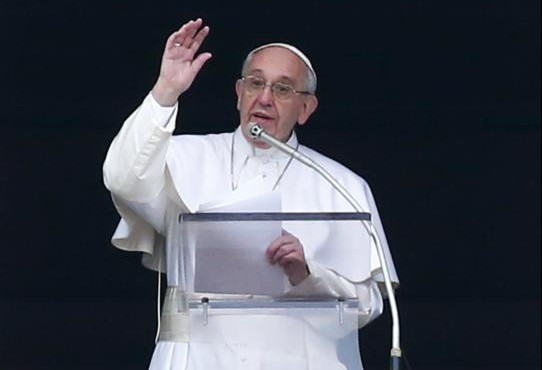 Pope Francis leads his Angelus from the window of his studio overlooking St. Peter's Square at the Vatican Feb. 7. The pope said the negotiating table is only way to bring peace to Syria. (CNS photo/Tony Gentile, Reuters)

VATICAN CITY (CNS) — A negotiated political resolution is the only answer to the crisis unfolding in Syria, Pope Francis said, urging world leaders to do everything possible to kick-start talks.

Inviting people to intensify their prayers, he also asked everyone to be generous in offering the kind of help needed to guarantee the “survival and dignity” of Syrians fleeing the conflict.

“With great concern, I am following the tragic fate of civilians caught up in violent battles in beloved Syria and forced to abandon everything to flee the horrors of war,” he said after praying the Angelus with those gathered in St. Peter’s Square Feb. 7.

The pope launched an “appeal to the international community to not spare any effort in urgently bringing the parties concerned to the negotiating table. Only a political solution of the conflict will be capable of guaranteeing a future of reconciliation and peace.”

He also called for greater efforts in ending human trafficking by “destroying this crime and this intolerable disgrace.”

The International Day of Prayer and Awareness against Human Trafficking Feb. 8, he said, was an opportunity for everyone “to help today’s new slaves break the heavy chains of exploitation and regain their freedom and dignity.”

On Italy’s Pro-Life Day, he also encouraged the country’s bishops and Catholic institutions to renew their commitment to promote human life from conception to its natural end.

“Our society should be helped to be healed from all attacks on life, daring inner change, which also is expressed through works of mercy,” he said.

In his Gospel reflection before praying the Angelus, the pope said when people recognize and are in awe of Christ’s divinity, it is easy for them to believe they are not worthy enough for God.

Just as Peter urged Christ, “Depart from me, Lord, for I am a sinful man,” most people “think there should be distance between the sinner and the saint,” the pope said.

However, it is precisely “the sinner’s condition that demands the Lord not distance himself in the same way a doctor cannot walk away from a person who is sick,” he said.

By telling Peter and the apostles to not be afraid and making then “fishers of men,” Jesus reveals the essence of Christianity — to bring far and wide “the regenerative and freely given love of God.”

Pope Francis asked if people knew how to truly trust in the Lord’s word and not be afraid despite their sins and failings.

“In this Holy Year of Mercy, we are called to comfort those who feel like sinners and unworthy before the Lord and discouraged because of their errors.”

“Do not be afraid. The father’s mercy is greater than your sins,” he said.

PREVIOUS: Pope says he goes to Mexico as a ‘missionary of mercy, peace’

NEXT: Ukrainian Catholics don’t expect much from pope-patriarch meeting