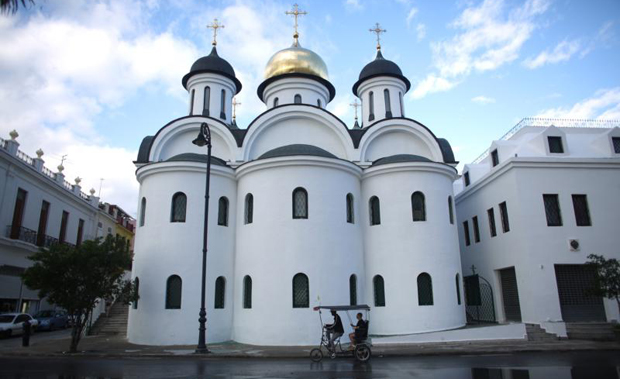 A pedicab with a Vatican flag passes in front of the Russian Orthodox church in Havana Feb. 7.Pope Francis and Russian Orthodox Patriarch Kirill will meet in Cuba Feb. 12. (CNS photo/Alexandre Meneghini, Reuters) 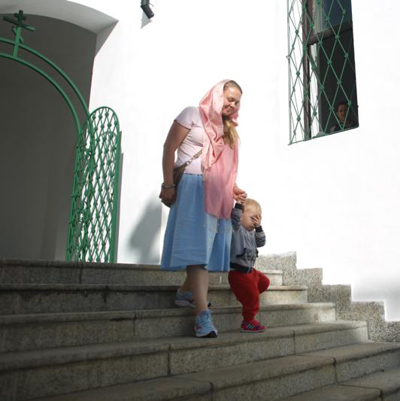 A mother and child walk before a Sunday liturgy at the Russian Orthodox church in Havana Feb. 7. Pope Francis and Russian Orthodox Patriarch Kirill will meet in Cuba Feb. 12. (CNS photo/Alexandre Meneghini, Reuters)

“I do not expect that the meeting of Pope Francis with Patriarch Kirill, planned for Feb. 12, will bring any particular changes. Although it is good that the meeting will take place,” said Ukrainian Archbishop Sviatoslav Shevchuk of Kiev-Halych, the major archbishop of the church.

“I am pleased,” the archbishop said, that “we are no longer considered an obstacle and aren’t being used to justify one’s unwillingness to engage in such dialogue.”

(See a commentary on the coming meeting by a Philadelphia priest professor.)

Although both St. John Paul II and Pope Benedict XVI expressed hopes for a meeting with the Moscow patriarch, the Russian Orthodox insisted the activity of the Ukrainian Catholics and of Latin-rite Catholics in Russia amounted to “proselytism” and was an obstacle to such a meeting.

Russian Orthodox Metropolitan Hilarion of Volokolamsk, director of foreign relations for the Moscow Patriarchate, told reporters Feb. 5 that the presence and activity of the Ukrainian Catholics were still an obstacle to fully normal church relations; he insisted that Patriarch Kirill agreed to meet the pope because finding a common way to help persecuted Christians in the Middle East is a more pressing matter.

Pope Francis, in an interview published Feb. 8 in an Italian paper, when asked about the meeting, said, “Bridges. They must be constructed step by step until you are able to shake the hand of the person on the other side.”

“Bridges last and promote peace,” the pope told the newspaper Corriere della Sera. Walls not only divide people, but they must be defended, which takes energy. “For this reason, they need to be taken down, not built. Anyway, they are destined to fall, one after another. Think of the Berlin Wall. It seemed eternal and yet, poof, in a day it fell.”

Pope Francis insisted he did little to make the meeting happen. “I just said that I wanted to meet and embrace my Orthodox brothers. Just that. Then there were two years of secret negotiations, conducted well by great bishops,” he said.

Dominican Father Hyacinthe Destivelle, the official of the Pontifical Council for Promoting Christian Unity who did much of the work on the Vatican side to prepare the meeting, told Vatican Radio it was the culmination of much work, but also is a “point of departure in our relations to the degree that from now on we can have a normal relationship based on trust.”

The two years of negotiations to set up the meeting were accompanied by another complicating factor: The Russian annexation of Crimea from Ukraine in 2014 and the ongoing war in Eastern Ukraine, which naturally create further tensions between Ukrainian Catholics and Russian Orthodox.

“It is likely that during the meeting of the pope with the patriarch they will also speak of the present situation in Ukraine,” Archbishop Shevchuk said in his statement. “I hope that His Holiness Pope Francis, who always raises his voice in defense of the wronged, will be a voice for Ukrainians, who are engaged in a battle for the unity and integrity of their land.”

Father Peter Galadza, acting director of the Sheptytsky Institute at St. Paul University in Ottawa, Ontario, issued a statement Feb. 5 expressing his hope that the pope not only would raise the issue of Russian aggression against Ukraine, but also the support some Russian Orthodox leaders have given to “the notion of a ‘Russian World'” or “Russkiy Mir,” which sees the entire former Soviet Union as an area needing the special protection of Russia. Father Galadza said the notion “has hampered inter-ethnic harmony and understanding” and “evokes the Russification policies of the USSR.”

Father Destivelle, who is helping draft a joint statement for the pope and patriarch to sign, said it is likely to focus on “areas for collaboration and dialogue, which do not have a theological character but are important for the churches to draw closer together,” including joint efforts on behalf of persecuted Christians in the Middle East, protecting the family and the role of Christians in secularized societies.

PREVIOUS: Negotiating table is only way to bring peace to Syria, pope says

NEXT: Papal commission on sex abuse votes that member take leave of absence