Pope calls for ‘harmonized response’ to migrant crisis in Greece 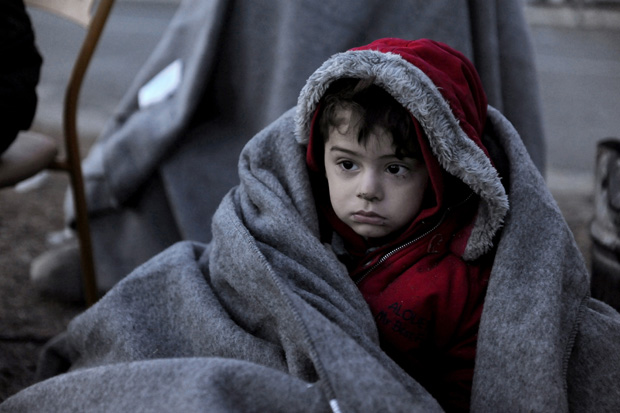 A migrant child is covered with a blanket as he and other refugees and migrants wait to cross the Greek-Macedonian border Jan. 28 near the village of Idomeni, Greece. (CNS photo/Alexandros Avramidis, Reuters)

VATICAN CITY (CNS) — Countries like Greece that are on the front line of the migrant crisis need the cooperation of all nations to help those fleeing from “wars and other inhuman situations,” Pope Francis said.

“A harmonized response can be effective and equally distribute the weight,” he said Feb. 28 after reciting the Angelus with visitors gathered in St. Peter’s Square.

Thousands of Syrian and Iraqi refugees were stranded in Idomeni, Greece, in late February after Balkan countries announced a daily cap of migrants crossing their borders. Greek officials estimated that up to 70,000 migrants may be trapped in the country in the coming month, according to Agence France-Presse.

Noting the generosity of countries like Greece, which are handling the growing influx of migrants, the pope called on European Union member states to “focus decisively and unreservedly on negotiations” to assist nations receiving refugees.

The pope also expressed his hope that a cease-fire in Syria might bring humanitarian relief to the suffering population and “open the path to a much-desired dialogue and peace.”

In his remarks before reciting the Angelus prayer, the pope said that tragedies, accidents and catastrophes are often misinterpreted as a sign of divine punishment from God.

He said the day’s Gospel reading (Lk 13: 1-9), shows Jesus’ awareness of his listeners’ “superstitious mentality” in the face of two tragic events: the Roman suppression at a temple and the falling of the tower of Siloam that killed 18 people.

“In fact, they thought that, if those people had died in such a way, cruelly, it was a sign that God had punished them for some grave sin they had committed, as if saying ‘they deserved it.’ And on the other hand, the fact of being saved from such a disgrace made them feel ‘good about themselves,'” the pope said.

The same temptation to “unload” responsibility on victims or on God exists in the face of today’s tragedies, the pope said, and he called on Christians to change their hearts and not follow the path of hypocrisy.

“How many times we have thought this: ‘But I’m basically good; I’m a good person’ and justify ourselves,” the pope said.

Pope Francis prayed that, through Mary’s intercession, Christians may “never judge others, but rather allow daily misfortunes to provoke us into making a serious examination of our consciences.”