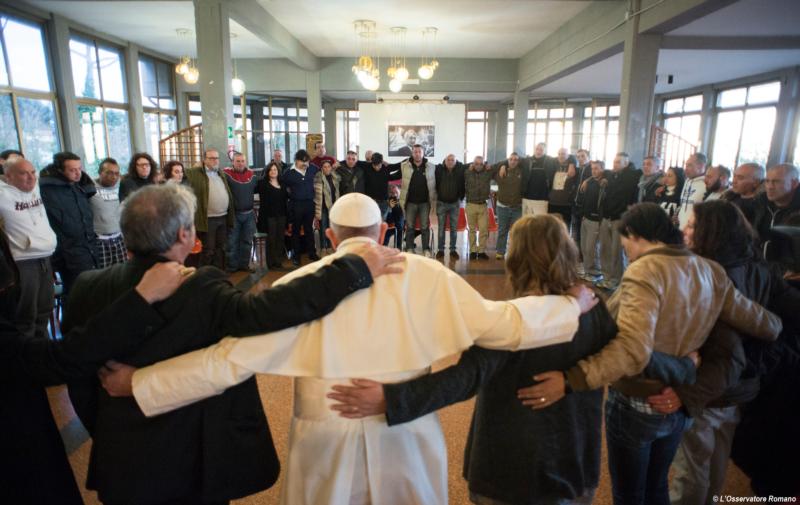 VATICAN CITY (CNS) — In the second of his “Mercy Friday” gestures, Pope Francis spent two hours with a group of young adults at a Catholic-run residential drug rehabilitation center.

To the complete surprise of the 55 residents, Pope Francis showed up in his compact Ford Escort at the San Carlo Community Feb. 26 with just a driver. Archbishop Rino Fisichella, organizer of the Vatican’s Year of Mercy events, arrived separately at the community outside of Rome near Castel Gandolfo.

“We were speechless when we saw the car with the pope enter our community where every day our young people fight their battle to return to life,” said Roberto Mineo, president of the Italian Solidarity Center, which runs the facility. “The pope, like a caring father, spent a long time which each person, listening to their stories and embracing them one by one. Some of the young people showed him photos of their families, their children, and the pope had a word of hope and a blessing for each of them.”

Using tiny photos of past and present community members, the residents had made a mosaic of Our Lady of Lujan, patroness of Argentina, and asked Pope Francis to sign it, which he did “with affection and friendship.” 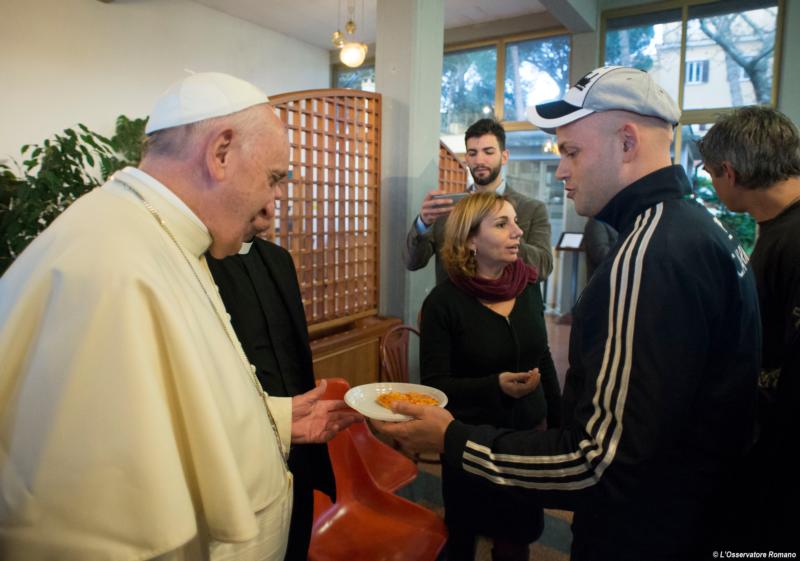 Pope Francis accepts a slice of pizza from a patient at the San Carlo community.

Sitting in a large circle, Pope Francis asked the residents about their activities and learned that one of their therapeutic projects is learning how to cook. “What is the best thing you make?” the pope asked. Their response was not reported by the few people present, but at break time, they shared with Pope Francis some of their cheese pizza, made from scratch.

In a press release, Archbishop Fisichella said Pope Francis chose the drug rehab center as a follow-up to his visit to Mexico where he repeatedly denounced drug traffickers and urged Catholic pastors and parishioners to be close to all those who have fallen prey to drug addiction. 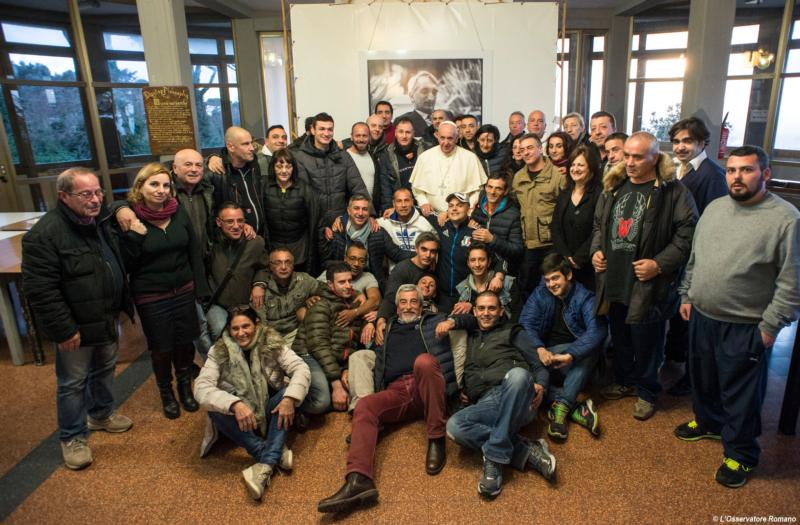 Pope Francis poses for a photo with some of the patients of the Catholic-run drug rehabilitation center. (CNS photo/L’Osservatore Romano) See MERCY-FRIDAY-REHAB Feb. 29, 2016.

In one of his earliest Year of Mercy events, in December, Pope Francis opened a “door of charity” at the main soup kitchen of the Rome diocesan Caritas. One Friday a month for the rest of the jubilee year, Pope Francis was to demonstrate personally the works of mercy. In January, he visited a home for the aged and a nearby facility caring for people in persistent vegetative states. Reporters are not invited to accompany the pope and news of the events is not released until the pope already has arrived.

Also related to the Year of Mercy, an Italian group of physicians and nurses — Solidarity Medicine — opened a mobile health clinic for the poor and homeless under the colonnade at St. Peter’s Square Feb. 29. Working with the papal almoner’s office, which installed showers there and coordinates the weekly visit of barbers, the doctors and nurses will offer checkups and referrals for tests.

NEXT: Pope calls for ‘harmonized response’ to migrant crisis in Greece