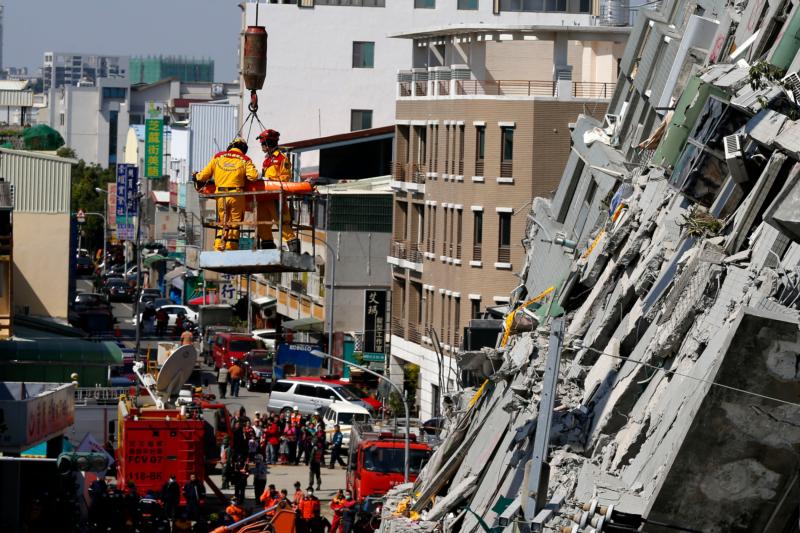 An earthquake survivor is seen on a crane Feb. 8 in Tainan City, Taiwan. Pope Francis sent condolences following the quake that hit as the island prepared to celebrate Chinese New Year. (CNS photo/Ritchie B. Tongo, EPA)

“The Holy Father was saddened to learn of the suffering caused by the deadly earthquake which struck Tainan, leaving many people dead or seriously injured,” read a message sent by Cardinal Pietro Parolin, Vatican secretary of state, on behalf of the pope.

The magnitude-6.4 quake hit the southern city of Tainan early Feb. 6. Two people were rescued from the ruins of an apartment building on the morning of Feb. 8, more than 48 hours after it collapsed on itself.

A woman was pulled out of the rubble underneath the body of her husband with their 2-year-old son also found dead nearby, Taiwanese media reported. A man was found alive shortly afterward, but he had severe injuries.

At least 527 people have been injured and many more have lost their homes as the quake also forced the cancellation of trains a day before the island began celebrating Chinese New Year.

Ucanews.com reported that Archbishop John Hung Shan-chuan of Taipei, president of the Taiwan bishops’ conference, called on Catholics to pray for victims during his Chinese New Year Mass Feb. 7.

Tainan Diocese was among religious groups and other donors who together submitted NT$400 million (US$12 million) in goods after the earthquake, causing authorities to run out of storage space. Cash donations have since been requested instead.

“After the earthquake, the diocese started handing out necessities like water and clothes,” said Father Joseph Lee, a priest in Tainan.

At least two Catholic churches were among a number of religious buildings reported damaged in historic Tainan, the oldest city in Taiwan.

NEXT: Woman to lead theological-pastoral aspect of Vatican communications