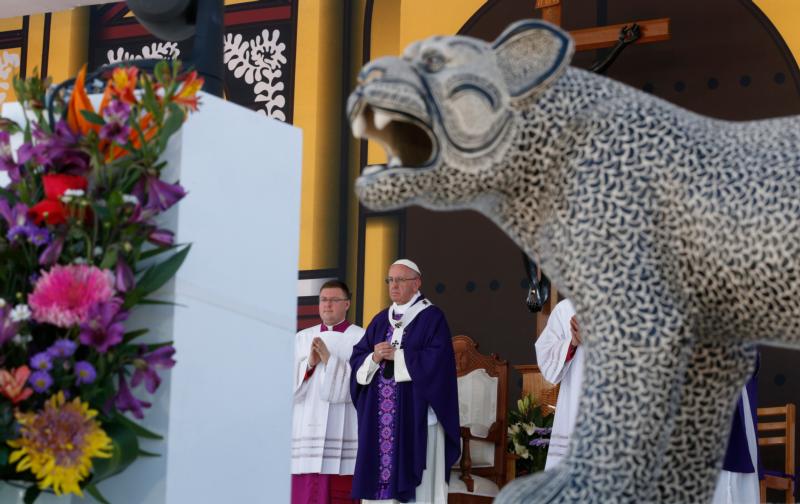 SAN CRISTOBAL DE LAS CASAS, Mexico (CNS) — Paying homage to the culture and ancient wisdom of Mexico’s indigenous peoples, Pope Francis urged them to hold on to hope and condemned those who exploit their people and their land.

“Some have considered your values, culture and traditions to be inferior. Others, intoxicated by power, money and market trends, have stolen your lands or contaminated them,” the pope said at a Mass Feb. 15 with representatives of Mexico’s indigenous communities.

“You have much to teach us,” he told the elders, activists and simple faithful gathered at a sports complex in San Cristobal de Las Casas, a city in Chiapas, Mexico’s southernmost state, and a center of advocacy and struggle for the indigenous rights.

Chiapas, and particularly the Diocese of San Cristobal de Las Casas, also has been a center of official Catholic support for indigenous culture, support that was not always shared by all of Mexico’s bishops.

During his stay in the city, Pope Francis communicated the Vatican’s official approval of the use of the local languages in liturgical prayer. Two of the languages — Tzotzil and Tzeltal — were used for some of the readings and prayers during the pope’s Mass. And, after the pope read his homily in Spanish, it was translated for the many in the crowd who speak only their Mayan tongue.

It was under Pope Francis that the diocese was allowed to start ordaining permanent deacons again in 2014 after ordering a 12-year suspension. The vast majority of the diocese’s more than 300 permanent deacons are married leaders in their indigenous communities; the late Bishop Samuel Ruiz Garcia began ordaining large numbers of the leaders in a program of pastoral outreach that many saw as exaggerating the place of indigenous culture in the local church, but also as a potential first step toward pushing for married priests for indigenous communities. 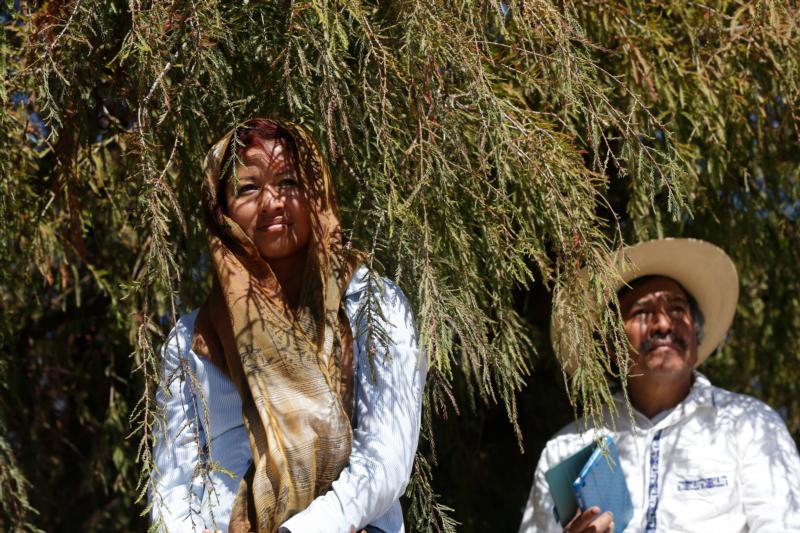 The cheer also hailed the pope for wanting “a church that is born of the people” and bishops and priests who are “alongside the poor.”

To applause, the priest also acclaimed, “The people walk with Tatic Samuel (Bishop Ruiz) and Tatic Francis, who encourages us.” Tatic is the Mayan word for father.

In a country rich in natural resources, but scarred by pollution and inequality, Pope Francis compared the indigenous communities to the ancient Israelites enslaved in Egypt, and he assured them that God hears their cry for dignity and respect and their longing to protect their cultures.

In responding to the oppression of the Israelites, the pope said, God showed them his true face, “the face of a father who suffers as he sees the pain, mistreatment and lack of justice for his children.”

“They say that Chiapas is a rich state, but we don’t know where these riches are,” said Manuel Mendez, a vegetable farmer. Wearing a lambs-wool robe at Mass, Mendez comes from the tough indigenous town of San Juan Chamula — where the local authorities clashed with Bishop Ruiz and refused to allow his priests to serve while he led the diocese.

The federal and state governments have sent enormous sums of money to Chiapas since the 1994 Zapatista uprising of indigenous, but poverty rates have remained unchanged and still top 75 percent of the population.

“It’s better, but there are still great needs,” said Domingo Lopez, a corn farmer from the municipality of Oxchuc, who camped out overnight in the cold at the Mass site with 11 family members.

Pope Francis quoted “Popol Vuh,” a collection of traditional indigenous literature, which says, “The dawn rises on all of the tribes together. The face of the earth was immediately healed by the sun.” The story, he said, illustrates how “the sun rose for the people who at various times have walked in the midst of history’s darkest moments.”

The quotation expresses a yearning for freedom and for reaching “a promised land where oppression, mistreatment and humiliation are not the currency of the day,” Pope Francis said.

Mexico’s indigenous and many other people around the world still yearn for such a land and “for a time when human corruption will be overcome by fraternity, when injustice will be conquered by solidarity and when violence will be silenced by peace.”

Today, too, God suffers when his children do, he said.  In his greatest sign of solidarity with humanity, God sent his son into the world to live like them and to suffer and die to save them.

God’s son rose “so that darkness may not have the last word and dawn may not cease to rise on the lives of his sons and daughters,” the pope told the people.

The yearning for freedom and a bright future is something to hold on to and keep alive, Pope Francis said. People must resist attempts others make to silence their yearning, “anesthetize our soul” or “lull our children” into thinking that nothing can change and their dreams will never come true.

The main road leading to the sports center was decorated with banners featuring photos of local people and quotations from Pope Francis, many of them from his encyclical, “Laudato Si’,” on safeguarding creation.

At the Mass, the pope praised the indigenous people’s wisdom in caring for the earth and encouraged their efforts to defend it from further destruction.

“The environmental challenge that we are experiencing and its human causes, affect us all and demands our response,” he said. “We can no longer remain silent before one of the greatest environmental crises in world history.”

Contributing to this story was David Agren in San Cristobal de Las Casas.

NEXT: At El Paso church, people pray day and night for pope in Mexico