At El Paso church, people pray day and night for pope in Mexico 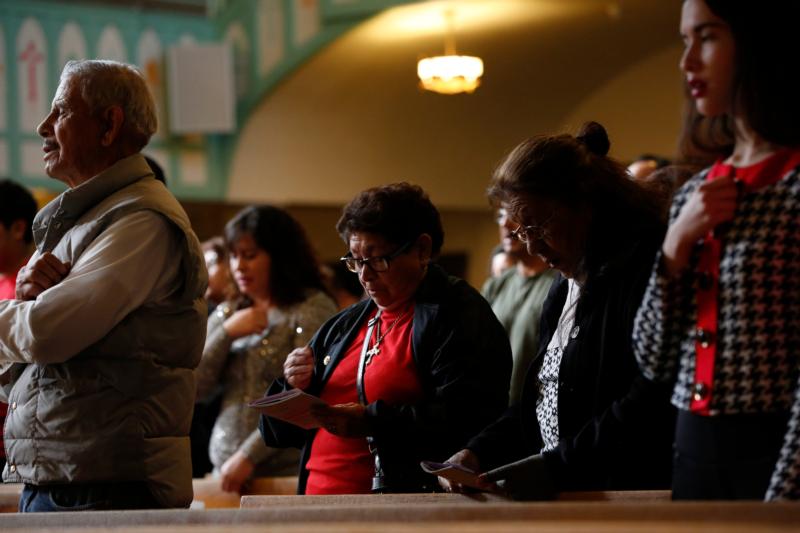 Sacred Heart Parish in the Segundo Barrio of El Paso, Texas, is located a few blocks from the border with Mexico. Sacred Heart parishioners were praying daily for the safety of the pope as he made his way through Mexico. His last stop will be in Ciudad Juarez, just across the border. (CNS photo/Nancy Wiechec) S

EL PASO, Texas (CNS) — In Segundo Barrio, people having been praying day and night for Pope Francis since he set foot in Mexico.

Kneelers were set in front of a figure of the pope in the courtyard of the barrio’s Sacred Heart Church. An image of Our Lady of Guadalupe in tile on a red brick wall peered over the shoulder of his cardboard likeness.

“Every day since the pope arrived in Mexico, in the morning and evening, we pray the rosary for his intentions — for mercy, peace and for his protection,” said Raquel Garay Williams, a member of the parish council. “Our hope is that the Lord answers our prayers.”

Williams was among dozens of parishioners stopping to pray at the temporary shrine Feb. 14, three days before the pope was to end his six-day Mexican visit in Ciudad Juarez, the Mexican community on the border and El Paso’s sister city.

Images of the pope with words of welcome appeared on walls in and around Sacred Heart Church and the Segundo neighborhood.

A culturally vibrant parish, Sacred Heart’s roots stretch back nearly 125 years. It is located blocks from one of El Paso’s busy border crossings. Jesuit-founded and run, the parish serves people in the barrio as well as immigrants and people passing through.

Masses are held in Spanish or in English and Spanish. With its sacramental and catechetical ministries, the parish offers English classes and courses in computer literacy and citizenship. From its parish hall, it runs a restaurant and catering business that employs people and offers low-cost meals.

Florencio Flores, who was born in Mexico but was brought to the U.S. as an infant, has called Segundo Barrio home for quite some time. He stopped in Sacred Heart’s courtyard to kneel and offer a short prayer. He carried the parish bulletin featuring Pope Francis on the front.

“Mexico needs peace for its people,” he said. “Now, with the pope (there), people may find that peace in their heart — to live a new life with Jesus centered in their heart.”

Also visiting the makeshift shrine was the Macias family.

Flor, Olivia and Rose Macias stood in front of the cardboard pope and smiled brightly as their dad clicked a cellphone photo.

It is as close as most will get to the pope himself, but that had not dampened their excitement for his visit to the border area.

Archbishop Joseph E. Kurtz of Louisville, Kentucky, president of the U.S. Conference of Catholic Bishops, has asked U.S. Catholics to “unite in prayer with our sisters and brothers in Mexico — especially those most in need of mercy and hope, those suffering most in poverty and fear — and celebrate the great blessing of the Holy Father’s journey to their great nation.”

The archbishop will be with other Americans on the levee in El Paso when Pope Francis celebrates Mass in Ciudad Juarez.