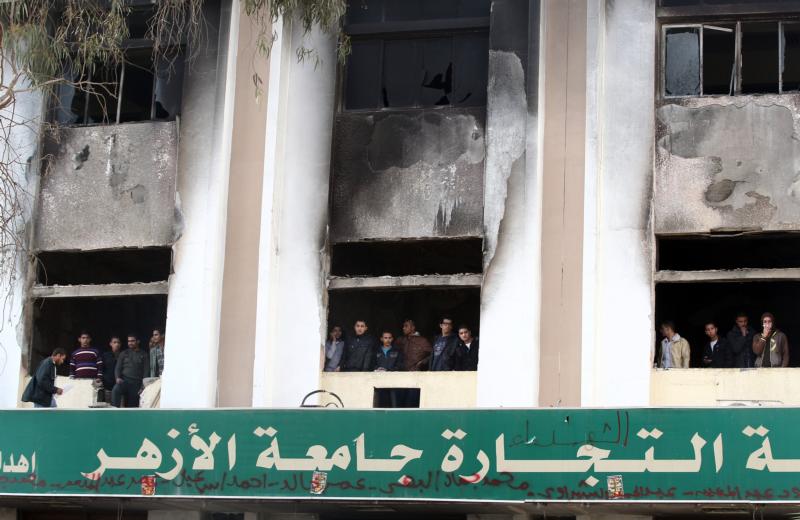 In this Dec. 29, 2013, file photo, Egyptian students look out the windows of a faculty building at Cairo's al-Azhar University one day after student supporters of the Muslim Brotherhood set it on fire in Cairo, Egypt. The Vatican's interreligious council invited Ahmad el-Tayeb, the grand imam of al-Azhar University, to travel to the Vatican and meet with Pope Francis. (CNS photo/Khaled Elfiqi, EPA)

VATICAN CITY (CNS) — The Vatican’s interreligious council invited the head of a leading Muslim institution to meet with Pope Francis as part of an effort to restart dialogue.

Cardinal Jean-Louis Tauran, president of the Pontifical Council for Interreligious Dialogue, invited Ahmad el-Tayeb, the grand imam of al-Azhar University, to come to the Vatican and meet with the pope.

The invitation came in a letter that was delivered by Bishop Miguel Ayuso Guixot, council secretary, and given to the imam’s representative during a meeting in Cairo Feb. 16.

Talks between the Vatican and al-Azhar were suspended by the Muslim university in 2011.

A decades-old dialogue between al-Azhar and the Vatican started to fray in 2006, after now-retired Pope Benedict XVI gave a speech in Regensburg, Germany. Al-Azhar officials and millions of Muslims said the speech linked Islam to violence.

During the meeting Feb. 16, the delegations from the Vatican and al-Azhar talked about “the need to restart dialogue between the two institutions,” according to a Vatican communique released Feb. 17.

The two sides agreed on “the importance of continuing and deepening such dialogue for the good of humanity,” the communique said.

In his letter, Cardinal Tauran expressed his “willingness to receive the grand imam and officially accompany him in an audience with the Holy Father.”

In a statement published Feb. 17 by Fides, the news agency of the Congregation for the Evangelization of Peoples, al-Azhar said the two sides “have agreed on the need to hold a joint meeting to exit the phase of suspension of the bilateral dialogue.”

Bishop Ayuso told Fides that the Vatican was ready to receive a delegation from the theological institution in order to kick-start dialogue at the service of peace.

The Vatican delegation went to Cairo, Bishop Ayuso told the news service, “to express the desire to resume friendly relations of cooperation, that on our behalf have never stopped, and to recall the importance of our cooperation for the common good of the entire human family.”

“Religious leaders, with their collaboration, want to give an important contribution: In the moment of darkness that we are experiencing, it is important that there are converging forces, intentions and even actions in favor of the wounded humanity, which greatly needs to be healed,” he said.

NEXT: Pope decries death and exploitation at U.S.-Mexico border