Going through a Holy Door? Check this video guide 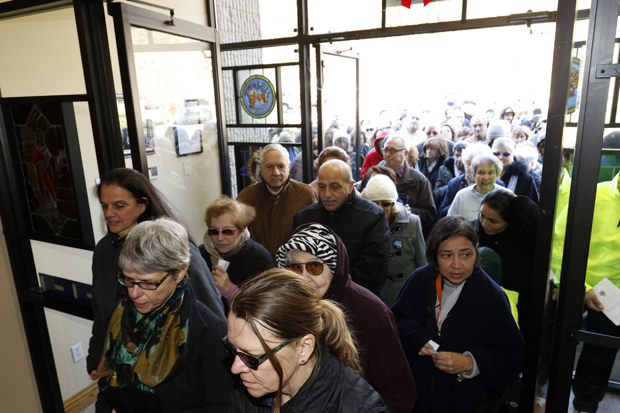 Pilgrims pass through the Door of Mercy after it was officially opened Dec. 19 at Our Lady of the Island Shrine in Manorville, N.Y. The shrine is one of four sites designated by the Diocese of Rockville Centre, N.Y., to be places of pilgrimage during the Year of Mercy. (CNS photo/Gregory A. Shemitz, Long Island Catholic)

VATICAN CITY (CNS) — A Catholic media company has created a guide to help the faithful through their pilgrimage during this year’s Jubilee of Mercy.

Misericordia Media, a Catholic Bytes initiative, planned to release a 10-minute video March 4 as part of their guides for “pilgrims journeying through any Mercy Door during the Holy Year of Mercy,” said a press release.

“In instituting this Holy Year, Pope Francis expressed his desire for all people to experience the mercy of God, and this initiative offers pilgrims the opportunity to reflect more deeply upon this time of mercy,” said Father George Elliot, director and co-founder of Catholic Bytes, a podcast that delivers talks on various topics about the Catholic faith.

Pope Francis had asked that all dioceses around the world designate a “Door of Mercy” at their cathedral or another special church or shrine, and that every diocese implement the “24 Hours for the Lord” initiative on the Friday and Saturday before the fourth week of Lent.

In Rome the past two years, the pope has opened the celebration with a penance service in St. Peter’s Basilica, and churches around the city were open for the next 24 hours for confessions and eucharistic adoration. Misericordia Media’s video guide is set to be released in conjunction with the pope’s event.

Misericordia Media’s video follows an audio guide that was released Dec. 8 to mark the opening of the Year of Mercy. The seven-minute guide offered “a historical background on jubilees and a reflection on mercy,” based on Scripture and Pope Francis’ document proclaiming the jubilee year, the press release said.

It mainly focused on the significance of conversion as well as the importance of extending God’s mercy to others, whereas the 10-minute video guide was created specifically for pilgrims visiting St. Peter’s Basilica.

The video “strives to deepen pilgrims’ faith in Jesus Christ through their pilgrimage to St. Peter’s,” said the press release, and featured stunning views of both the interior and exterior of the basilica while delving into its history.

Both segments of the audio-video guide are available in Italian, English, Spanish, French, Portuguese, German and Polish. Pilgrims starting or continuing on their journey of faith can view the guides at https://misericordia.media.