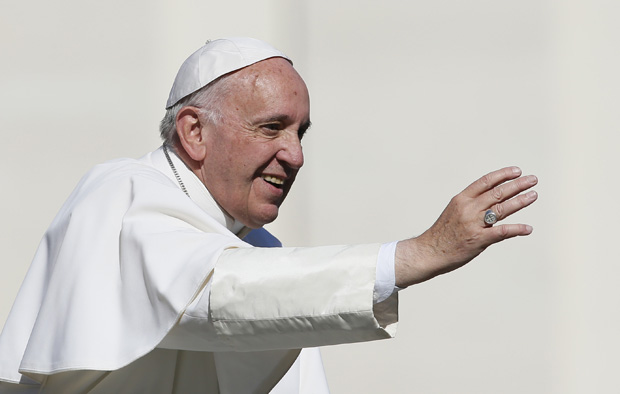 Pope Francis waves as he leaves his general audience in St. Peter's Square at the Vatican March 2. (CNS photo/Paul Haring)

VATICAN CITY (CNS) — God’s mercy can be understood only by someone who has an open heart and recognizes his or her sins, Pope Francis said.

Unfaithfulness to God “hardens the heart, it closes the heart,” the pope said March 3 during the Mass in the chapel of the Domus Sanctae Marthae.

“It does not allow one to hear the voice of the Lord who, as a loving father, always asks us to open ourselves to his mercy and his love,” the pope said.

The Psalm passage, “If today you hear his voice, harden not your hearts,” is a reminder of the fatherly tenderness of God, who calls sinners back to him.

However, “when the heart is hard, this is not understood. The mercy of God can only be understood if you are able to open your heart, so that he may enter,” he said.

The day’s reading from the Gospel of Luke (11:14-23), in which Jesus rebukes those who criticized him after exorcising a demon, shows how hardened people’s hearts can be, even in the face of a miracle.

Although they were well-versed in theology, the scribes who criticized Jesus “were very closed” compared the crowds who had faith in Jesus. The people in the crowd “had an open heart. (They were) imperfect sinners but with an open heart,” he said.

“These theologians, instead, had a closed attitude. They always looked for an explanation to not understand Jesus’ message and would ask for a sign from heaven. Always closed! It was Jesus who had to justify his actions,” the pope said.

In the scribes one sees “the history of closed hearts, of hearts that do not allow the mercy of God to enter, that have forgotten the word ‘forgiveness’ — ‘Forgive me Lord!’ — simply because they do not feel they are sinners: they feel they are the judges of others,” the pope said.

The first step on the path of faithfulness, he added, is to recognize you are a sinner.

“If you do not feel like a sinner, you are not off to a good start. Let us ask for grace so that our heart is not hardened, that it may be open to the mercy of God, and the grace of faithfulness,” Pope Francis said.

PREVIOUS: Going through a Holy Door? Check this video guide

NEXT: Pope goes to confession, and wants you to as well