Adopting triplets changes a couple’s lives, and their babies 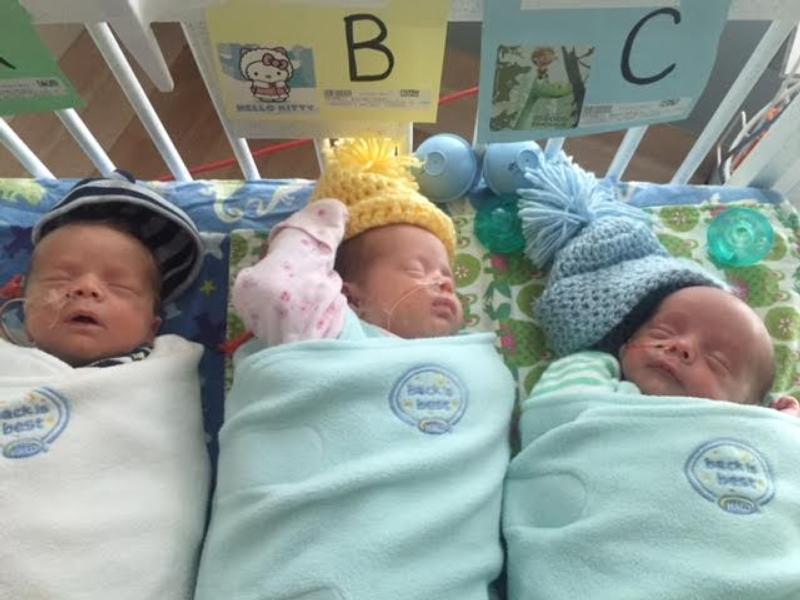 Sebastien, Sophe-Elizabeth and Sidney, the adopted triplets of Kevin and Cari Campbell, are pictured in the neonatal intensive care at a hospital in Oregon. The children were baptized Easter morning at Resurrection Church in Dubuque, Iowa. (CNS photo/Campbell family)

DUBUQUE, Iowa (CNS) — As Cari Campbell scrolled through the content of her Facebook newsfeed one day last August, the post of a friend living in Oregon caught her attention.

Campbell could not have foreseen at the time how quickly that social media post would turn her world upside down or the way in which God was about to bless her and her husband’s lives, threefold.

The post would lead Campbell and husband Kevin to adopt triplets and have them baptized at Easter morning Mass March 27 at Resurrection Church in Dubuque.

The infants — Sebastien, Sidney and Sophe-Elizabeth — were among thousands welcomed into the Catholic Church this Easter.

“When I reached out to the parish this past fall to ask about baptism, the parish had suggested the idea of baptizing them on Easter if it all fell into place. We thought that sounded like a neat idea,” Campbell told The Witness, newspaper of the Archdiocese of Dubuque. “And I was baptized at the Easter Vigil myself when I was 16 or 17 years old, so it just made it extra special.”

The Facebook post that forever changed the course of her and her husband’s lives was about an adoption.

“The birth mom called us the night before she was scheduled to terminate the pregnancy and said to us, ‘If you’ll take them, I won’t do it.'”

A 35-year-old attorney from Dubuque, Campbell decided to send her friend — a woman whom she knew from law school — a private message after she saw that friend post something on Facebook about an emergency adoption situation.

Campbell’s curiosity was piqued; she wondered what might be going on. She learned that her friend’s mother was the pastor in a prayer group at a Christian clinic in Oregon. A woman there was pregnant with triplets but was planning on having an abortion if she couldn’t find someone to adopt all three of the children together.

The pregnant woman had contacted an agency and had found several people who wanted to adopt one of the babies but not anyone who would adopt all three.

“So my husband and I put our names in as people who would be willing to adopt them,” Campbell said of her and her husband, a 42-year-old engineer at John Deere. “We just wanted to put the process on hold. We thought someone else would step forward to take the children. But then the birth mom called us the night before she was scheduled to terminate the pregnancy and said to us, ‘If you’ll take them, I won’t do it.'”

That night, the Campbells agreed to adopt the three children, but they had just accepted an enormous responsibility, and it would take a little time before they were sure they were really up to the challenge.

“About a week later, Kevin and I had a heart-to-heart conversation and discussed whether this was something we could really do,” recalled Campbell. “After talking it all out, we couldn’t think of a good reason not to, so we decided to go for it.”

So the Campbells, who had three cats and a dog, but no children, began to buy baby supplies and to prepare for the prospect of becoming the parents of three small infants. The couple also continued to be in touch with the birth mother who sent them ultrasound photos and kept them up to date with how the pregnancy was progressing.

When she was 30 weeks along, the birth mother sent a text to Campbell saying that she was going into emergency delivery. The triplets were born Jan. 7. They were premature and quite tiny, weighing just over 3 pounds apiece, but were otherwise completely healthy.

Campbell was able to make it out to the West Coast to see the two little boys, Sebastien and Sidney, and their sister, Sophe-Elizabeth, a couple of days after they were born. It was the first of two trips she would make there before they were discharged from the hospital, and she and her husband were able to take them home in mid-February.

Since they were so small and couldn’t fly on a plane and couldn’t sit in a car seat for more than an hour and half at a time, the couple decided to bring them back to Iowa by Amtrak train. “It took us 48 hours to get home. We rented a room in the back. They were the hit of the train,” Campbell told The Witness.

She said the parish has been very supportive as she and her husband have gone through the adoption process.

“We went through a time for about a week and half in January when we faced some legal drama, and we weren’t sure if the adoption was going to go through or not. It was a really trying time,” she recalled. “We really leaned on our faith and the prayer group at our parish to get through it. They were wonderful.”

The Campbells now have full legal guardianship of the triplets; the final adoption decree should be issued in a few weeks. As the couple settles into their new roles as Mom and Dad, Campbell said things haven’t been as overwhelming as they thought they might be.

“They are great kiddos, and my husband and I are pretty calm by nature,” she said. “We’ve learned to feed and change the three of them almost in an assembly line. We prepared for the worst, but it’s been really good so far.

“We haven’t had any freak out moments” she said, but then added with a laugh, “but they’re also immobile yet. Wait until they get moving.”

Campbell said no one is more surprised than she and her husband as things have unfolded, but they also could not be more grateful.

“None of this was our plan, it just happened,” she reflected. “They found us — that’s what my husband and I like to say about the three of them. It all just fell into our laps, but that just make us feel all the more that it was really meant to be.”

Kruse is an editorial assistant at The Witness, the newspaper of the Archdiocese of Dubuque.