‘Doing science is an act of worship,’ Vatican astronomer says 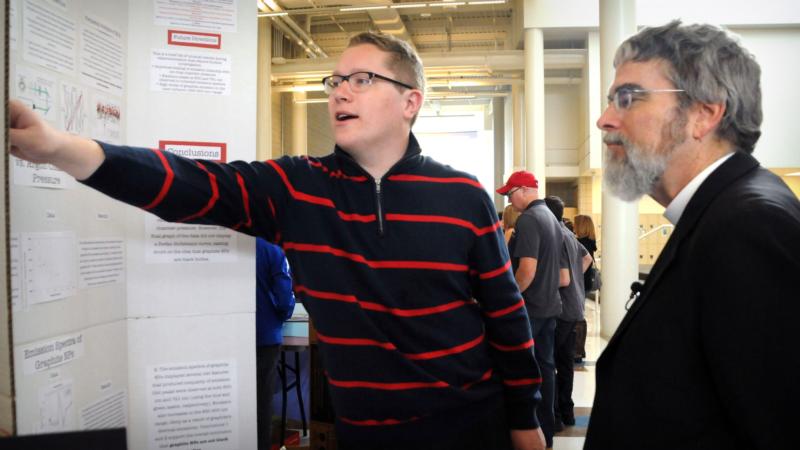 DRAPER, Utah (CNS) — Jesuit Brother Guy Consolmagno finds no conflict between the science he pursues in studying meteorites and the Catholic faith he practices every day.

Director of the Vatican Observatory, the Michigan native explored the intersection of religion and science in a series of presentations in Utah, saying that the two fields are more similar than they are different.

A false division exists between faith and science, he told an audience attending the Summerhays Lecture on Science and Religion March 10 at Brigham Young University. “It’s on the basis of both reason and gut feeling that we make all the decisions in our lives,” he said.

A hint of God’s personality also is revealed in the fact that the universe was created as a rational and reasonable place that can be understood by the creatures that inhabit it, Brother Consolmagno explained. “The very thing that makes science worth doing and desirable to do are the places where we see God, the places where we get a clue to what God is. … Science needs the sense of awe, and that tells me the last and most important trait of God, a God who is awesome.”

At the Interpreter Science and Mormonism Symposium at Utah Valley University in Orem March 12, Brother Consolmagno compared and contrasted science and religion during a symposium that focused on “Body, Brain, Mind and Spirit.”

“If your scientific taste is like an Elvis on black velvet, you’re probably not going to be a very good scientist even if you can handle the math,” he suggested. “That sense of elegance, that sense of knowing the truth and recognizing beauty, is what points us to God and allows us to do the science.”

A day later at the Skaggs Catholic Center in Draper, Brother Consolmagno addressed a diverse audience that included students from Juan Diego Catholic High School who developed science displays for the event. He stopped to ask senior Rex Alley about his experiment, which analyzed graphite nanoparticles using ion trap mass spectrometry. It was a project based on research he had done last summer at the University of Utah.

Alley said he was pleased by Brother Consolmagno’s visit. “I think that as a school we’ve never had such a significant figure in the Vatican come here, especially one who can really inspire a lot of kids to take up careers in science and math,” he told the Intermountain Catholic, newspaper of the Diocese of Salt Lake City.

Other displays included LEGO robots and a student-built Tesla coil, which is used to produce high-voltage, low-current, high frequency alternating-current electricity in vehicles.

“One cannot possibly rank one over the other,” Brother Consolmagno said of the displays. “All of them represent a lot of hard work that only happens when you’ve got passion. And if there’s a message that I have for everybody, (it’s that) you’re doing science not to make money, not to be powerful, not to get girls — it didn’t work for me. You’re doing science because there’s a passion there, there is a joy there. And if you think about it, that’s exactly the joy you get in a moment of prayer, and that’s why doing science is an act of worship.”

Brother Consolmagno described the history of the Vatican Observatory, which began with a telescope on the walls of the Vatican, was formally established in Castel Gandolfo, the papal summer residence in Italy, in 1891 and today includes a facility on Mount Graham in southeast Arizona.

As with his other presentations, Brother Guy sprinkled humor liberally throughout his talk. Describing his time working at Castel Gandolfo, the pope’s summer home, he said, “The floor above the pope’s apartments was the Vatican observatory. As we liked to point out at the time, we were the only people in the entire Vatican, in the entire Catholic Church, who were above the pope.”

Keeping with the subject of his talk, “Adventures of a Vatican Astronomer,” he described spending weeks searching for meteorites in Antarctica.

“There I was in a place just like Psalm 139 describes, where the night is as bright as day. It was a spiritual experience,” he said.

Afterward, he vacationed in New Zealand, where he was asked to help a woman whose husband plummeted down a mountain and died. The woman, who was German, did not speak English so he translated for her.

“I hope we did her some good,” he said. “I know she did me some good, because being a Jesuit brother in the Vatican Observatory doesn’t only mean that I get to do wonderful science, it means that I get to be an ambassador of the Creator in lots of different ways, often ways that I am completely unprepared for, but somehow God is able to make sure I don’t do too badly.”

In his wide-ranging talk and the questions afterward, he spoke about his vocation and the beauty of the heavens he regularly sees.

“The heavens do proclaim the glory of God, and the firmament the work of his hands,” he said. “It is not only my joy and a privilege to be able to get to know those heavens, but to share it with all of you.”

Mischel is editor of the Intermountain Catholic, newspaper of the Salt Lake City Diocese.

NEXT: Ministering to veterans ‘about reconciliation and healing,’ says deacon